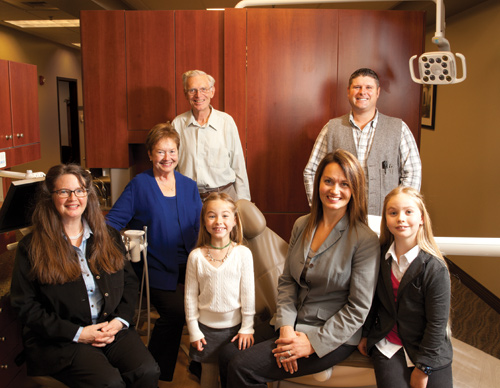 Burkhart Dental isnt just the oldest company in Tacoma; its one of the most successful. Started in 1888 by a dentist, Burkhart now supplies more than $150 million a year in equipment, repair, supplies, consulting, continuing education and other services to more than 5,000 dentists, operating a network of branch offices across the West and as far east as Tulsa, Oklahoma. To keep a growing company running with the attention and service of a family-owned business, Burkhart has a board that includes an outside business consultant as well as family members and company officials. Now boasting more than 150 employees in Washington and more than 400 in total, the firm, which is owned 70 percent by the Burkhart family and 30 percent by employees, has posted 20 percent revenue growth during the past three years. Several years ago, Lori Burkhart Isbell, the fifth generation of the Burkhart family to run the company, told First Impressions, a dental industry publication: People want to be part of an organization that is fair to them and fair to the customer. We are very fortunate to work with wonderful people. They have made our company that much richer.

The sight of Kenmore Airs floatplanes over Lake Union is a quintessential Northwest scene. Its also emblematic of a company started in 1946 by three friends from high school. The descendants of one of those three Bob Munro are today running a company with 25 aircraft in operation, 52 pilots on staff and more than 250 employees in peak season. Kenmore Air Harbor is the largest seaplane operator in the United States, but it also operates international fixed-wheel planes, launching service earlier this year between Nanaimo, B.C., and Boeing Field. The family works together extremely well determining business strategies, both on a daily basis and long term, says CEO Todd Banks, Bob Munros grandson.

The manufacturer of HVAC fixtures and equipment and optical components for the architectural and commercial lighting industries has had to be nimble to deal with a recession that hit the construction business hard. Employment dropped from 175 before the downturn to 110 today. Ecolite, founded in 1970 by Ed Caferro and his son, Ron, developed new products in lighting and air grilles to be more competitive in those sectors and to replace lost business. It also paired with the American subsidiary of a Dutch company to produce wall and ceiling infrared heating panels.