Tod Leiweke, president and CEO of Seattle Hockey Partners, is living the dream 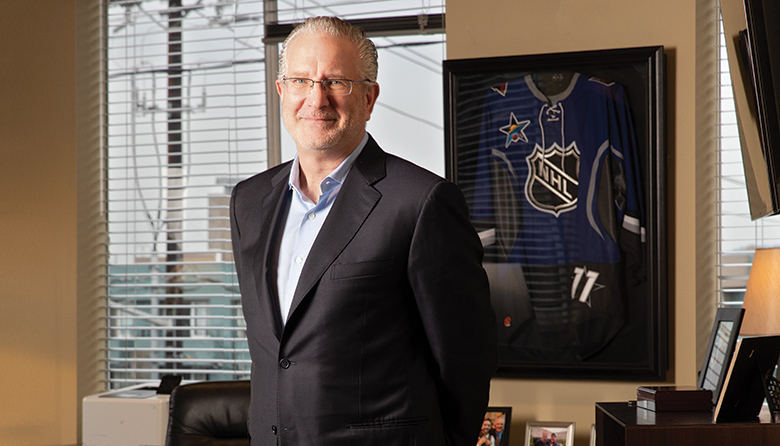 Tod Leiweke is back. And, at age 58, he says he is staying put. The former Seattle Seahawks CEO who engineered the hiring of Pete Carroll and John Schneider returned last year after five years with the NHLs Tampa Bay Lightning, and three as chief operating officer of the NFL, to shepherd Seattles NHL entry. Leiweke believes taking the team from concept to viable entity in a new arena at Seattle Center will constitute the final act of an impressive career in sports management that has spanned nearly four decades and more than a dozen teams:

My mother died of cancer when I was 9. At a relatively young age, my dad was a widower with six kids. He remarried. My stepmother was an absolutely remarkable woman. Tragically, she was diagnosed with cancer. So, my dad lost two wives. And I lost a mother and a stepmother before I was 18. It had a real impact on my life.

My stepmom said, Im not going to make it. You are. Make the most of every day.

Ive tried to think about that every day. If I dont, shame on me. Because she believed in me and knew my life could be full.

I moved from Missouri to Colorado after high school. I thought I would establish residency and go to college, but I ended up getting a job at the Keystone Resort. All of a sudden, I looked up and I was 21 and hadnt gone to college. But doors had opened that I didnt anticipate.

Eventually, I went to work with my brothers [Tracey and Tim], who were starting a professional indoor soccer team in Kansas City. That was the beginning of my sports career.

My first big break was with the Golden State Warriors. I started out as VP of marketing and became president of their arena-development company. I learned most of what I know today during that period working for a fantastic owner [Jim Fitzgerald].

The chance to be No. 2 at the NFL was very exciting. I was really enjoying what I was learning there.

I was still skating, though, skating in Central Park. Ive had a lifelong love affair with hockey, so when Tim started staying, Hey, these engineers think we can actually fix the arena, I was cheering him on. And then he turned the tables and said, Youve been cheering me on. Now you have to come and run this thing.

With the Seahawks and Sounders, I learned a lot about having fans be the centerpiece of what youre doing. I really learned the art form of it here, and I felt these fans were the greatest Id ever worked for. So, it doesnt feel like another stop in a career. It feels like Ive come home.

There were some misgivings when I left Seattle for Tampa Bay. The threshold question was could hockey exist in that community. It took an enormous effort to turn that organization around.

There are 32,000 [ticket] depositors here who I think about every day of my life. I look at my wife and she sees the loving look in my eyes and she knows that sometimes Im actually thinking about fans, not her. Fans are the reason this enterprise exists.

If theres nobility to the mission, then people are inclined to jump in. Ive always been a part of really good teams. I get a disproportionate amount of credit, but I really dont believe any one person is bigger than any team. I give my brother and Oak View Group the credit for having this idea. I give [principal investor] David Bonderman enormous credit for jumping in and saying, OK, Im going to do the team.

I do love the Northwest. I love the rugged nature of this place. And I love its pioneering spirit. I think there are citizens here who are truly remarkable, and I had a chance to work for one in Paul Allen.

If not for Paul, we probably wouldnt have an NFL team. Not only would you have had to get the team back, you would have had to build a new stadium, and thats not for the faint of heart. Not only did Paul build that stadium, but he saved the Seahawks, then created the Sounders, which created enormous community goodwill.

Im absolutely thrilled that Jody Allen is having a chance now to run the Seahawks, because she didnt always get the credit she deserved. She had as much to do with building the stadium as any single person. And its right for so many reasons. The Seahawks best days might very well be in front of them.

Servant leadership is when you dont put yourself at the top of the organization. Youre actually here to serve everyone else. It dictates certain behaviors and a certain management style. Youve got to be moral in how you lead. Youve got to be inspired. So, the people here dont work for me. I really feel as though in many ways I work for them.

We conceded the NHL was right [to delay the expansion of the league until 2021]. Were going to take every day that weve now been given and make the absolute most out of it. Were going to better serve our fans because we had a little more time.

Im so proud of what were doing here. This [arena-redevelopment project] is not the renovation of a building. Its a completely new building with the same roof. Everything will be new under that roof. The building is costing more than we wanted, but these are all rites of passage to get to the other side of having something great.

This town is on fire right now. I know theres some inconvenience coming, but I think history is going to show this is one of the great eras in this towns history.