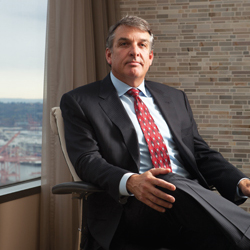 Bob Peters took over the Washington operations of Bank of America in 2009, just as the bank faced a subprime mortgage crisis tied to its acquisition of troubled Countrywide Financial. Now, Peters is leading a drive to get the bank, which built its dominant local presence through the acquisition of Seafirst Bank in 1983, to take better care of its customers.

EARLY LIFE: I was born and raised near Oakland, California. I grew up admiring Jacques Cousteau and came to the University of Washington in 1979 with a plan to study marine biology. I was on a swimming scholarship and made the Olympic development team that year. I also looked at the University of California, Santa Barbara, but when I saw people carrying surfboards on campus, I thought that was too much of a risk. There would be too many distractions.

FAMILY: My great-grandfather emigrated from Denmark and worked for Bank of America for 35 years starting in 1908. He passed away at 90. As a child, my job when I visited him in Fresno was to go into his closet in the morning, grab his wooden leg, put a sock on the stump, put him on the wheelchair and wheel him out to a card table where he would play pinochle with friends. They were all former customers whom he had worked with through the Great Depression.

CAREER: I realized that marine biology was going to be a hard lifestyle from a family perspective, so I got my undergraduate degree in international studies. In 1985, I joined Seafirst Bank in the mailroom. A year later, I moved into the commercial banking business. Starting at the bottom of the company, I learned the importance of having respect for everyone at the company.

CHALLENGES: When I became president in 2009, those were difficult years for the whole community. I remember that my great-grandfather used to say: You cant help everyone, but you help as many people as you possibly can. The impact [of the recession] on our consumer business was significant, as people lost their jobs and werent able to pay their mortgages. Bank of America is doing a lot to help. Weve modified over 2,400 loans here in Washington.

LEADERSHIP: In difficult times, people want to have confidence in the organization they are working for. That means clarity and vision, a commitment to do the right thing and to live by values people will be proud of. You also need the conviction to push forward.

ECONOMY: When I look at the business community today, I see corporations that have very strong balance sheets that have the capacity to invest and withstand a recession, but dont act because they lack the confidence that demand will be there. There is a concern about where tax rates will be and what the spending in Washington, D.C., will be. If there was certainty, there would be movement regardless of what the certainty was.

MARKET SHARE: We have more than a 21 percent share of deposits in Washington state. Our next largest competitor [Wells Fargo Bank] is 11 percent. We are being aggressive on loans today. The first three quarters of 2012, we were at $215 million in new loan origination to small businesses, up about 33 percent from the previous year. Weve hired about 30 small-business bankers this year and now have a total of 43 in the state working with customers with half a million to five million dollars in revenue. Thats where job creation is going to be greatest and most critical to the economy. We believe there is a good opportunity there, given the pullback there has been from other providers in that segment over the last several years.

GROWTH AREAS: There are three industry clusters that will drive most of the growth in Washington: aerospace, technology and health care. Some of our biggest companies are there, including Boeing and Microsoft and all their suppliers.

THE BANKS COMPETITIVE ADVANTAGE: We can help individuals whether they work on a factory floor or run the company and whether their needs are local or global. We have people in 40 countries who offer all the support you need to operate abroad. We can help milk processing companies hedge their exposure to milk prices. We help hedge natural gas. We can help mitigate interest rate exposure. With respect to consumers, we are committed to offering clarity. We want to make sure that the average person understands what
he or she is getting from us as a financial
services company.

TECHNOLOGY: We recently moved our [computer] system to our national platform. That allows customers in Washington state to have access to all of the banks products and services. We want to make sure our clients can do their banking when and where and how they want. You can deposit a check or transfer money all from your mobile device. You dont need to go to a banking center.

EDUCATION: Impacting young people is one of the best investments you can make in life. So Ive tried to limit my outside endeavors to what we can do to help education. Early in my career, I had a formal mentor who helped me and later, I had many informal mentors. At the Seattle Chamber [he is co-chair of the chambers education task force], we want to mobilize our 2,200 company members and their 700,000 employees to be mentors to middle school and high school kids. We want them to be role modelsto take kids to the tunnel project and show them why geometry might be relevant for a job they might get. We can help the students create a vision for themselves and a passion for what jobs there might be in the future and why its important for them to stay in school.

IMPROVING SEATTLE SCHOOLS: Whether you are a for-profit business, the public sector or the school system, you have to hold people accountable and responsible for improvement. But there are a lot of inputs. It is not easy to determine if a teacher, a principal or a school is necessarily failing. You have to have competent people who understand their roles and responsibilities. And they have to be held accountable.