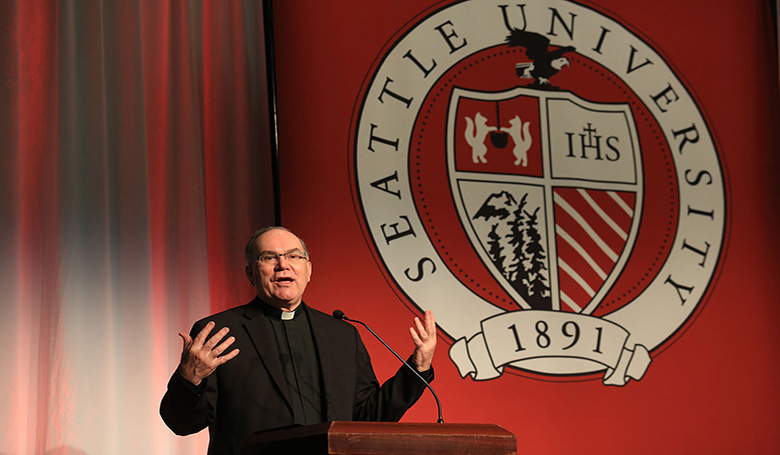 Seattle University President Stephen Sundborg, affectionally known as Father Steve, has been honored as the 2019 Seattle-King County First Citizen, given for community leadership and civic engagement.

Sundborg, who has led the Jesuit Catholic university for 22 years, has been described as a selfless leader with a deep commitment to the community. Sundborg will be honored at a banquet May 23.

I have been consistently impressed with his dedication to students, faculty, and staff, his tempered and collegial leadership abilities, and his obvious heart of a servant, said David Sabey, president of real estate development firm Sabey Corporation and a member of the universitys board of trustees.

Enrollment has grown 30 percent to nearly 7,500 students during Sundbergs tenure, and the university has added two colleges, a law school, a library and several other buildings. The university will break ground in May on a Center for Science and Innovation.

Both U.S. News & World Report and The Princeton Review have recognized Seattle University as among the best colleges on both the West Coast and in the United States, and the university has also been lauded for its sustainable practices by the Sierra Club.

Father Steve has provided leadership, mentorship, and service to thousands of young people pursuing an education at SU and thousands more during his 20 years as Seattle U.s leader, said Diane Douglas, who got to know Sundborg during her years as director of Seattle CityClub. He has always struck me as a selfless leader keen on doing more than his part to make this region the best it can be.

Sundborg, who has been involved with several professional and charitable organizations, taught theology at the university before becoming its 21st president.

Sundborg is the 81st recipient of the award, which has been given by Seattle-King County Realtors since 1939. Previous winners have included some of the biggest civic and business leaders in the region, including former U.S. Senator Slade Gorton, the late Paul Allen and former Mayor Norm Rice. Last years honoree was the Pigott Family, which founded Bellevue-based Paccar Inc., a global manufacturer of medium- and heavy-duty commercial vehicles.