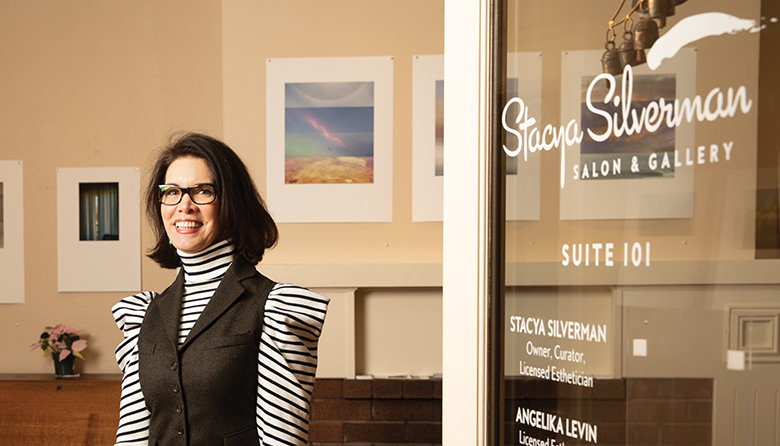 What is your official title?
Im an aesthetician, but a lot of times when I go to parties, people hear anesthesiologist. I get a better reaction to that.

Do you correct them?
Sometimes. But if Im never going to see them again, maybe not.

What do you do?
Mostly, I do eyebrow waxing. But, since I own the business, Im also the receptionist, the toilet cleaner, the supply orderer everything and anything.

Did you always want to be an aesthetician?
Not at all. I majored in theater and thought I would go into not-for-profit management of the arts, but that all changed in 1991, when I was working at Seattle Repertory Theatre. One day, a computer showed up on my desk I was a technophobe at the time and I was sent to a computer class where I couldnt understand the instructions and couldnt make my computer do anything. And so, in a total panic, I decided two hours into the class that I had to find a way to make a living that didnt involve computers. Within three months, I started beauty school. By the way, I later learned that my computer in that class was broken.

Do you like to pick at things?
Yes. In fifth grade, I made friends with a girl who had a habit of pulling out her eyelashes and eyebrows. I thought it was weird at first but then I started doing it, too. I conquered that habit, thank God, and transferred my obsession into pulling out other peoples hair.

Have you ever gone out of business?
No.

Is the aesthetician business affected by the state of the economy?
Not really. In fact, when the economy bottomed out in 2008, I was busier than ever. People do give up luxury items but they wont give up spending $12 to get their hairy upper lip waxed.

Have you ever discovered something on a persons body that ended up being a health issue?
Lots. I had a client who came in for facials and she kept asking me to extract something off her nose. I knew it wasnt a pimple and I told her she needed to get it seen and she kept putting it off. Turned out to be cancer that had bored into her cartilage and she had to have her nose amputated. Luckily, they were able to reconstruct it with the back of her ear and its beautiful.

Youre known in Seattle as the Waxing Queen and the Brow Shaper. Whats the secret to maintaining attractive eyebrows?
Do very little. The thicker and more natural they are, the better.

Your beauty business is also an art gallery. Is there a relationship between waxing, plucking, skin care and art?
I just wanted to walk into my business every day and be surrounded by beautiful things. And I dont need the art to sell in order to pay the rent, so the artists arent under pressure. Hopefully, they sell. But its OK if they dont.

How would you describe your relationship to money?
When I was young, we were always broke and we got evicted a lot, so when I got my first little jobs, like babysitting, I would spray-starch and iron my money to make it flat and perfect. Then Id hide it from my father because he liked to borrow it for cigar money.

If money were no object, what would your life look like?
Id give more to the causes I believe in.

Whom do you admire?
Shirley Chisholm, the first black woman elected to Congress. Shes my favorite because she had a funny voice and cat glasses and she got death threats and she still got up there and made her speeches. She was brave. I have three Shirley Chisholm T-shirts.

Any advice youd like to give to your younger self?
Rather than cave to anxieties and fears, admit when youre scared and get help.

What four guests would make for the perfect dinner party?
Shirley Chisholm, Julia Child, Beto ORourke and the Notorious RBG.

As an audience member, what turns you on?
I love drag queens! We lived in Hollywood when I was a little girl and my mom used to take us to these free talent shows that, in the early 70s, had been taken over by drag queens. I think thats what got me into cosmetics and wigs and high heels and dresses with big slits. Who doesnt want to see a man all dressed up like a woman? No one!

Finish this sentence: Stacya Silverman is …
… a wonderful house guest.