Q&A: John Bennett on Revitalizing the ‘Last Bastion of Reality in Seattle’

For more than 20 years, John Bennett has been restoring historic buildings all over the city, and working to revive Seattle's Georgetown neighborhood. 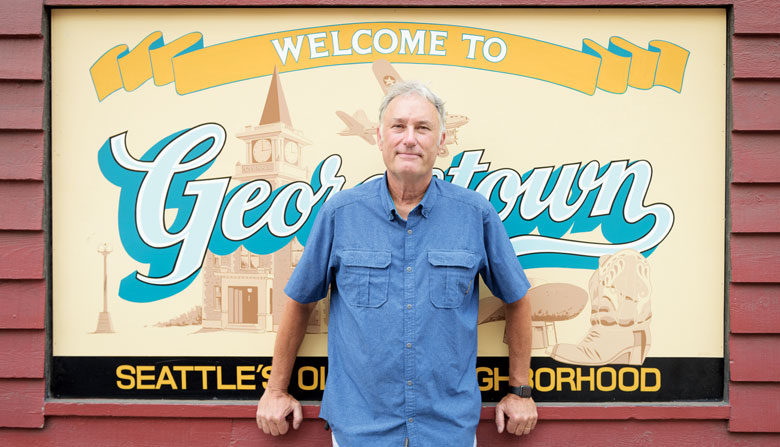 ON A MISSION: Since 1996, John Bennett has been intent upon revitalizing Georgetown. He helped found the Georgetown Merchants Association and the Friends of Georgetown History. Photo by John Vicory.

John Bennett grew up in northern Virginia and moved to Seattle in 1974. He has worked as a carpenter, locksmith, ditch digger, antiques buyer/seller and restorer of historic buildings in West Seattle, where he built the Luna Park Cafe, and in Georgetown, where he has revived several buildings and serves as the neighborhoods unofficial mayor. Learn more at johnbennettproperties.com.

Describe what you do for a living. I fix things.

Youve been buying and restoring historic buildings for 35 years. Wouldnt it be cheaper to knock the old stuff down and build from scratch? Absolutely! Im a preservationist to a fault.

Why do old buildings matter? Because they tell the story of the city. Once theyre gone, thats it. You cant build an old building.

Tell me what you like about old buildings. The architecture and the quality of materials and construction are amazing. The other day, a guy I was working with in a 100-year-old Georgetown building was going to drive a nail into a beam and I handed him my drill because I knew there was no way to hammer a nail into that beam without bending it.

When did you buy your first building? I moved to Seattle in 1974, during one of the Boeing crashes, and was looking for an apartment when a realty-agent friend suggested I buy a house instead. So, I bought my first house at age 19 for $7,000.

Do you still have it? Yes! Im superstitious.

Are you a good landlord or a bad landlord? I dont want to pat myself on the back but Im honest, my rates are reasonable and I treat all my tenants more than fairly.

How do you choose your tenants? I have a lot of artists and I love small businesses, so all my retail tenants are sole proprietorships.

What is the hardest thing about owning and maintaining buildings? In the early 80s, I bought an apartment building from an older guy who was retiring and when he handed me the keys, he said, Son, do you know what your biggest problem is gonna be as a landlord? I said, Electrical or plumbing? And he said, Nope. Parking. And he was absolutely right. I spend one-third of my time dealing with parking. My second-biggest problem is garbage.

Describe the vibe of Georgetown. Everybody knows everybody. I get here in the morning and the business owners are literally sweeping their front steps. Its the last bastion of reality in Seattle.

How do you feel about the new construction going up in Seattle? In 25 years, people wont be saying, Wow, look at that cool building! I wonder who designed it?

What will they be saying? Oh, my God. How did we let that happen?

If you were hitting the job market today, would you be able to pursue the same line of work? No way. Everything now is so expensive, plus banks have gotten really conservative, especially since the last crash. I was in the right place at the right time.

Whats important to you? Working and producing. Id rather buy a really crappy building and fix it up than buy a building thats turnkey. Im a junkie for the end results.

Whats the biggest mistake youve made as a businessman? I didnt buy buildings in downtown Seattle when I had the opportunity, so perhaps I could have been less careful.

Is there a specific building you didnt buy when you had the chance and now wish that you had? The Austin Bell Building [on First Avenue] in Belltown. It was a beautiful, solid building and I regret not buying it because it ended up being gutted. The developers saved the facade but ruined the building.

Are you a numbers guy or do you fly by the seat of your pants? A bit of both. Ill definitely get a gut feeling, but it all boils down to numbers.

Describe the role that money plays in your life. Having money makes life a lot less stressful but Im not greedy and I dont really care about money. I do what I do for the joy.

You have lots of stuff, memorabilia are you a hoarder? Well, I say no. But other people would probably not agree with that.

What song would you like played at your funeral? I want Eddie Vedder to play Black.

Youre stuck on a desert island and can have one book, one record and one food. The Stand by Stephen King, Sgt. Peppers Lonely Hearts Club Band and beef anyhow, a Filipino dish.

Name your biggest indulgence. My house in Palm Springs. I know I can afford it and I know I love it, but its expensive to maintain, I dont use it very much and my business brain says, This piece of real estate does not have a positive cash flow!

Is there a law or rule you would most like to enforce? People driving in bus lanes.

Whats the best part of the process of restoring buildings? When the soul comes back to the building. Its nothing you can take a picture of, but its there. It comes back.