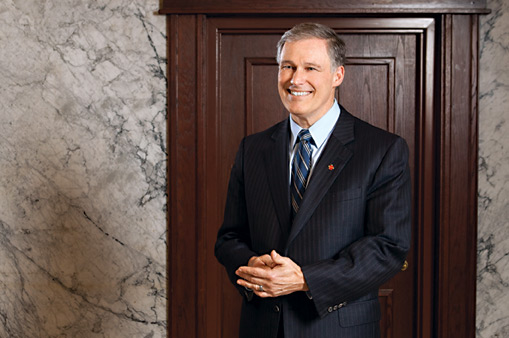 At the annual Kitsap County Democratic dinner in February, Nancy Nystrom pushed through the crowd looking for Jay Inslee, the seven-term congressman and Democratic candidate for governor of Washington.

When Nystrom spotted him, she marched up, her head barely reaching Inslees shoulders, and laid out why Kitsap County needs a four-year college. Inslee listened intently and expressed support for the idea. Then he asked if she had thought about a school mascot. How about the Ravens? he said with the slight lisp that softens his blue-eyed, gray-at-the-temples, former-football-player good looks.

For Inslees supporters, these brief interactions reflect the man they admire. He is a relentless campaigner who will drive an hour to an event if only to speak for five minutes and banter with a few constituents. Hes a man who focuses on their needs rather than his own agenda. But this style also fuels concern that he isnt as focused a campaigner, and might not be as capable a governor as his Republican opponent, Rob McKenna, Washington states current attorney general.

Born in Seattle in 1951, Jay Robert Inslee was named for a football player at the University of Washingtonpossibly J.R. Savage, but Inslee doesnt remember. His parents, who worked as summer guides in Mount Rainier National Park, took their three sons hiking and taught them the names of wildflowers and birds. This exposure to Northwest nature is the reason Inslee cannot stop talking when the conversation turns to the environment.

It could be his strongest suit: Environmentalists, who hold great sway in Washington state, are strongly in his camp. Thats not surprising. Inslee, 61, envisions a Washington where clean energy rules and where an advanced biofuels research center could thrive. Public education institutions would graduate more tech-savvy workers and industries could train people in specific tasks through community colleges.

In 2008, Inslee cowrote Apollos Fire, a book that outlines his ideas on clean energy and how it deserves a chance to compete with traditional energy. He dedicated the book to his parents, Adele and Frank. He promises to create more jobs for middle-class Washingtonians, and he believes that clean technology may be part of the solution. Helping the Department of Defense meet its biofuels goals, he reasons, would increase the number of jobs in agriculture. He would raise the bar for the states Energy Independence Act, which demands that large utilities produce 15 percent of their energy through renewable resources.

Beyond the environment, Inslee has a wide-ranging business platform. He says he would bolster the biotech industry in Seattle by attracting new businesses through tax incentives, including a short-term B&O tax relief component. In agriculture, he would find long-term water solutions for farmers in Eastern Washington. For the IT and aerospace sectors, he would push for more apprenticeships and technology courses to graduate eligible workers.

He wants to direct more money to education, which should delight educators, except that he supports teacher evaluations, which unions have battled. We have to no longer accept the situation where it takes two or three years to remove a teacher who is substandard from our classroom, Inslee said in an interview at his campaign headquarters in downtown Seattle. Im going to remediate or find a new profession for those teachers.

In the acknowledgments for Apollos Fire, Inslee thanks his wife, Trudi, whom he describes as a serenity in the eye of the storm. Campaign staffers refer to her as the rock. Inslee met her as a sophomore at Ingraham High School in North Seattle. She remembers seeing him walk through the doors of their portable classroom and being moonstruck. Their senior year, in 1969, he was the varsity quarterback. He also helped the boys basketball team win the state title.

They married at 21 and soon after moved to Selah, north of Yakima, where Inslee prosecuted drunk drivers for the city. Trudi says she attended his first closing argument before a jury and remember thinking, Hes good in court. He knows his stuff.

In Selah, they had three sonsJack, Connor and Joeand raised them on four acres of hayfields surrounded by apple orchards. What happened next in their story is mentioned at nearly every political stop. The Inslees, frustrated that the local school district construction bond had failed seven times, pushed for an eighth vote. Finally, it passed. But when the Legislature reduced state matching funds for construction bonds, Inslee drove four hours to reason with those chowderheads. Instead, they reasoned with him. When he returned home, he told his wife that Democrats had suggested to him over lunch that he run for the state Legislature.

We were standing in the kitchen and I said, What? Trudi Inslee recalls.

Its a good thing, he said.

But itll be really hard, she countered. Youre a Democrat in a Republican district.

In 1988, Inslee defeated Lynn Carmichael, the mayor of Yakima, for the open legislative seat and started a career in politics. When he ran for Congress four years later, his campaign manager, Lisa van der Lugt, says she had never met anyone with so much passion for campaigning.

He loved being out on the road and coming back with stories, van der Lugt says. Once, there was this guy walking down the street with some sort of reptile on his head and Jay was talking to him. I said, Jay, did you get his vote? and Jay said, I just started talking to him. He had some interesting ideas.

Inslee, again the underdog, won that 1992 election. Then came the Federal Assault Weapons Ban vote in 1994. Inslee held town hall forums and asked for feedback. Ultimately, the way Inslee saw it, it came down to his job security or the life of a child.

The night before the vote, he told his wife: Tomorrow the assault weapons ban is probably going to cost me my job.

Trudi responded, So be it.

That fall, Inslee was voted out of Congress, flushed out by the Republican wave of 94 along with five other Washington state Democrats.

The Inslees returned to the west side of the Cascades in 1995. Inslee had wanted to run again in Yakima but his wife discouraged him. Jay, she said, this is going to be such an uphill battle if you want to stay in Yakima. Besides, Trudi liked the idea of being closer to her aging parents.

The mid to late 1990s proved a political whirlwind for Inslee. He ran for governor in 1996 but lost in the blanket primary to King County Executive Gary Locke, who was elected governor that November. At the time, Inslee blamed lack of name recognition statewide.

In 1998, he ran for the congressional seat in the 1st District, a swing district that before the most recent redrawing of district boundaries covered a swath of the central Puget Sound region from Hood Canal in the west to Monroe in the east. Inslee won that racealbeit with less than 50 percent of the vote because of a third candidateand steadily built his base. He triumphed in his past four elections by comfortable margins, but decided in March to resign from Congress to devote full time to running for governor, taking criticism for quitting on his 1st District constituents and forcing the state to conduct a special election in November to determine a successor who will serve for all of one month.

The Inslees live in a 1931 brick house on Bainbridge Island, within walking distance of the ferry landing and a mile from their two grandchildren. Inslee tells audiences he is a candidate with one foot on each side of the mountains. He says with the rapid-fire delivery of an auctioneer: Im the candidate who has driven a bulldozer in Bellevue and has painted houses in Burien and has washed dishes and waited tables in Edmonds, who has prosecuted drunk drivers in Yakima, who has taught community college in Yakima, who has grown alfalfa in Eastern Washington, whos represented the Hanford nuclear workers. I am the candidate in this race with work experience, which really acquaints me with the real working lives of working middle class people in the state of Washington.

In these speeches he occasionally mentions that he was born in Seattle, and that his father taught biology to Jimi Hendrix at Garfield High School. To a Rotary Club group at Ivars Salmon House on Lake Union, he gestures toward the water and notes that his grandmother used to live above a floating bar. She would lower her pail to the bar below to fetch some ale. To keep the suds down, she would grease the pail. Inslee uses the story as an illustration of innovation. 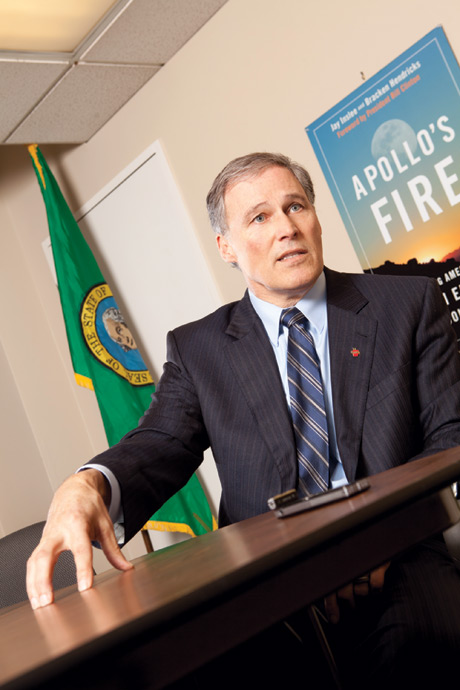 The folksy persona resonates with independent voters outside the Puget Sound region, but within the heavily Democratic-leaning Seattle area, Inslee faces an unusual obstacle. His opponent, McKenna, is a Bellevue resident who seems to appeal to moderate, college-educated Democrats. If elected, McKenna would be the first Republican governor of Washington since John Spellman was elected in 1980.

Joel Connelly, the veteran political columnist at seattlepi.com, has described the race as between two types of individuals who kind of defined themselves early in life. One is the student body president [McKenna was president of the student body at the University of Washington]. The other is a high school athlete, the high school quarterback. Connelly says Inslee is possessed of a raw optimism but will have to prove himself as a man of substance, which, although evident in his book, may not be immediately obvious on the campaign trail.

Inslee views himself as a wonk with maverick tendencies. He repeats that he was among the few in Congress to oppose the war in Iraq, that he opposed the 2008 bailout of the United States financial system and that he supported gay marriage before it was politically hip. Still, the McKenna camp points out with some glee that Inslee never led a congressional committee or subcommittee in his 13 years in office, a sore point with Inslee.

Waiting for title to exercise vision is insane to me, he says. When asked about his lack of management experience, he points to other political leaders with similarly slim executive leadership resumes, including two American presidents: John F. Kennedy and Barack Obama.

Back at the Kitsap Democrats dinner, Fran Moyer, a retired nurse and former legislative aide to Inslee, remembers when the former congressman kayaked the waters of his district with Bill Nye the Science Guy and others. Fog had descended and it became impossible to see land. Eventually, Inslee, who was familiar with the local waters, helped guide the group ashore.

Moyer doesnt tell the story to illustrate a greater truth about her former boss, but it does speak to Inslees cool and his ability to strategize on the fly.

Connelly, meanwhile, says that people shouldnt underestimate the old quarterback, as he calls Inslee, because he has often been the underdog who ended up wining the election.