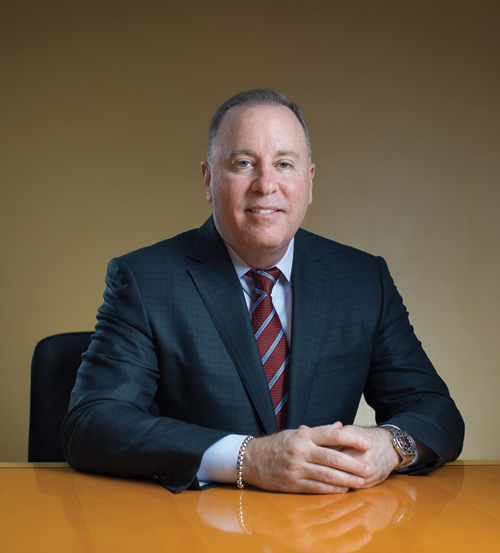 Mark Mason is chairman, president and CEO of HomeStreet Bank. A turnaround wizard, he took control of the Seattle-based bank in 2009 and transformed it from an institution in danger of failing to the states largest provider of mortgages for homebuyers.

EARLY YEARS: My father ran a series of funeral homes in Southern California, and we lived, at least through my grade school years, either next door to or above mortuaries. Growing up, I often worked in the business. Ive gone out and cleaned out car wrecks and murders. During the holidays, lots of people die. We would be called to pick up cases and prepare them. My parents taught me to find pleasure in work and expect to work your entire life. For my father, that was the mortuary business. He enjoyed serving people and took pride in the work. That work wasnt attractive to me.

TURNAROUNDS: You become a turnaround expert by making bad job choices. I worked as an accountant before becoming CFO of a commercial real estate development company. I had to restructure its finances several times to save the business. Then I became CFO of a bank that had been recently recapitalized by a famous investment bank. I had to restructure and recapitalize it again a year later. I hadnt done my due diligence, placing my confidence in that very famous investment bank. Once youve done a couple successful turnarounds, people come to you.

CRISIS MANAGEMENT: In every [turnaround], I fired very few people. In each case I concluded that poor leadership and strategies were the problem. When you changed the leadership and the strategies, the employees became better at what they did. Its sort of like taking the lid off a box and letting the light in.

BANK TURNAROUNDS: The speed with which you do things is critically important because you only have so much time and your time is denominated in capital. Your shareholders take a back seat to your regulators, whose chief concern is that you maintain sufficient capital. The faster you can resolve problem assets, the more time you have to turn the bank around. While it sounds simple, in practice its complicated. The people assigned to deal with the assets have been trained to maximize the recovery on the assets, but thats incorrect in a turnaround. You must maximize the velocity with which you get rid of problem assets because the longer you hold them, the more they fall in value. You have to reward [loan officers] for taking offers available today because tomorrow the assets will be worth less.

GROWTH: A lot of people think shifting from crisis to growth requires different disciplines, but they are simply different strategic plans. You cant turn around a company simply by cutting expenses; one of your first jobs is to start growing. If you accept the premise that a turnaround involves improving revenue, well, you are already a growth organization. Its just that the world doesnt recognize it yet.

HOMESTREET: Their problem was loans to the homebuilding industry. When the recession hit, many developers went bankrupt. When I was recruited in September 2009, I saw a company that had made good, ethical decisions not to do subprime mortgages and no-documentation loans. But that also meant their share of the mortgage market had shrunk.

MORTGAGES: I saw that we were entering the most significant decline in interest rates wed seen since the Great Depression and that this would spur a wholesale refinancing of most of the mortgages. So I recruited people to grow the mortgage business. Today, we have 440 loan officers, up from 100 in 2009. We became the states largest mortgage lender [to homebuyers], up from seventh. When I got to the company, we had 550 employees and 30 deposit branches and a mortgage lending office. Today, we have 1,900 employees and 100 offices in Washington, Oregon, Idaho, Hawaii, California, Utah, Arizona and Nevada. Our long-term strategy is to have a major presence in each of those markets. If we do our job too well or too poorly, we become candidates for acquisition. But its not my job to determine that. Its my job to determine a strategy that makes the most sense for this institution.

ADVANTAGES: Seattle has lost Washington Mutual and a number of other institutions. Each failure created a vacuum in the middle market that created opportunity. Ongoing consolidation will create more opportunities for the survivors because the larger acquirer tends to drop smaller customers. Were growing at 5 percent or more per quarter because we have a large commercial real estate origination business, we are back in the residential construction business, and we have a large single-family mortgage business to go along with our commercial and industrial lending. Our total commercial loan portfolio is roughly $2.7 billion. We are still looking for commercial bank acquisitions to supplement organic growth.

MARKETING: Banks are the third-largest spenders on media behind cars and fast food. But all the ads use the same words and colors. We hired Wexley [School for Girls] to differentiate us. Two years ago, when we ran the TV commercial during the Super Bowl of the bar scene where the banker gets in the way of a punch, I got an email from the regional president of a large bank who said: It was the first time in a long time I felt comfortable being a banker … and for the rest of the game, all that was heard in our house was banker down!

CULTURE: The HomeStreet culture existed long before I came and I was careful not to damage it. First and foremost, employees have to do the right thing, even if it means sending customers down the street to another bank if we dont have the product. We are in our 95th year and we are one of the top philanthropy givers. I think thats a culture that will work in any market.

SEATTLE AS FINANCIAL CENTER: A lot depends on what financial companies are headquartered here. We never expected Bank of America to be run out of Charlotte, North Carolina. There are several banks in the Puget Sound region that are very well managed. Will some be acquired? Sure. But today, Puget Sound is a greater center of financial influence than as far back as I can remember.