Executive Q&A: A Sense of Place 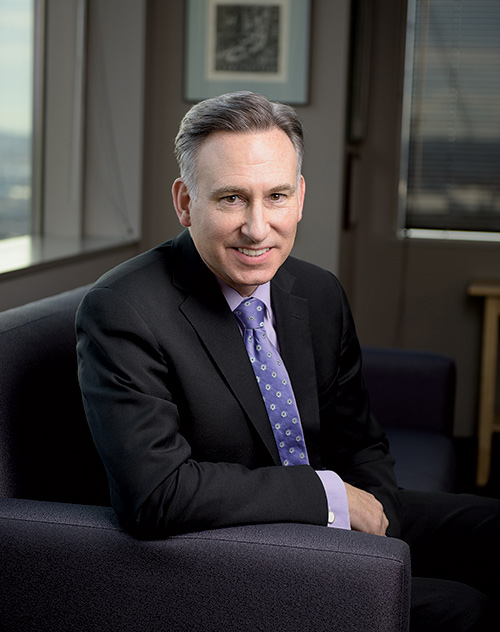 Raised in West Seattle, and with degrees in law and urban planning from the University of Washington, King County Executive Dow Constantine is intent on building a county government in which public employees think creatively to find ways to more efficiently take on such tough challenges as transportation, sustainability and early childhood development.

EARLY YEARS: My parents [both teachers] were civic minded and we were encouraged to think about things beyond our personal needs. I was a big consumer of TV news from an early age. It might have seemed pretty odd for someone as young as I to be watching The Huntley-Brinkley Report. [The NBC evening news show ended in 1970 when Constantine was 8 years old.] I was always interested in politics, government and society. I ran for student body president in high school. That led me to study political science at the University of Washington, which led to an internship with [State] Senator [Phil] Talmadge. I got more and more involved in politics until it took over my life.

WHY POLITICS: You get an opportunity to improve the place in which you live. After being involved in public life for 25 years, I start to see the impact Ive made here and there in little ways a piece of open space that was preserved, a historic building that wasnt torn down, a great piece of urban infrastructure that was created. Its gratifying to know that youve done something that will outlive you.

BEST STARTS FOR KIDS: Its [a King County initiative] based on the science coming out of the UWs Institute for Learning and Brain Sciences about what happens in a childs development in those first three years. By preventing such things as domestic violence and homelessness and by supporting parents, there is a greater chance for the child to avoid adverse experiences such as incarceration, mental illness and addiction. We will never reach a day when every child reaches adulthood ready to succeed and thrive and contribute to the community, but when we start reversing the trend of more and more public dollars going to reverse bad outcomes, and more being invested in infrastructure and amenities that make life better for all of us, that would be a measure of success.

LEAN MANAGEMENT: I want to create a government that will not only be more efficient but also incorporates the mechanism of continuous improvement so that as circumstances change, the creativity of our employees is applied to remake [government] to deliver the most services for a given dollar. In our [county] jail, we went through a lean process to become much more precise in evaluating those with a risk of suicide. Working with two agencies, we reduced by 90 percent the folks who are on 15-minute bed checks so we could focus resources on people who are truly a danger to themselves, while also saving $2 million a year. With wastewater capital projects, we reduced litigation around property acquisition, thereby cutting a year off of development and saving hundreds of thousands of dollars per project. Improvements like these increase public trust in our stewardship [of public funds]. And it frees people up to do the work that inspired them to do public service in the first place.

COSTS: When I came into office [in 2009], we had costs going up 5 to 6 percent a year. I said we would reduce our expenses to the rate of inflation plus population growth. Weve used these techniques successfully to do that. But there is still a gap between revenue growth and the growth in population and inflation because of the 1 percent lid on property tax increases, so we have to reduce services.

CLIMATE POLICY: It is perhaps the most important issue that we will face in my generation. And we know that much of the social, economic and political change happening in this country is coming from metropolitan regions where the new ideas are fostered. We can show the rest of the country that it is possible to begin turning the tide. [King County] has joined together with our cities to set a goal of 80 percent reduction of emissions by 2050 with a focus on transportation and the built environment, where the most climate emissions are generated. For King County, we can find ways to offer more transit to folks. That improves our emissions profile because it allows people to leave cars at home. And we are continuing to make transportation cleaner as well. I just took delivery on our first battery-powered electric bus.

GREEN BUILDING: In the built environment, performance-based building codes are the new frontier. You want a code that encourages excellent filtration of storm water or low energy use or the preservation of tree cover. Then, if someone comes up with a new idea, we can measure it and say, Yes, its going to work. We have more capacity than some of the smaller cities, so we can take the lead on creating new approaches and then share them with other cities that may choose to modify them and adopt them for their own purposes.
LABOR IMBALANCE: In the short term, we need more [workers receiving] skills training. In King County, for example, we have 400 aerospace companies that account for 30,000 direct jobs. Those companies are concerned about the available workforce. They go to great expense to go around the world to fill jobs even while we have hundreds of thousands, even millions, who are underemployed. In the long term, we need economic development and equity and social justice. We need to ensure that each kid gets off to a good school. Fifteen dollars an hour isnt a path out of poverty.

IMPACT: There is a big temptation to make a splash, but things that last require years of quiet work. Part of our job is to show people we are good stewards of the public funds. We have a lot of good examples to show people.