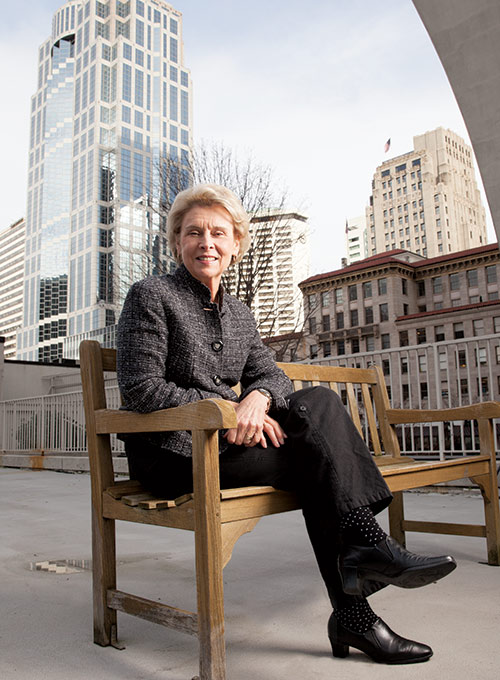 Since ending her term as governor of Washington in 2013, Christine Gregoire has lived a somewhat less public life taking care of grandchildren, chairing the 2015 advisory committee of the Export-Import Bank of the United States, and serving on the boards of the Fred Hutchinson Cancer Research Center and the William D. Ruckelshaus Center. She is coming out of semiretirement to head up a new initiative aimed at raising Seattles awareness of itself and its international profile.

POST-RETIREMENT: Id been out of office for only a few months when Brad Smith [now president of Microsoft] invited me to lunch. He wanted my takeaway from being governor. I told him I came home from overseas trips with this wonderful sense of enthusiasm about Seattles phenomenal reputation only to find we were unaware of our reputation internationally. Were too shy to talk about our assets, and thats not healthy for us. So he said, Well, lets get to work on that. At the time, Phyllis Campbell was working with the Seattle Metropolitan Chamber of Commerce and the Boston Consulting Group on the question of how to make Seattle a global city. Brad asked me to help. I traveled with a group of people to San Francisco, Boston, Austin and New York to look at what they were doing. We looked back on the history of Seattle and early days of dramatic civic leadership. We realized that if we wanted to remain a globally competitive international city, we would have to step up to the challenge.

CHALLENGE SEATTLE: Last March, Brad asked me if I would be CEO of a new entity called Challenge Seattle. Its made up of CEOs of 17 organizations [including Microsoft, Amazon, Starbucks and the Bill & Melinda Gates Foundation]. We have dinner about three times a year. We dont lobby. Everybody contributes what they want to, but they must commit to five years of support. What I discovered was we have a group of CEOs who dont know [each other], so they cant take advantage of opportunities for collaboration. These CEOs are civic minded; they want to do good. [Boeing Commercial Airplanes CEO] Ray Conner called me last summer to ask what we could do about the terrible forest fires in eastern Washington. I made some calls. Within 48 hours, we had full participation of all 17 CEOs to the tune of $750,000 [to contribute to the Red Cross]. That gave us a sense of what we could do. With Challenge Seattle, we are focused on four things: education, jobs, selling Seattle and transportation.

EDUCATION: We are a major partner with the University of Washington in the creation of GIX [the Global Innovation Exchange]. Its an 18-month masters program with a multidisciplinary approach to learning. The CEOs might do some teaching and mentoring. In turn, they get a first look at students they might snatch up and hire. There is a development group in China that wants to co-locate an incubator next to GIX to house startups from China. We are also partnering with the Road Map Project, which encourages students to seek college educations and certifications. Well offer the business perspective. Well have CEOs talk to students in person or through videos. Ray Conner might talk about how he started as a mechanic. The CEOs can show students what they have to do to get into college and get those $80,000 Boeing or Amazon jobs.

JOBS: We have lots of efforts to promote economic development in the region, but not a lot of coordination. The single best asset we have to attract companies to the area is our CEOs. If Seattle has Alibaba on the hook as being interested in locating here, we would have the CEO of Microsoft give them a call. When CEOs travel, we want to know where so they can visit a company we might want to attract. We tell the economic development agencies, Weve got the big dog in the room. You make it work and our asset is waiting there to help you out. [Howard Schultz at] Starbucks asked us to help re-create a program they did in Chicago where they brought together unemployed 16- to 24-year-olds to meet with employers. At the end of the day, thousands were hired. We said, Sure, well do it. We estimate there are about 10,000 young people here that fit into that category.

SELLING SEATTLE: When the rest of the world hears Washington, they think you mean D.C. For [outsiders], the state of Washington is Seattle. We grow grapes, we harvest wheat, we have Microsoft. And if we want to prosper, we have to get over our humbleness a tad. We have such a track record of success, whether its in music, food or business. We will soon launch a domestic ad campaign showing famous Seattle personalities with the slogan Incredible Works Here. A campaign in China will show magazine covers featuring [famous] Seattle-area executives such as Jeff Bezos. This is not about tourism. Its about attracting companies and talent.

TRANSPORTATION: The people in this community will embrace growth if they believe someone is paying attention to transportation. I put together a group of experts who will come up with some metrics about what a good transportation system should look like. We also want to create a think tank of leading experts at the University of Washington that can look at the cutting edge of transportation technology. The Good To Go pass works for Highway 520 tolls, but its useless on the ferry or bus. Seriously? It ought to have a single app for everything. There ought to be a real-time system managing traffic like in London, so that if there is one accident, we can divert everybody and traffic doesnt come to a grinding halt. We want to show how we take the driverless car and introduce it into the community. We have unique challenges. We need solutions that adapt to our uniqueness.