The new executive director is a maritime man with a plan. 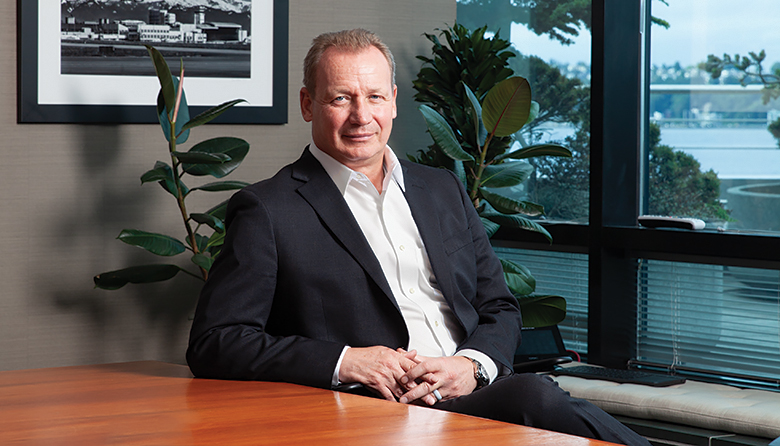 As a former Rear Admiral and CFO with the United States Coast Guard, Stephen Metruck (sounds like metric) was an unconventional choice to head the Port of Seattle, but his deep experience in policy development and execution puts him in a strong position to take on the ports many challenges. Metruck joined the port last December after 34 years with the Coast Guard.

YOUTH: I grew up in northern New York in a small industrial town on the St. Lawrence River called Massena. My father worked at a hydroelectric plant that produced power for two aluminum plants and a General Motors auto-parts plant. Those were good union jobs that put a lot of my classmates through college. Trade and other things have impacted the town since, but it was a great place to grow up.

NAVIGATION: I used to see large ships come through the St. Lawrence Seaway, heading into the Great Lakes through the locks. That got me interested in the maritime, and I entered the U.S. Coast Guard Academy, where I studied ocean engineering. On graduation, I went to sea as an engineer on board a ship doing counter-drug operations on the border in south Texas. Back then, it was big bales of marijuana on fishing vessels.

9/11: I then shifted to shore-based operations, working in Tampa, Buffalo and San Diego doing maritime safety and security operations and environmental protection. I was the captain of the port in San Diego when 9/11 happened. We worked with the Navy, as well as local, regional, state and federal law enforcement, to put regimes in place to protect the public and industry. We built the first joint harbor operations center, which integrated a lot of different sensor systems and stakeholders into a kind of one-stop shop for waterfront safety and security.

SECURITY: We had to look for risk to both passengers and cargo. We worried a ship might be used as a weapon to collide into an aircraft carrier or a bridge and developed the Sea Marshal Program to have armed boarding teams accompany the harbor pilots that guide ships in and out of the ports. When we realized there was no radar surveilling the sea traffic approaching San Diego, we brought in a military radar to look at possible threats. When I became commander of Sector Puget Sound for the Coast Guard, we did further integration here to create the Puget Sound Joint Harbor Operations Center.

POLICY: I got a masters in public administration at Harvard University because I wanted to get into the development of policy. I was a Coast Guard congressional affairs fellow on Senator John Kerrys staff for a couple of years, working on the reauthorization of the Magnuson Act, which manages fisheries. It was like a crash course on how public policy is made. That helped me when I became admiral and CFO in charge of the Coast Guards $10 billion budget.

THE PORT AS GATEWAY: How do people, goods and ideas come through Washington state? If you dont have an effective port, it doesnt happen. The port is the economic engine for the region and for Washington state. On average, 1,000 people a day from Microsoft travel through Sea-Tac Airport. The multibillion-dollar North Pacific fishing fleet is all based out of Fishermens Terminal. We provide the facilities for a cruise business thats gone from nothing to a million passengers a year.

SEAPORT: When improvements are completed on Terminal 5 to prepare it to handle the new generation of super-large container ships [carrying the equivalent of 18,000 20-foot containers], it will have the best cargo terminal layout in the Northwest. It will have more direct access to rail. Thats important when you are handling so many containers. Pilots like it; tugs like it. It will open up other [waterfront] assets that could be used for the transportation needs for King County, like ferry systems, space for larger fish processors and new capacity for cruise ships.

MARITIME INDUSTRY: Maritime jobs provide good wages that average $72,000 a year. We are also looking at establishing an innovation district at Fishermens Terminal and/or the uplands near Pier 91. Maybe a private-public collaboration to create an incubator to find better ways to solve problems in such maritime-related sectors as seafood, services for unmanned water vehicles, fishing vessel repairs, lifesaving equipment, onboard electronics and firefighting systems. All those industries are multipliers in the global economy.

SEA-TAC AIRPORT: Seventy-five percent of our revenues come from the airport, and all that revenue goes back to the airport. The airport was built for 1,200 passengers an hour and is now handling 1,900 passengers an hour. The $3.2 billion in investments we are now making is just playing catch-up. This summer, we engaged the public in our sustainable aviation master plan that will take us out 10 years. Then, the whole region needs to look at a regional approach [to the possibility of additional major airports].

SAFETY: Nothing is more important than making sure everyone goes home safely to friends and family. In my career, Ive had more than seven individuals under my command killed in training and operations. They were all traced to inattention and human error. We recently did a whole week of safety meetings to show this is important to us.

DISASTER PREPAREDNESS: If a catastrophic seismic event happens, I believe the waterfront and the maritime industries will play a key role and we have to make sure we are prepared. Its the unthinkable, but we have to think about it. We will need to get the airport operating and coordinate with other first responders to restore operations and gateways.