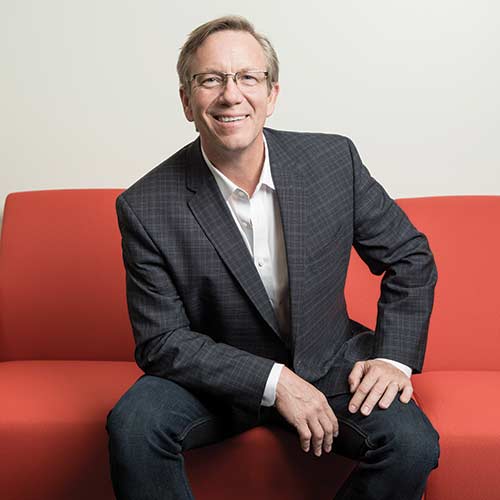 An engineer, a fan of Roman history and an entrepreneur, Michael Schutzler is intent on making the WTIA a vital force in the regions tech sector.

Family: My father was a geographer from Lithuania. He escaped to East Berlin, then over the wall to West Berlin. He worked for West Germanys mapping division, where he met my mother, also a geographer. They moved to the United States, where Dad became a cofounder of MapQuest. They raised me with all the values of Immigrant Guilt 101: I risked everything to come to this country, so you will risk everything to make my name a better thing. High work ethic. Intense on objectives. Im a softer version of my dad.

Occupation: I got my degree in electrical engineering and went to work as a systems engineer for Harris Corporation, which made most of the worlds satellite earth stations. I grew up bilingual because Mom spoke to me only in German. While traveling to the Middle East on business, I also learned Arabic. After getting my MBA at night school, I went to work for Oracle in sales. Dad said if you want to run a company, you have to learn to sell. There was this dark night of the soul. I had never sold anything before. Sales are just rejection on top of rejection. It started out very painful, but then I got numb to it.

LiveMocha: Ive always had a passion for education. Ive taught everything from how to play a flute to Zen meditation to finance. Being CEO of LiveMocha [from 2010 to 2013] was the most psychologically satisfying job I ever had. Our software improved English language acquisition [by immigrants] by about 50 percent. But it was a crappy business selling to educational institutions that are risk averse and face declining budgets. I sold LiveMocha to Rosetta Stone in 2013.

WTIA: I was supposed to take a year off to go on a motorcycle trip, but after three months, the WTIA board asked for my help in finding an executive director and I fell in love with the gig.

Mission: The aerospace industry makes airplanes, but you cant describe the IT industry in terms of output. Its more like a talent cluster that includes companies like Starbucks. Our dilemma is that we create jobs 10 times faster than the rate at which we create talent to fill them.

Talent: There are perpetually 25,000 unfilled tech jobs. Weve been good at recruiting talent from elsewhere, but thats getting more difficult as we compete not just with Boston, but also Shanghai and London. We need to collaborate with government and schools to make this a compelling place with good schools and a transportation infrastructure. We have to educate government about what is attractive about this tech industry so theyll help us.

K-12: We need to introduce computer science in school, beginning with kindergarten and continuing through college. Its important because computer science is a tool that is essential to almost every endeavor, from life sciences to energy research. We need to offer not just programming, but also algorithmic problem solving. Its an order of magnitude easier than algebra. And its already being done in the United Kingdom and some provinces in China. The first step is to train teachers. We also need to boost funding for higher education. The entire university output of computer science graduates from all schools last year was 500. We needed another 3,000.

Apprenticeship: We also need a program for people who have the capacity to do IT work but cant get the training. Weve received $3.5 million [in federal funds] as seed money to develop a new apprenticeship program. We will screen women, disadvantaged minorities and vets who have the math aptitude but just havent learned how to write in Java. They will be trained for three to four months using industry-recognized certification programs from companies like Cisco, Salesforce.com and Microsoft. The students will then be placed in a paid, 12-month apprenticeship. Once you graduate, theres a strong likelihood the company will keep you on the payroll at a full salary.

Going Forward: The goal is to train 150 students a year for four years. By the time we are done, we hope we will have a mechanism in place that can be self-sustaining with private funding. Microsoft, F5 Networks, Impinj and Accenture have already agreed to support us. Tech companies realize that its [cheaper] to pay for someones training than to spend $50,000 to $80,000 to relocate someone. We arent going to train high-level system architects, but application software developers. There are about 3,500 of those jobs. We will also train people to work on server farms or as business analysts.

Influence: Tech is taken for granted by government because weve had this desire for please dont touch me. The inverse of that is government pays more attention to the teachers and teamsters unions who show up at the state capitol in blue or yellow T-shirts. We need leaders to show what we need to do. The people [in tech] are no less politically passionate; they just havent been rallied.

Taxes: For two decades, the tech industry has had the mantra of no new taxes. But for the last two years, that has not been the case. We understand we have a broken tax system [in Washington]. We have a highly regressive B&O structure which crimps down on startups, which is crazy. We have one of the lowest tax rates in the country. We can do the math. But if we are going to increase taxes, the lions share should go to education and transportation. A capital gains tax may be reasonable thing to look at. Rebuilding B&O is a better aproach. We dont have to start from scratch. We can look at states like Texas that have already been through this.