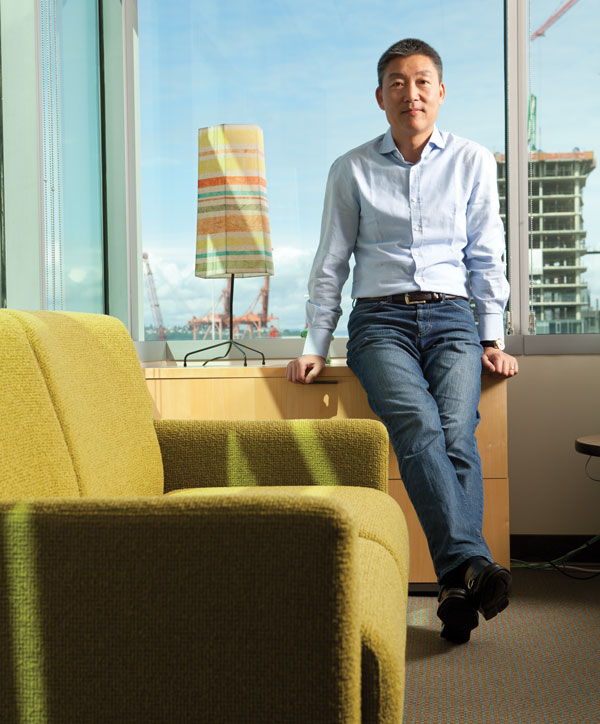 Born in China and educated at some of that nations top universities, Joe Wang has become adept at managing the American way. He has turned around several companies, including WatchGuard, a provider of internet security solutions and network security appliances, which he has transformed since taking over as CEO six years ago.

EARLY DAYS: I grew up in the center of Beijing. My parents were both university professors my father of Chinese literature and my mother of drama. I studied very hard to get into the best junior high school, the best high school and the best universities. It was extremely competitive. I wanted to study liberal arts, to be a writer, but my father said, No, go into science, so I became a computer science major.

COMING TO AMERICA: Sixty to 70 percent of my class of 1984the more ambitious students went to Europe or the United States, but not many were successful. China grew so fast that the people who stayed behind ended up doing better. I was inspired by a book about Silicon Valley written by a professor at the University of Southern California, so I went to USC to study management. I knew I wanted to run a business.

CAREER: My first job out of school was as a product manager. I thought it would be good experience to be able to look at a product holistically, including determining what should be its core function, what features to include, how to price it and how to market it. I did that for three years, then I met someone at a party and we decided to start a company called Nimbus Software. It was a good product, but we ran out of money.

20/20 SOFTWARE: When I started 20/20 Software, I didnt want to depend on anybody else. I bootstrapped the company using savings, loans and credit cards. I worked 80-hour weeks. It was the most difficult thing I ever did but it is what I am most proud of. At first, we had a data imaging product, but later, we got into the software distribution business. I sold the company to Symantec in 1999.

LANDESK: While at 20/20, I got to know an Intel software product called LANDesk that allowed for the remote management of desktops. When Intel decided to sell it, I knew it was a good business, so I teamed up with a private equity company, put in some of my own money and bought it. It was such a small business in Intel that it didnt get much attention. I built up the sales and marketing team while slowly hiring more engineers and changing the product. We started growing by 30 percent a year.

WATCHGUARD: When we sold the company, my equity partners got a 1,000 percent return on their investment. They asked me to take over WatchGuard, a company that developed firewalls in the dot-com boom when those products were hot. When I took over six years ago, the technology was obsolete and we spent the first two to three years rewriting the product from scratch. It was worth it because the company had a good brand. We outsourced the testing work to China, where we now have 50 to 60 people, but most of our engineers are still here in Seattle.

SECURITY: The product is now what we call an integrated security appliance. Its a red box that you put between the internet and your internal network that acts not just as a firewall, but also offers protection against viruses and spam, intrusion prevention and app control. Most companies will buy specialized software for each function and put it together themselves. We put it all in one box. Our solution is especially good for small and medium enterprises, although we are now moving into the higher end. No company can be the best in every area, so we designed our product so we could use software from the top providers in each area. If one partners technology falls behind, we switch it out with another technology. Everyone wants to partner with uswe give them a royalty. Our focus is on the platform and on the management interface.

REVENUES: Our annual revenues are over $100 million, up from $70 million in 2006. We are number one in the small-business market of 50 to 500 employees and we are growing fast in the higherend market of companies with 500 to 5,000 employees. Last year, we grew by 50 percent in China and 38 percent in Europe, the Middle East and Africa. We are hiring a lot of people in engineering, customer support, marketing and sales. We also have offices in Orange County and Toronto, but our preference is to grow here. Its easier to train someone here where you have the rest of the team.

CULTURE: Its extremely important. I like running a midsized company because its more entrepreneurial. You can be flexible and move quickly. You feel more like a family. When I started at the company it felt old in tech terms. People were more concerned about being compliant. It was the opposite of entrepreneurial. We had to change that. You need to communicate, educate and make changes. Sometimes that means finding people who have the same philosophy as you, people who want to be a winner instead of risk averse.

SECURITY THREATS: Products like ours give you the technology you need, but you still need to have good policies to be safe. Today, for example, there are a lot of threats from social networking sites. If you really want to be safe, you may want to say no to Facebook or no to games on Facebook. It depends on how important those sites are to your company. The mobile devices people bring into the workplace are another potential problem that you have to address. Our technology allows you to apply the same security policy to wireless devices as the rest of the system.