The president and CEO of MacDonald-Miller Facility Solutions likes adventure. His background in selling (and sailing) has helped him steer a confident course. 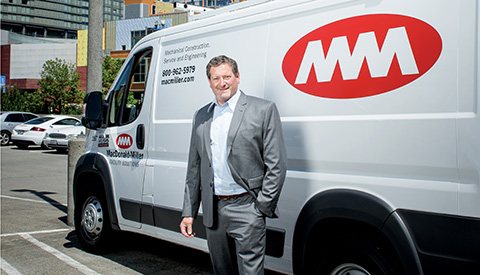 Gus Simonds and his management team took the helm at MacDonald-Miller in 2006. The Great Recession hit two years later. By focusing on services and increasingly complex projects, the mechanical contractor survived, then thrived, doubling business since 2012.

The company now has 1,000 employees and boasts $260 million in annual revenue.

EARLY YEARS: I grew up in the western suburbs of Chicago. My father worked as an insurance executive. Hes a natural leader and taught me to sail. Mom was an award-winning botanical artist. She grew up in Chelan, and visiting Washington state got me hooked on the adventure the wilderness offers. I often went bird watching with Mom. I was a bit of a science nerd and would devour nature books and field guides and collect small creatures as pets.

EDUCATION: Lured by the West, I went to Washington State University to study environmental science. I drove my 1971 Oldsmobile Cutlass back and forth from Pullman to Chicago many times. The WSU experience taught me self-reliance and the power of perseverance. I was 2,000 miles from home, and there was no electronic banking or texting. When your car broke, you fixed it.

CAREER: After college, I tried finding a job in hazardous-waste management sexy stuff! but ended up with a sales job at Honeywell selling building mechanical systems, service and retrofits. Other people hated cold calling; I thought it was fun. You get paid to make friends sweet!

MACDONALD-MILLER: Five years later, in 1989, I wanted to get back to the Northwest and took the first job I could get in Seattle doing service and special projects sales at MacDonald-Miller. I hadnt planned to stay, but once I started at the company, I could tell MacDonald-Miller was a special place with great opportunities.

THE BUSINESS: We make buildings work better by designing and installing or retrofitting HVAC systems [for heating and cooling], plumbing systems and control systems so that buildings can keep operating at peak performance. We are also doing a lot more building efficiency analysis to help owners evaluate the cost and benefit of improving their systems to save on energy bills while also increasing tenant comfort.

CHANGE: When the recession hit, for five years it was the school of hard knocks. With a diverse range of clientele, we began focusing on services. Since 2012, we have grown by about 20 percent a year. This year, with more than 1,000 employees, we will be twice the size we were in 2012.

CULTURE: Our company culture is our internal brand its what makes you want to come to work at MacDonald-Miller. You look for ways to put a smile on the faces of your customers and colleagues. We have 40 shareholders who all work at the company and are required to sell their stock if they leave. We preach silo busting and collaboration daily. The goal is having long-term employees who can see how what they do can make a difference to the company and to our customers.

TECHNOLOGY: There are huge IT opportunities like finding new uses for 3D modeling and better managing our mobile workforce of several hundred. Putting new systems in place is a challenge, so we hired a CIO last year to take that on. We now see IT not as a cost but as a way to provide a competitive advantage.

FUTURE: We are now in the early stages of involvement in two of the largest projects Seattle has seen in its history the expansion of the Washington State Convention Center and the transformation of Swedish Medical Center First Hill. Both projects will be completed in the next four years. Our strengthened big project reputation hopefully will help us win other signature projects. We are also putting a renewed emphasis on energy efficiency and building performance. That work has taken us to other regions, like Canada and the Caribbean. I think we could do well in San Francisco.

COMPETITION: I have great respect for McKinstry and some of my other competitors. We all run on thin margins, especially compared to the risks we take around the accountability of system design, long-term performance and cost. In some projects, we may have 10,000 water-pipe connections. Its a big problem if there is even one leak. One thing McDonald-Miller has become known for doing right is having teams from across all trades that can execute on the most complex systems. It goes back to culture and attracting and keeping the best talent.

MANAGEMENT: My worst mistakes came from thinking that people could evolve into a new role because I wanted them to rather than really testing their ability and vision first. Those mistakes are always messy for both parties. My proudest achievement was staying financially healthy through a very long recession. We learned a lot and became a better company through that experience.

EXECUTIVE Q+A RESPONSES HAVE BEEN EDITED AND CONDENSED.

TAKE 5: Get to Know Gus Simonds
1. GO-TO GETAWAY: The Lake Chelan area. Its my launch pad for adventure. Nothing beats a glass of wine at a winery while you plan your next adventure.

2. FAVORITE BOOK: Lake Chelan: The Greatest Lake In The World by John Fahey.

3. MOST ADMIRED PERSON: Richard Branson. He puts his culture and employees up front as part of his brand. He bucks tradition. Hes an adventurer. He sucks the marrow out of life!

5. CURRENT WHEELS: A Chevy Volt, a Toyota pickup and a 1973 455 big block Hurst/Olds. Ive had an Oldsmobile since high school, including several Cutlass 442s, and its a bit of my personal brand now. Theres no substitute for cubic inches.