"The best outcomes happen when you support employees to empower their best ideas." 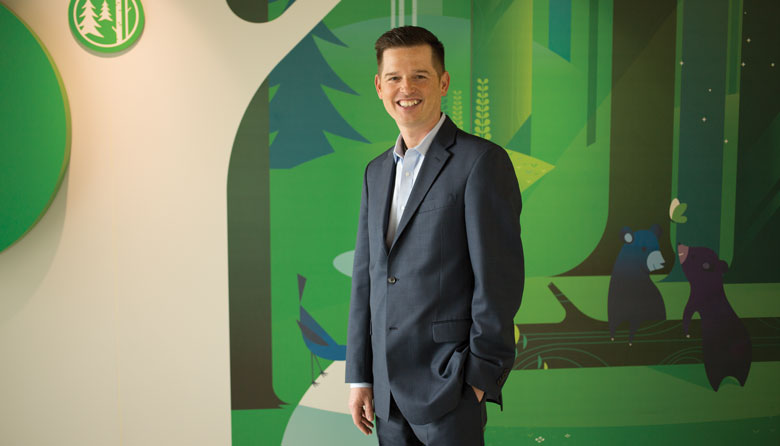 Seattle Childrens Hospital, which has 7,530 employees and is ranked fifth in the nation in quality, has seen its clinical and research efforts expand rapidly in recent years. Building Hope, its eight-story, $305 million hospital expansion in Laurelhurst, was completed in 2013, and Building Cure, a 13-story, $300 million downtown research facility, is set to open next year. Jeff Sperring, M.D., who became CEO three years ago, is intent on better integrating these clinical and research efforts to speed the development of cures for children.

ADAPTATION: I was born in Rochester, New York, where my dad was a home builder and my mom was an accountant at Xerox. My grandfather spent his entire career at Kodak only to watch it go away. Kodak was so focused on film, they forgot their real mission was capturing memories.

The lesson for Seattle Childrens is that its not about us being a hospital for kids. Its about doing things that help kids live healthier and more fulfilling lives.

CAREER: I decided to be a doctor when I was in the sixth grade. I was into math and science, but I wanted to help people. The first time I did a rotation in pediatrics in medical school [at Vanderbilt], I knew thats what I wanted to do. If you can help cure a kid, you will have 50 to 70 years of impact. I loved the challenge and hope of that.

RESIDENCY: I spent six years as a medical corps officer in the Navy, moving every two years. I did a residency at the childrens hospital in San Diego surrounded by specialists, and then in the Mojave Desert, where I was one of just three pediatricians taking care of 4,000 kids. Right out of residency, I was asked to head the department of pediatrics. Later, I was asked to be the chief medical officer, then CEO, at the childrens hospital in Indianapolis. I love working as an administrator because I can have a much broader impact.

COLLABORATION: Leaders from the research and clinical teams now plan together. Its not just about getting grants; its about focusing resources on areas where we have the best clinical service and best research.

RESEARCH: A key focus is on pediatric immunotherapy, where we are committed to being the global leader. Historically, it would take 20 years before research is turned into a therapy. With immunotherapy, were going from an idea to Phase I trials within a couple of years. We started thinking about how we could bring more kids in to accelerate those trials and get the cure to the kids faster. That helps [promote] the next therapy because with each trial, we learn more about how each child responds.

MARKETING: We did a national marketing campaign in The Wall Street Journal, The New York Times and at airports in Dallas, Atlanta and Chicago around the clinical trials in Seattle because, as weve done this planning, weve opened up additional capacity and we can bring more kids to Seattle to [advance] these trials. With cancer trials, the familys option is to go into the trials or go into hospice. [In Phase 1 leukemia trials], 93 percent of them went into remission. Although half of them relapsed, thats still extraordinary. I firmly believe we are within a few years of a cure.

PARTNERSHIPS: If we do find a cure for pediatric leukemia, we would never be able to care for every child in Seattle, so our goal is to do the manufacturing and work with partners across the country to deliver that therapy. We are working with childrens hospitals in Los Angeles and elsewhere so that a child diagnosed with leukemia can participate in our trials but be treated at the local hospital. [Some of the childs blood is sent to Seattle, where immune cells are isolated and genetically edited to make them produce cells that target cancer. The blood is then reinjected in the child for treatment at the local hospital so families can stay closer to home. Building Cure, a new research facility that will be completed in Seattle next year, will have an entire floor dedicated to producing such therapies.]

COST: We are doing our best to take ideas and manufacture therapies as efficiently as possible because it may never be possible to produce therapies for rare diseases commercially, and the only way for the kids to get treatment may be through clinical trials. PRIVATE SECTOR: Our goal is to find industry partners who can develop our technology more broadly so that we can reinvest [the money we make from those ventures] into the next cure for kids. When Juno Therapeutics was launched, our rules prohibited us from taking an equity position in a private company. But they are licensing our technology, so if they are successful, we will receive substantial royalties.

EQUITY: Now weve changed the rules so we can take equity positions. If we have a research idea and transfer it to a biotech company in exchange for an equity position, the company can save money advancing the technology while we can work with them to accelerate the therapy trials. We are working with [Boston-based] Casebia Therapeutics, for example, on ways to alter T-cells to modulate the bodys immune responses in ways that treat and prevent autoimmune conditions.

FOCUS: We are also focused on brain research and are looking closely at causes and treatments for things like epilepsy, autism, cerebral palsy and brain tumors. We recently discovered a new pathway involved in epilepsy and found a drug developed for cancer that targets that pathway.

PHILANTHROPY: In November, we launched a $1 billion campaign, the largest campaign in the country. Its about advancing our research and our ability to care for every kid in our region, regardless of the familys ability to pay.

GOALS: We want to be known as the place that brought more kids to cures than anyplace else.