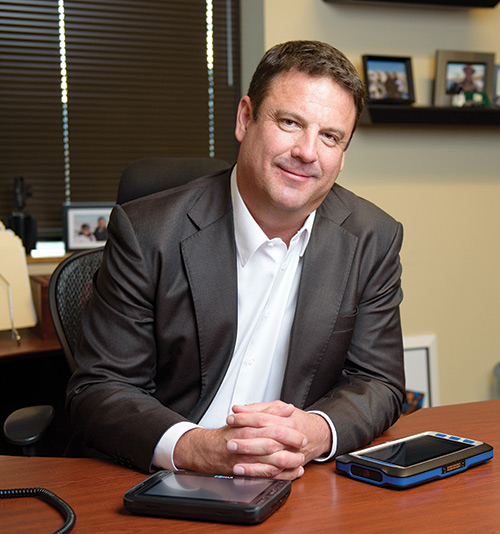 Brett Brinton studied premed in college, did coursework at Harvard and even cofounded his own company, but his prospects looked grim in 1989 after he turned 26. Thats when B & B Software Engineering, the Southern California business he founded with his brother, William, exploded quite literally. Authorities going through the wreckage learned the two brothers had been operating a full-scale meth lab, and both brothers spent time in jail. Today, Brinton is cofounder and CEO of Zonar Systems Inc., a Tukwila company that provides technology products and services to commercial truck fleets and recently received a $50 million investment as part of a strategic partnership with Daimler Trucks North America, the domestic unit of the worlds largest commercial vehicle manufacturer.

THE METH LAB: This was not Breaking Bad. I had all the advantages and great parents. I was just a dumb kid. I got caught and paid the price. It was a youthful indiscretion. Im not proud. Ive moved forward every day since then. Ironically, the experience has helped me in the business because its made me humble. Its driven me to improve and succeed and give back.

CAREER: [After the explosion,] I joined Wasser, a Seattle company my father founded that sold a new line of resin-based industrial coatings used to fight corrosion on everything from pipelines to the Space Needle and Jay Lenos cars. We became the largest supplier of bridge coatings in the world. I stayed at the company until it was sold in 1999, handling everything from strategy to sales and marketing. I learned business basics, including things like credit and customer service. Every successful person has a mentor, and mine was my father. I owe him much. In a high-growth, disruptive business, there are early adopters and others who wait. Some entrepreneurs give up too quickly. My experience with Wasser gave me the fortitude and confidence to keep pushing forward.

ZONAR SYSTEMS: In 2001, my brother and I came across an idea for a device to make it easier for truckers to do the truck inspections federally required before and after each trip. Every year, hundreds of people are killed by road gators tire treads that would come off and sometimes hit other vehicles windshields. Generally, a truck can run on a flat tire for two weeks. A proper inspection during that time would avoid those deaths. But a lot of truckers would never do a proper inspection and instead would just fill out the paperwork a week later in a coffee shop. We designed a device that was not only waterproof and included a light so you could do the inspection in the rain at night, but also required the driver to be physically at a particular zone of the truck [thus Zonar] before questions popped up on the device that had to be answered for the inspection. Theres been a big increase in compliance and safety. A lot of lives have been saved.

VIRTUAL TECHNICIAN: In 2005, we added a dedicated black box that taps into the vehicles network to collect about 100 data streams, including things like air pressure, coolant level, engine temperature, location and mileage. We also added a cellular connection and a GPS chip and worked with Daimler to develop a virtual technician. The concept came from the airline industry, where if there is a fault and you add contextual data, you know what is wrong and how to repair it. Now, if there is a problem on the truck, a fault code goes off. The system takes a snapshot of the data right before and after the fault occurred. That information is sent to the folks at Daimler, who can tell with close to 100 percent accuracy what is wrong and how to fix it. A lot of the time, the driver can fix the problem or the issue can wait. But if a maintenance issue arises that requires immediate attention, because of the GPS, the trucker could be automatically guided to the closest warranty center that has parts. Downtime is greatly reduced. Adding the GPS chip made us a leader in track-and-trace features that allow companies to better manage their truck fleets.

MOBILE: In 2012, we designed a purpose-built tablet that you can use to take pictures at an accident or Skype with a mechanic. Its also a platform for applications, but its controlled so the driver cant use it to play Angry Birds. We are driving a standard with Daimler where half the trucks in North America will have our platform. The tablet comes with a starter kit of apps, but others can develop for it. We want to be the Microsoft of [commercial] vehicles.

GROWTH: Weve been growing by more than 30 percent a year and expect to break $100 million [in sales] this year and $300 million in five years. We will have well over 300 employees this year. We established a downtown Seattle office to better attract technology workers. Weve moved 70 people there and will recruit another 40 to 50.

FUTURE: We have 150 terabytes of data coming in every day from 30 million sources on 500,000 vehicles. We want to do more analytics on that data. Already, were helping truck companies save up to $1,000 a month per truck on fuel by encouraging drivers to be more fuel efficient. We can tell, for example, if drivers are switching gears at the right time. Millennials dont want to drive trucks, but if you bring technology into the truck to gamify the process, you can pay for performance instead of by the mile. You can pay more to drivers who operate vehicles more safely and efficiently.

COMPANY CULTURE: We hire for character and train for skills. Employees are encouraged to innovate. A successful business is a series of bets that build on each other. If you make a mistake, you correct. Just dont do it again. We love diversity. My grandfather was a full-blooded Potawatomi Indian. Jim Thorpe [who won Olympic gold medals for pentathlon and decathlon in 1912] was my third cousin. We want to make an environment here of young and old and every color under the sun. The only criterion is that you want to be here.