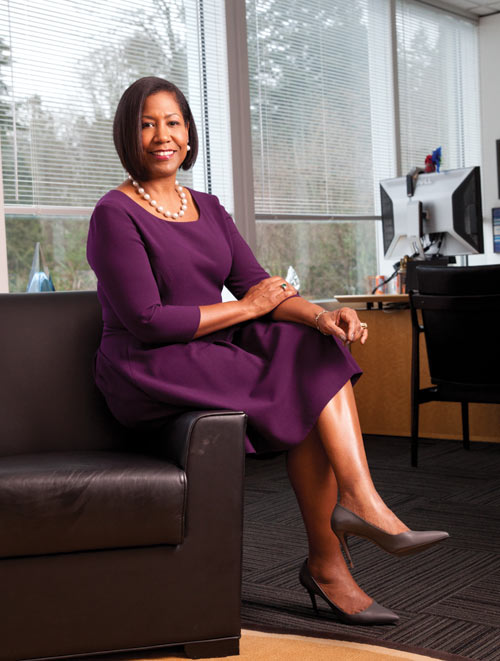 In January, Adriane Brown celebrated the fifth anniversary of her joining Intellectual Ventures as president and COO. Brown seemed an unconventional choice to run a 600-employee nonmanufacturing firm that has acquired 70,000 patents and monetized 40,000 of them. But, as one who has always been comfortable with change, she embraced the vision of IV cofounder and CEO, Nathan Myhrvold, and has made it her own.

EARLY YEARS: I grew up just outside Richmond, Virginia. My mom used to drive a school bus and my dad was a high school teacher. My mother went back to school and became a teachers aide. As I was going into third grade, it was up to families to choose the school they would be going to in the mandatory [desegregation] year, which was the following year. So, in 1966, my parents and one neighbor down the street decided they were going to send their five black children to what had been the traditionally all-white school. I think perhaps that set the tone for me in my life that you do things that arent always comfortable.

COLLEGE: My dad said, You can go anywhere you want to go in the state of Virginia. I picked Old Dominion University. I majored in environmental health, not knowing exactly how I would use it but knowing it would be increasingly important.

CORE VALUES: My mother and I had a conversation recently. She told me, Your cousin says you are the same Adriane that you were as a kid. You did not let career success change who you are. That sense of humbleness and the golden rule treat people how you want to be treated was a big thing [when I was growing up]. Dignity and respect for everyone. That has been my mantra from the first day I walked into a manufacturing facility as a shift supervisor. When you can instill that in an organization, people become more endeared to the mission; they become connected to you as a leader.

CAREER BEFORE IV: After graduation [in 1980], I became a shift supervisor at the Corning Electronics manufacturing plant in Raleigh, North Carolina. We made capacitors for the electronics industry. I spent 19 years at Corning in management roles. From 1990 to 91, I joined the Sloan Fellows program at MIT [and earned a masters degree in management]. I eventually became VP and general manager of Cornings environmental products division so theres a connection back to my environmental health degree. [In 1999,] I joined Allied Signal, which was acquiring Honeywell [and retained the Honeywell name]. I eventually became president and CEO of Honeywells automotive business, a $4.2 billion business with approximately 12,000 employees around the world and 40-plus manufacturing plants.

ELEVATOR PITCH: I say that Intellectual Ventures is a company unlike any other. We have the privilege of investors [like Amazon, Apple and Microsoft] who believe invention is important. By using their capital we are able to invent in house, we help companies invent, and we are able to step back and think about technologies that are going to be important in the world.

LEADERSHIP STYLE: Im a collaborator, and I think thats important in a company with the intellectual scope our company has. Youre going to have lots of opinions, but its about collaborating and moving forward.

HOW OTHERS MAY PERCEIVE HER: Accessible. Straightforward. And perhaps the heart and soul of the business.

MANAGEMENT STRUCTURE: I report to the CEO [Nathan Myhrvold]. One of the things I did early on was to establish our founders board meetings. Through the founders board, we approve our annual goals. My job is to make sure those goals are reasonable, appropriate for the circumstances, and that were challenging ourselves beyond what is easy and perhaps comfortable to do.

CRITICISM: The [patent troll] argument is that were a nonpracticing entity because IV chooses not to actually manufacture a product. But you could look at many high tech companies that design products and dont manufacture. I think a classification being the rationale to categorize us is just wrong. It doesnt make sense. We should focus on the fact that in any system there are people who are practicing peoples patents and are not paying for those rights. There are people who are sending out demand letters and frivolously trying to trick companies into paying settlements. That is not what we are doing here. We spend a lot of time looking at technologies, finding patents and trying to bring real value to our customers. I believe that time will prove that we are on the right side of this.

MAIN CONCERNS: Are we effective? Do we bring good value to our customers? Have we been an economic provider for our community? Have we created jobs? Do we have products that have come from those things we have bet on? Those are the things I really care about. I think you earn your reputation over time and I dont believe in some of the characterizations of our company because I know what we do regardless of what they say. And I think over time the truth comes out.

SPINOFFS: When we spin out companies [like Kymeta and Terra Power], they have any number of relationships [with us]. We may have someone who serves on their board. We may have a service agreement to help them out in their early days. For instance, they may not have the caliber of human resources talent that we have in the [parent] company, so we may do some services for them to help them get going. Once theyre out, its their choice. If you need services, then well have a service agreement. It is up to that leadership team and that board to lead that company accordingly. But were still proud of all of our children.

THE BRAND: When I think about our brand, I think about the powerful impact that intellectual property has, how it is sometimes an underutilized resource and asset for companies, and were the people who can turn that around for them.

PATENT REFORM: The fact that patent reform is still open creates uncertainty, and I think that has had an impact on how customers want to consider relationships with us. I can appreciate that as a business leader. However, were going to work through the fact that in any vibrant ecosystem of business, youre going to have people who dont understand it, people who feel its disruptive and who may fight against it. Were going to stay on plan. Were here for the long game. We continue to believe that technology is going to continue to be important, that companies today benefit from a variety of impulses that help them. To [those who] suggest that investing in technology and investing in licenses is not worthy, I disagree. I think over time that our business model will prove itself.