From Eggs to I Do 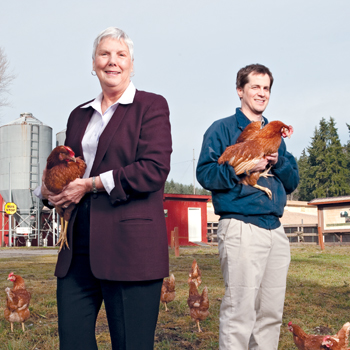 When Judson Wilcox traded his Seattle home for a farm in rural
Roy, Wash., in 1909, he couldn’t have imagined the site would one day be used
to host weddings and events. Neither could he have conceived of the concept
of-or value in-organic farming practices, in this case the consumer’s cravings
for organic eggs.

Raised on a farm near Toronto, Wilcox traveled to the
Pacific Northwest and Alaska to try his hand at gold panning, a prospect that
dulled quickly. When he failed to strike it rich in precious metals, the
farmboy-turned-prospector turned his attention to hats, opening a haberdashery
in Seattle’s Pioneer Square. But still, the lure of the farm remained. So
Wilcox found a farm that would allow him to work in trade for room and board.
After his first week on the job, Wilcox-without his wife’s knowledge-traded it
all away: his home in Capitol Hill for the farm in Roy.

Worse barters have been made. Today, the 240-acre property
he picked up-not so much farm at the time as it was timber-covered land and
swamp-sprawls across 1,800 acres and is home not only to numerous henhouses but
also to a farm machinery and car museum, a church and, soon, a small event
center, says Linda Thomas, CEO of Wilcox Family Farms.

At first, the Wilcoxes were subsistence farmers. But after
about a decade, both Judson Wilcox and his wife, Elizabeth, enrolled in poultry
raising courses through Washington State University Extension in Puyallup. They
attended sessions at alternating times so they could continue to run the farm,
and went into the commercial poultry business. From inauspicious
beginnings-half of the couple’s 1,000-bird flock died the first night-came an
empire: the Wilcox Family Farms brand.

The business has since remained in the family. In 1931, son
Truman joined the operation and the farm began making a profit. Nine years later,
the chicken flock had grown to 5,000, a few head of cattle were added to the
operation, and income for the farm reached about $20,000.

In 1961, the farm entered the dairy business as well, and by
1969, by which time the third generation of Wilcoxes had joined the company,
the farm was processing and packaging its own eggs, opening a milk processing
plant four years later.

Yet, while the farm was large and diversified, not all was
well. With milk prices falling and costs rising, the Wilcox dairy business
began to sour. In March 2008, it became clear that while milk formed the
largest part of company revenues – about 70 percent – it nonetheless wasn’t
making enough money. The clan decided to sell the dairy business.

The business went to the chickens, in earnest. Jim and
Barrie Wilcox, the third generation, pulled in the farm’s growth to focus on
becoming a good local egg producer for the Oregon, Washington, northern
California, Alaska and Montana markets. The farm now boasts 1,600 organic acres
in Roy and several hundred other acres-not all organic-in Aurora, Ore.
Meanwhile, the birds are going cage free. As in the early years of the farm,
little red chicken houses are beginning to dot the farm landscape yet again.

Also in 2008, Jim and Barrie Wilcox decided to take a less
active role in the business. They decided the four fourth-generation boys
weren’t ready to take over the family business entirely. So, they brought in
Thomas-a consultant who had been doing succession planning with Wilcox Family
Farms for 15 years-to serve as the interim CEO.

Thomas had to address some thorny issues left over from the
previous management. In August 2008, for example, Wilcox paid $260,000 to a
former employee to settle a federal sexual harassment and retaliation suit filed
by the Equal Employment Opportunity Commission. The suit alleged that a male
supervisor grabbed and tried to forcibly undress a Wilcox Farms employee at its
Aurora, Ore., facility. The company agreed to pay a settlement fee to the
employee while denying any wrongdoing. The case brought the company unwelcome
publicity while it was celebrating its 100-year anniversary.

Thomas insists its employees were not involved in any
wrongdoing. “We strive for an open-door policy and are committed to maintaining
a safe and comfortable work environment for our employees,” Thomas says. She is
focusing her efforts on training the next generation of businessmen. The
company is going forward with its mission of local, sustainable farming.

“We think people are going to want to buy food that is
produced or grown close to home,” says Thomas. In addition to selling its eggs
regionally, Wilcox produces chicken manure, sells it to eastern Washington
farmers who use it as corn fertilizer, then buys the corn back for chicken feed.

Fundamentally, Wilcox is sticking with the chicken business,
producing organic, cage-free and omega-3 eggs, though it also grows hay in
order to clear the land of the high phosphorous levels that came with cows.
Once the ground is clean, the farmers hope to start raising their own grain
crops or organic vegetables.

Meanwhile, the farm has started offering two-hour tours for
the general public, and has converted a fire hall into a meeting hall with
audiovisual and other technology suitable for company meetings and other
gatherings. The farm hopes to see the wedding business hatch later in 2010 as
well. The farm is home to its own small church, and also has an equipment
museum, which can be used as a reception space with a Mount Rainier backdrop.

In August 2009, the fourth generation’s Andrew Wilcox gave
the event space a test run and held his own wedding on the property. The family
has high hopes both for the future of the newlyweds and for its growing egg
business.