Board of Directors, Alaska Air Group 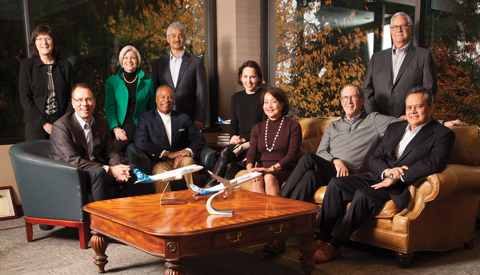 Governing a company is different from running one, notes Alaska Air Group board member Phyllis J. Campbell. An effective board asks the right questions, and one thats diverse makes that possibility more likely. Its sometimes messier, Campbell says of the gender and racial mix of Alaskas board. We dont always agree, by definition. Thats what diversity brings to the table. Innovation is linked to different points of view. The regional operator of Alaska Airlines, Horizon Air and Virgin America stands out for having five women on its 11-member board, with ethnicities in the varied markets it serves strongly represented. This special mix helped Alaska Air Group receive a top ISS QualityScore in governance from Institutional Shareholder Services. Achieving that score required looking harder for board candidates, Campbell notes. We all know who we know, she explains, but you have to really go in and work at finding maybe not the first people in your network. Reaching outside comfort zones helped Alaska recruit people like Eric Yeaman, a telecom CEO of Hawaiian ancestry, and Helvi Sandvik, a development company president who is Alaska Native. Also boosting the boards ISS score is a commitment to being at the forefront of progressive practices. Alaska was among the first companies to adopt term limits, easier proxy access and majority voting for uncontested elections. All board members other than the companys CEO are independent directors, elected annually. Prohibitions on employee hedging of company stock as well as robust guidelines and disclosure of director-owned shares and executive incentives contributed to the good score. Such practices are meant to reduce risk, but Campbell notes they also communicate an openness and transparency. Were always looking for ways to signal that were accessible, she says.