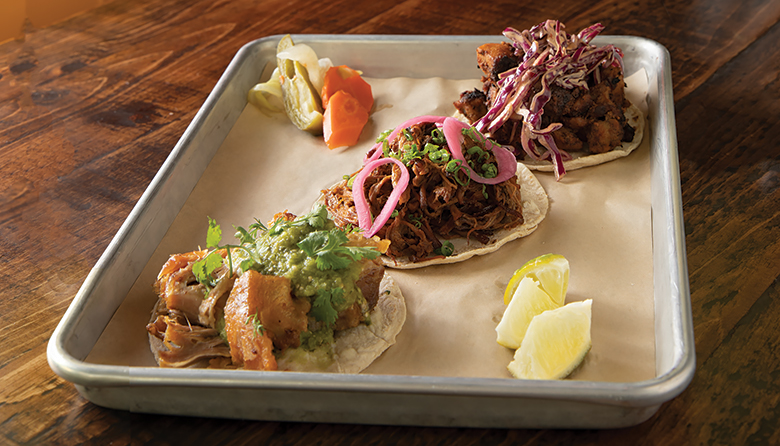 At Super Bueno taco offerings include, from left, jackfruit, brisket and chicken.

Saying Ethan Stowell is a busy man is a bit of understatement. Not only is he an award-winning chef and restaurateur, but hes also a philanthropist, an activist and the father of two young boys. In the span of a fortnight in May, he added two attractions to his ever-expanding protfolio: Super Bueno, a kid-friendly Mexican restaurant on a rapidly developing strip of Stone Way North in the same neighborhood as The Whale Wins, Joule and Manolin and Cortina, a fine-dining establishment downtown on the ground floor of Two Union Square with a decidedly different clientele and vibe.

Cortina is right in our wheelhouse, Stowell says by phone before jetting off to Nagoya, Japan, for a restaurant project he worked on at the airport there. Cortina fits the general profile of a Stowell establishment: a contemporary, 8,000-square-foot space in neutral tones with a crazy-long bar able to seat more people than many restaurants can accommodate in their dining rooms offering a menu of pastas ($19-$26) and pizzas ($17-$19).

Still, the Cortina menu reads swankier and more American than the likes of Stowells Tavolata and Rione XIII; it includes entrees such as a New York strip steak ($52) and fresh seafood towers ($95-$175). Basically, it suits the needs of the neighborhood, from happy hours drawing well-heeled business professionals to pre-theater fare on date nights.

Super Bueno is another story. Its a new thing for us, Stowell says of the colorful, casual spot half the size of Cortina, with a departure in cuisine style: a Mexican-inspired menu of kid-friendly quesadillas ($9) and platters of tacos packed with flavorful meat options (three for $14, five for $21 or 10 for $40).

The idea came from Stowells wife and business partner (and new CEO of FareStart), Angela Stowell. Super Bueno reminds us a lot of when we opened [the original] Ballard Pizza Company, he says. It was hard and infuriating and fun, and every day it got better and better.

Indeed, Super Bueno is reminiscent of Ballard Pizza Company, which has siblings in Frelard and South Lake Union, in the way its designed with both adults (good food and good drinks!) and kids (contained play space!) in mind. Stowell says its also built according to a scalable recipe, with the idea that if this Super Bueno goes well, Ethan Stowell Restaurants can use the same formula to create Super Buenos in other neighborhoods.

Some chefs build a collection of restaurants that all look strikingly similar and offer variations of the same dishes. Its refreshing to see a chef stretch in two very different directions.

A version of this story appears in the November issue of Seattle magazine.