Into the Woods: This Outsider Company Sees a Revival in Washington’s Lumber Industry 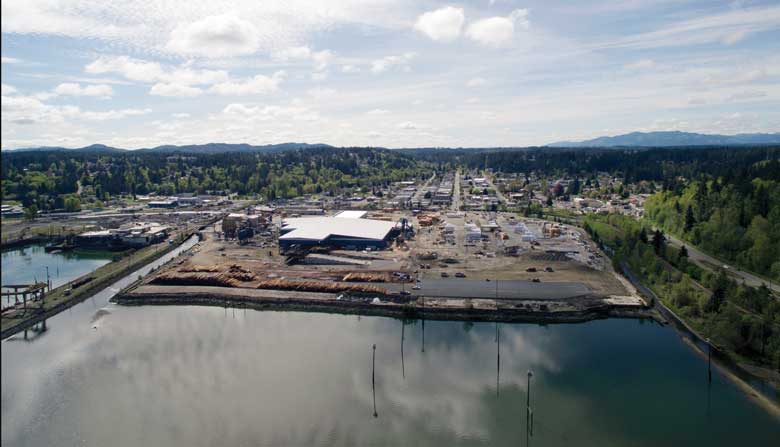 Washingtons lumber-producing sector, the states original heavy industry, is a shadow of what it once was. Decades of constricted log supply, competition from Canadian imports, the housing-led recession and aging facilities have taken their toll. In less than a decade, the number of mills in the state fell 29 percent, according to a Department of Natural Resources survey, and thats after the closing of mill complexes like Weyerhaeusers Snoqualmie and Enumclaw mills.

All of which makes what happened in Shelton earlier this year such a rarity. A new lumber mill opened.

In the overall count, the new mill at Shelton isnt a gain, since it replaced a mill, one of the oldest in the state, operated by Simpson Lumber, one of the oldest forest-products companies in Washington. Family-owned Simpson has largely unwound itself down to just a door factory in McCleary.

But the willingness of another multigenerational, family-owned forest-products company to spend more than $100 million to buy an existing facility, tear it down and build a new one from the ground up indicates that someone still sees value in slicing logs into two-by-fours, and doing it in Washington.

That willingness contrasts with companies like Canadian producer Interfor, which bought four Simpson mills, two in Washington, then decided to permanently close the one in Tacoma.

And its especially good news for Shelton, which grew up with the industry and which stood to lose not just one but two significant mills; an Oregon company bought a plywood-veneer mill with plans to close it and move equipment to a new plant in its home state. The newcomer is Sierra Pacific Industries, based in Anderson, California, near Redding, and a name people who knew the industry years ago might not recognize. Its not, as forest products companies go, especially old. It was cofounded in 1949 by Raleigh Humes Curly Emmerson and his son, Archie Aldis Red Emmerson, and didnt make it to Washington state until 2001.

But it has quietly moved onto the list of the largest lumber producers in the United States. In 2013, it was second in the nation behind Weyerhaeuser, but slipped to fourth in the 2016 rankings compiled by Vancouver, B.C.-based International Wood Markets Group.

It has done so by acquiring timberlands it now holds 300,000 acres in Washington and mills from other firms, and by building new mills itself. Two years ago, Sierra Pacific bought the last timberlands held by yet another legacy family-owned Washington company, Tacoma-based Murray Pacific, and it recently purchased 11,000 acres in Snohomish County. It bought an existing mill in Centralia in 2007 and has built new mills in Burlington and Aberdeen. STUD FACTORY: One of the first units of lumber produced at the new Shelton mill sits at the end of the planer. The sawmill accepts Douglas fir and hemlock and can produce 500 million board feet of two-by-fours, two-by-sixes and four-by-fours annually.

Sierra Pacific has been the exception to the rule of few new greenfield lumber mills being built in the United States, says Henry Spelter, partner with Forest Economic Analysis in Littleton, Massachusetts. There has been growth in production capacity in the South, but much of that has been expansion of existing mills. Weyerhaeuser added a lumber mill at its Longview complex as it closed its Green Mountain location in 2008.

Sierra Pacific actually had plans for a new mill at a different location the Frederickson industrial area in Pierce County when the Simpson Shelton opportunity came along. The Frederickson project has since been dropped. But thats not to say Sierra Pacific wouldnt be interested in more timberlands or mills if it thought the market justified increased production. We are always open to opportunities that add value to our current suite of manufacturing facilities and forestlands, says Lisa Perry, the companys community relations manager for Washington.

In an email response to questions, Sierra Pacific Chairman and CFO Mark Emmerson, Red Emmersons son, adds, We dont set our goals based on expansion for expansions sake. Instead, we look for the opportunities that will help us meet our customers needs and growing market demands. With its dependable fiber source, rich forest products legacy and experienced workforce, Washington has been a good state to invest and grow in.

What interested Sierra Pacific in the Shelton site was its proximity to timber supply, access to workers with experience in lumber production and a community that knows the forest products industry. The mill is expected to have about 200 employees at full production; Simpson had 270 at multiple locations in Mason County.

The 172,000-square-foot mill is designed to produce 500 million board feet of two-by-four, two-by-six and four-by-four studs a year. It also includes a fabrication shop to serve the companys other three Washington mills.

Mills of today are as high-tech as any other manufacturing operation. Sierra Pacific produces the software that guides lasers used to determine the best use of the log. If a particular dimension is fetching a better price, the program can take that into account and adjust how the log is sliced. Lasers also grade boards to find their highest value. While Sierra Pacific operates cogeneration facilities at other mills producing both industrial steam and electricity Shelton wont have one.

Some of the timber supply will come from Sierra Pacifics own holdings, but most of each mills supply comes from other private landowners, state lands and the U.S. Forest Service. One of the attractions of operating in Washington, Perry says, is the state Department of Natural Resources timber program, which provides a stable local timber supply.

The demand side of the lumber market equation, meanwhile, rests mainly on the housing market. While housing starts are out of the trough of the recession, recovery has been slow and hasnt yet reached long-run historical averages.

The housing market will continue with slow, steady improvements, Perry says. This type of stable increase across the broad spectrum of the housing market, including affordable housing, is an appropriate pace.

There also are opportunities for market growth in new products like cross-laminated timber (CLT). The company already makes millwork, windows and doors, but with CLT, Sierra Pacific is likely to operate as a supplier of raw material that is, lumber to those making engineered wood products.

Aside from the big issues of supply (of logs) and demand (for lumber to build houses), Sierra Pacifics challenges include competition with Canadian softwood lumber and the supply of skilled labor. Sierra Pacific has been among the American producers advocating for a trade case against Canadian imports, which are seen by the industry as being unfairly subsidized. As for labor, the company says its trying to get the message out to schools and the general public about jobs that pay well but dont require a four-year-college degree.

Sierra Pacific is now in its third generation of family ownership and leadership, and a few members of the fourth generation are already working at company operations, including those in Washington. That continuity means its likely the companys strategy and operating style are likely to continue as well.

Continued investments in technology and equipment make our mills the most competitive, efficient, safe and environmentally sound production facilities, says Sierra Pacific President George Emmerson, Marks brother. We also believe in acquisition of forestlands that we can sustainably manage for the long term to supply our mills, as well as provide fiber supply to other manufacturers. Our history and growth in the forest products sector indicates this model is working.