Despite recent reductions, military spending remains crucial to our economy even more so as priorities and attitudes change. 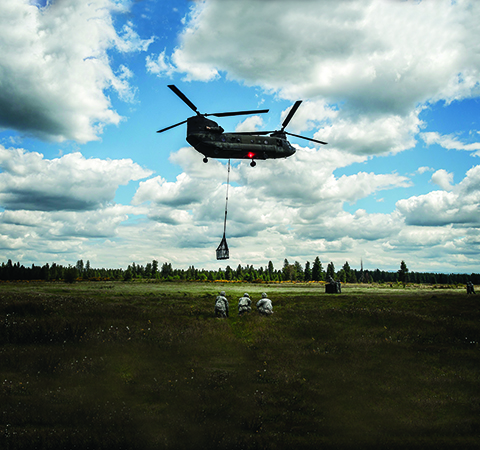 Imagine the uproar if one of the regions biggest employers cut its ranks by nearly 7 percent in the space of two years, with prospects for even more downsizing. Task forces would be convened; stern messages about the future would be read; incentives would be considered.

In fact, just such a reduction has hit one of the Puget Sound regions most significant industries, and more cuts are likely. But it hasnt provoked the same widespread pubic consternation as, say, Boeing or Microsoft do when they hint at reductions. That could be because the industry in question the military is highly concentrated in some communities, but virtually invisible in others, thus creating an out-of-sight/out-of-mind situation in some areas, especially Seattle.

Active-duty, reserve and civilian Department of Defense employment in the four-county (King, Pierce, Snohomish, Kitsap) region was 82,658 in 2014, according to the Puget Sound Regional Council. That includes major military installations such as Joint Base Lewis-McChord just south of Tacoma and the Puget Sound Naval Shipyard in Bremerton. Throw in installations outside central Puget Sound, such as Naval Air Station Whidbey Island and Fairchild Air Force Base in Spokane, and the statewide total tops 100,000.

That figure is not just similar to Boeing. It is Boeing, at least in terms of size.

Cutting thousands of jobs has already had an impact on some communities and the state, not to mention service personnel and their families. But personnel cuts arent the only way Washington will feel the pinch of belt tightening in defense spending. As the military reduces what it spends for goods and services, the 1,900 or so Washington private-sector companies that depend on defense dollars, directly or indirectly, could see their revenues cut as well.

The industry has been here for many years, but weve never treated it like an industry, says Kristine Reeves, military and defense sector director for the Washington State Department of Commerce.

Still, this is not a doom-and-gloom story. The military isnt picking up and leaving. And, unlike a plant closing, when the first inkling of trouble comes only as the layoff notices go out, military personnel and spending cuts arent happening all at once. Theres still some time for people, communities and businesses to plan and make adjustments.

Adjustments there will be. The good news is that state and local agencies as well as organizations public and private are already thinking about the militarys future the way they think strategically about an industry like software or biotech. It might even turn out that while the Department of Defense is spending less overall, its also spending more on the sorts of things that Washington is strong in.

Heres a fact to illustrate that last point. On the list of the 25 counties in the United States for defense spending on personnel and through contracts, Pierce County was 25th with $3.6 billion for fiscal year 2014. Thats hardly surprising, with the 40,800 active-duty personnel at Joint Base Lewis-McChord, the combined Army-Air Force installation. But one other Washington county placed higher on the list. It wasnt Snohomish (home of Naval Station Everett) or Kitsap (home of Puget Sound Naval Shipyard & Intermediate Maintenance Facility). It was King County, in 14th place with $4.7 billion in federal spending.

King county isnt exactly known for military facilities. The former Naval Reserve Center at South Lake Union is long gone, now the headquarters of the Museum of History & Industry. And the old Naval Air Station Seattle off Sand Point Way has been a city park Magnuson Park since the 1970s. But that spending reflects contracts to companies like Boeing, which builds a submarine-hunting aircraft based on the 737 in Renton, as well as at dozens of smaller manufacturers in places like the Kent Valley and at high-tech services companies like Microsoft and Amazon.

Its not always about things that go boom, Reeves points out.

It may be even less so as the Defense Department shifts its spending and its focus. The department has listed its tech-spending priorities in the future as including robotics and autonomous systems, miniaturization, big data and advanced manufacturing. In all of these sectors, Washington is a player.

The opportunity certainly seems to be there, says Jeff Marcell, a former president of the Economic Development Council of Seattle and King County. Now a senior partner in the consulting firm Tip Strategies, Marcell has been working on strategic planning, funded by a grant to the state, on how to position Washington to take advantage of a concerted push by Defense to be better plugged in to tech innovation.

Its not too optimistic to say the shift could wind up benefiting Washington but, Marcell adds, It is by no means guaranteed. It is essential that the dedicated effort to coordinate and encourage economic development initiatives aimed at these opportunities continues on.

Meanwhile, Reeves is keeping an eye on businesses wholly dependent on military work that need to start making changes now, ahead of spending cuts.

Theres a lot of work at the state level creating a tsunami warning system, she says. We cant necessarily change what DoD is going to do around their missions or their infrastructure. Were trying. But where we can make a difference is making sure were keeping an eye on the 1,900 companies in Washington who do business for DoD and making sure were thinking strategically every year as the National Defense Authorization Act comes out.

In one pilot project funded by the state, Impact Washington, a nonprofit consultancy working on behalf of manufacturers, worked with defense-reliant companies on implementing lean processes, enabling them to go after new lines of business.

Nobodys portfolio should be 90 percent DoD, Reeves cautions. A 60-40 split is preferable, she says, and that can be achieved not by chasing away military work but by diversifying into such sectors as homeland security or global life sciences.

Making that sort of adjustment wouldnt be new for Washingtons military facilities. Josh Brown, executive director of the Puget Sound Regional Council, has seen how it works and what happens when it doesnt as a former Kitsap County commissioner and as the son of a pipefitter who worked 40 years for the Navy.

Browns family wound up in the Pacific Northwest after years in California because of base and facility closures in the post-Cold War era. Some of the affected communities never recovered. They lost those very solid middle-class jobs that the naval base provided for a couple of decades, he says.

Puget Sound Naval Shipyard in Bremerton, by contrast, made a shift from shipbuilding to maintenance and repair, which Brown says provides much more consistent work. That gives us a lot of stability in the long term.

This summer the shipyard was expected to complete a $240 million renovation of the 40-year-old nuclear-powered aircraft carrier USS Nimitz. The ship will stay in town for its regular maintenance scheduled for 2018. Kitsap County benefits not only from the repair activity at the shipyard, but also from hosting the ships crew of 3,100 for several years.

But the battle is never completely won. The Navy is facing some expensive decisions on replacing Trident nuclear submarines, most of which are based in Bangor on Hood Canal.

You can point to programs in the region and its not just whats in the budget today, Brown says. Its some of these long-term decisions the military will make about rebuilding and recapitalizing the military that could have some pretty profound impacts on us.

I dont think theres ever an end to that critical thinking about how we keep these bases relevant. … You cant rest on your laurels. You need to be constantly proactive in terms of supporting and nurturing and partnering with the military in your community.

Complicating the strategizing and planning are an uncertain political climate (with a new presidential administration and a new Congress in the other Washington coming in 2017), budget fights and mandatory spending cuts (the term sequestration gets tossed around frequently when discussing the defense budget) and the possibility of a revival of BRAC (base reduction and closure) proceedings.

JBLM is safe as far as [its being] a strategic asset to the nation because its the major projection platform into Asia-Pacific, says Bill Adamson, program manager in the city of Lakewood for the South Sound Military & Communities Partnership. But it could be taking cuts because the entire defense industry is taking cuts.

That matters to a community like Lakewood, because many of JBLMs active-duty personnel live off base in the neighboring communities; it also employs a civilian workforce of 16,000.

One somewhat positive note is that Lakewood and other base-adjacent towns are used to fluctuations as units are deployed overseas or transferred in and out. Transitioning from the service is normal, too. Adamson says annual turnover at JBLM is typically 35 percent of the active-duty force. Of those who are leaving the service, 45 percent stay in the South Sound area to find a job or go to college.

That reality puts another challenge on the list for the state and the region, namely, finding jobs for former military personnel like Brian Goergen, an explosive ordnance disposal technician who will be leaving the Army in October after four years. The transition process is kind of difficult to wrap your head around, Goergen says, because there are a lot of costs you wouldnt have ever thought about, most notably health care.

Beyond that, the biggest challenge has been finding a job that will sustain my family for the foreseeable future. Ive got the skills to learn and the mindset to go into an environment and say, OK, I know what I need to do. Lets do it. I know I can do that. The biggest issue is not having a college education. In a lot of times, thats like an instant disqualifier. Thats a huge barrier a lot of people are facing.

Adamson, who left the Army after a 30-year career, says JBLM has one of best transition programs in the nation, and those efforts are supplemented by job training and counseling programs such as the Pacific Mountain Workforce Development Councils Camo2Commerce and the Military to Manufacturing program at the Center for Advanced Manufacturing Puget Sound (CAMPS).

Reeves says its in the interest of everyone, not just the individuals, to keep them and their expertise in the region. The Department of Defense spent billions of dollars training these people to do amazing things, she says. DoD is a city unto itself. How do we capture that talent and, with some small investments in training and apprenticeships, leverage that?