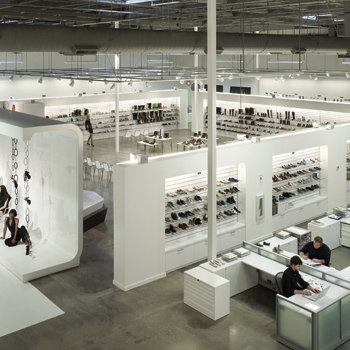 Topline Corp., a leading shoe designer that supplies
Nordstrom and other fashion retailers, had outgrown its offices. To make room
for its growing staff and product line, the company transformed its Bellevue
headquarters by converting its former warehouse into an integrated showroom,
design studio and office space.

The new design by Seattle-based NBBJ, which won an award
from the American Institute of Architects last year, succeeded in boosting
productivity by creating a more open work environment and encouraging
communication and collaboration among once disparate elements of the company
such as sales and design.

“The flow of the space makes a big impact when customers
preview collections,” says Assaf Ziv, Topline’s executive creative director.
Footwear prototypes occupy the floor’s perimeter where visiting clients can
survey hundreds of shoe designs in a single glance. Since designers now work in
the middle of the showroom, they can easily interact with customers as they
study the latest shoe fashions. Expansive showroom walls provide an
ever-changing canvas for designer sketches of the upcoming season’s new looks.

Topline sells its Report, Report Signature and R2 footwear
collections to Nordstrom, Macy’s and other major retailers and boutiques in
North America. It also designs and produces shoes for private labels and a
licensed brand. In addition to its Bellevue headquarters, it has offices and
showrooms in North America, South America and Asia.