Liz Dunn Has Blazed an Impressive Path as a Seattle Entrepreneur

Dunns career is defined by variety and marked by success across multiple disciplines, including tech, real estate and angel investing 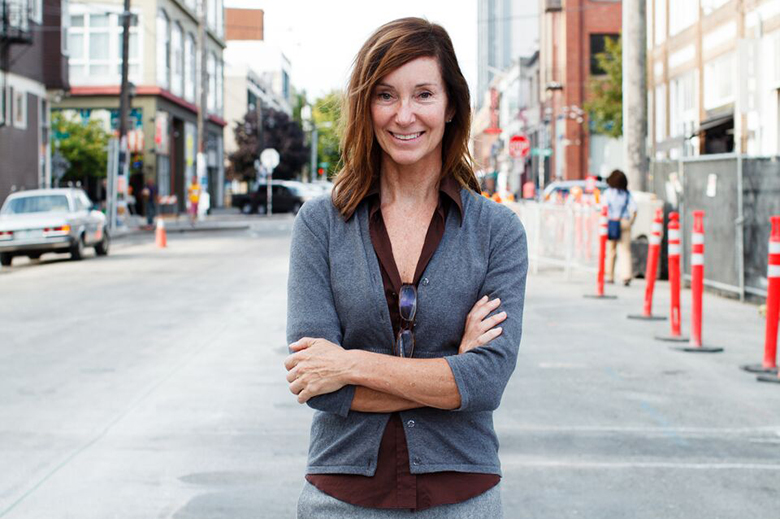 Liz Dunn is the very definition of an entrepreneur. After spending the initial years of her career as a software developer at Microsoft, she changed gears and launched her own company in a completely different field: real estate.

Through her company, Dunn & Hobbes, she has spent the past 21 years developing and managing real estate properties in Seattle. Among her companys projects are Chophouse Row, the Agnes Lofts and Melrose Market. Dunn also founded and owns the Cloud Room, which is a coworking space, culture club, lounge and bar located in Capitol Hills Pike-Pine Corridor. In addition, she owns two affiliated businesses: Cloud Studios, a practice facility for musicians; and the Overcast Room, a podcast-recording studio.

More than half of Dunns retail and restaurant tenants are women- and/or minority-owned businesses. She also is angel investor, with stakes in tech, alternative energy, cannabis and various consumer-facing companies.

What are the most important characteristics of a good leader and what leadership traits are overrated? I think a good leader asks questions first, before doing all the talking. Women sometimes assume that asking questions is a sign of weakness, but Ive had the opposite experience. As long as they are smart thoughtful questions, its an incredibly powerful way to engage, steer the conversation, and frankly catch the attention and impress those who may not know you well. With employees and customers, it shows youre authentically engaged if you really dig in and ask the second or third follow on questions. Also, a self-deprecating sense of humor is essential. I do not think its self-demeaning; its a great leveler. Either way, I cant help it; its the Canadian in me.

As a woman, what is the most significant barrier to becoming a leader? Unconscious (or conscious) bias is real and 30 years into my career, I still experience it. Small example: Im one of the only woman investors in a tech fund and at a recent investor conference, one of the presenters took questions from every man in the room but skipped over me. I dont know if he assumed that I was not an investor, assumed my question would be dumb, or just assumed I wasnt important. The trick is to turn it to your advantage surprise people and make an impression, by continuing to speak up and being the smartest person in the conversation.

I love that slightly shell-shocked look on a mans face when he realizes he completely misjudged the situation. Call people out if you absolutely have to but try to use humor because again it defuses the situation while giving you the upper hand, shows youre smart and dont have a fragile ego for example, Wow thats a GREAT idea, and Im not just saying that because I suggested it five minutes ago.

How can women achieve more prominent roles in their organizations? You simply cant expect anything to be handed to you on principle e.g., because women deserve a break. Its not going to happen. Ask for what you want, volunteer for opportunities, seek out sponsorship from women and men in leadership positions within your organization. Get involved in civic and nonprofit organizations; get yourself on a couple boards to practice your leadership skills. Act like a leader. And dont ever be afraid to be fired for what you believe is correct.

Real change happens in these moments, when managers/employers can see in your eyes that you really are going to walk out the door if fundamental issues arent addressed. The respect dynamic permanently shifts. These situations arent about being a drama queen. They are about exercising your personal power to make choices and earning peoples respect for doing so.

What key lessons did you learn from a woman who has inspired, mentored or sponsored you? I didnt have a lot of women examples or mentors within reach early in my career; the nature of finance and tech in the late 80s meant that there were not a lot of women in core roles. The few technical women were very talented, but I didnt see myself in them.

More recently Ive been inspired by how women of my generation my peers back then have grown into tremendously impactful leadership roles. Melinda (French) Gates was a friend and coworker at Microsoft when we were both 22 years old. I am so impressed and inspired by the work she is doing to further opportunities for women and girls around the world and stand up to the Catholic Church on issues of family planning, even though she herself was raised Catholic.

Charlotte Guyman, another friend of mine from those days, has been a longtime board member at Berkshire Hathaway, Warren Buffetts company. Adrianna Huffington is someone I admire from a distance for the number of times she has reinvented herself in groundbreaking ways. Ditto Jane Fonda I saw her speak recently and she is one of the sharpest political minds out there, at the age of 80-plus.

What advice do you have for the next generation of female leaders? Pick the right partner. OK, that sounds flippant, but Im serious. A key reason why professional women in the U.S. are lagging their European counterparts is that child rearing and domestic chores are still not being shared equally.

We all need to fight for better family-leave policies and mandatory paternity leave so that both parents bond equally with their kids. I dont have kids myself, and yet this is something I feel passionately about because Ive seen the careers of so many smart women I know get sidelined because of the lack of support at both work and at home.

How important is networking and how do you expand your contacts? Although Im quite a private person, Im also able to be very gregarious in a business context. I really enjoy meeting smart people and working on hard problems, especially civic issues. My life and career have been remarkably enriched by my community involvement with such organizations as the Downtown Seattle Association, Capitol Hill Housing, The Pike Pine Urban Neighborhood Coalition and others.

I started my first coworking space in 2012, and now own and run the Cloud Room, a coworking space and cultural venue (and bar!) that is now the ultimate test of my skills as cruise director. I get deep satisfaction from introducing members to each other, seeing connections between what they are working on, and helping them with entrepreneurial resources, such as pulling together a panel of peers to review their business plan or making connections to potential funders.

What would you do differently in your career? Well, I probably should have bought a lot more real estate on Capitol Hill 20 years ago. But none of us has a crystal ball, and Im not someone who has regrets. Im also not someone who operates according to some long-term plan. I try to stay nimble and jump at the opportunities as they pop up.

Arguably, I sometimes jump too quickly but I think thats better than the opposite, i.e., the kind of over-analysis that leads to paralysis. The best decisions in my life are ones that I might not have made if Id thought about them too much.

Where will we find you on a Saturday afternoon? Skiing at Whistler or boating in Canadas Gulf Islands. Or if its a rainy day, hunkered down in my Lake Union houseboat with my dog, devouring design and travel magazines.

What would be the title of your autobiography? Travels with Bacon: A Woman and Her Dog Explore Small-Scale Urban Development From an Airstream.

I realize this may need some explaining. Its a riff on the John Steinbeck novel Travels with Charlie, where he drives around the country and observes American cities and culture.

Three years ago, I bought an Airstream trailer and since then Ive been driving rather than flying to conferences with my geriatric dog, Sir Francis Bacon. It gives me an opportunity to see a bunch of interesting up-and-coming cities and what they are doing in the way of planning and cool small-scale development. As I write this, Bacon and I are driving to Oklahoma City by way of Boise, Salt Lake City and Santa Fe.

Wed love to hear from more women across all industries who are challenging the status quo. Does it sound like you? If it does, click here and fill out our questionnaire.