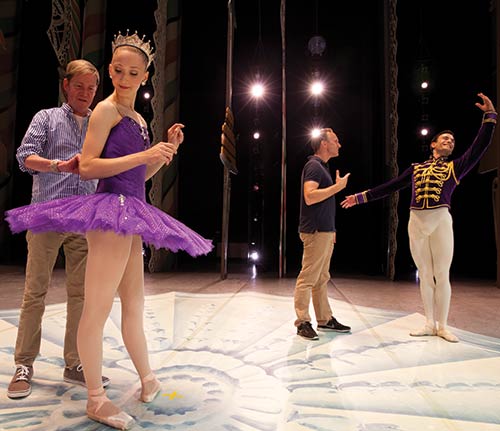 When Pacific Northwest Ballet announced its adieu to the Kent Stowell/Maurice Sendak version of The Nutcracker last year, many reacted with a plaintive groan. For scores of local patrons, PNBs Nutcracker represented a special, all-important holiday tradition, as essential as your father-in-laws cranberry relish.

Yet PNB Artistic Director Peter Boal decided his company was done with the critically acclaimed production, which had warmed local audiences for more than 30 years and vaulted PNB onto the national stage. Beginning this year, Boal said he would bring George Balanchines The Nutcracker to the McCaw Hall stage, with new costumes and sets by Ian Falconer, the illustrator beloved for his Olivia childrens books.

Audiences in New York City have marveled at the legendary Balanchines Nutcracker, with its Sugar Plum Fairy and its Land of the Sweets, since 1954. Its the gold standard, says Boal, who danced in the production when he was with the New York City Ballet. I have a great reverence for the production. I love it.

Boal also believes PNB can make the Balanchine shine. We have this talent, he argues. I just wanted Ians take on it.

Before his Olivia the Pig books tickled the imagination of children and their parents, Falconer designed sets and costumes for opera, theater and ballet, including the New York City Ballet. He grew up in Connecticut and greatly admires Balanchines Nutcracker. I was about 4 years old, he says of the first time he saw the production at Lincoln Center. Ive probably been to see it 31 times over the years.

Falconer says one of the first questions Boal asked him was, Do you agree that the New York production of The Nutcracker is the best one youve ever seen?

I was able to say yes, Falconer answers, because Ive seen a few, including productions in Paris, at the Bolshoi, at American Ballet Theatre. And Ive never liked them as much.

Boal and Falconer say the beauty of the Nutcracker story is its simplicity: a girl, her nutcracker doll and a magical, wintry Christmas adventure. In Balanchines version, Clara remains a girl throughout. Another significant story change: Instead of arriving in an exotic Turkish kingdom, Clara now sails aboard a walnut boat into a realm of candy cane columns and dancing marzipan.

This one is very toy-like, Falconer says of the new production.
Boal accepts that theres some risk in changing productions after three decades. [But] I would have felt a much greater risk commissioning a Nutcracker from a choreographer, he asserts. The PNB dancers, Boal points out, love Balanchines choreography the musicality, the exquisite steps.

Theres no wasted energy, says PNB soloist Sarah Ricard Orza, who danced Balanchines Nutcracker hundreds of times during seven seasons with New York City Ballet. Theres no excess movement. Its pure beauty to watch, because the choreography is so pristine and precise.

As for the financial risk, Kurt Beattie, who has overseen years of another local holiday tradition A Christmas Carol as artistic director of Seattles ACT Theatre, says, I suppose any new production risks missing the core value of the work, but I dont think its the same risk as with a regular new ballet or a new play. We know these works are great and enduring and have connected with audiences for many, many years.