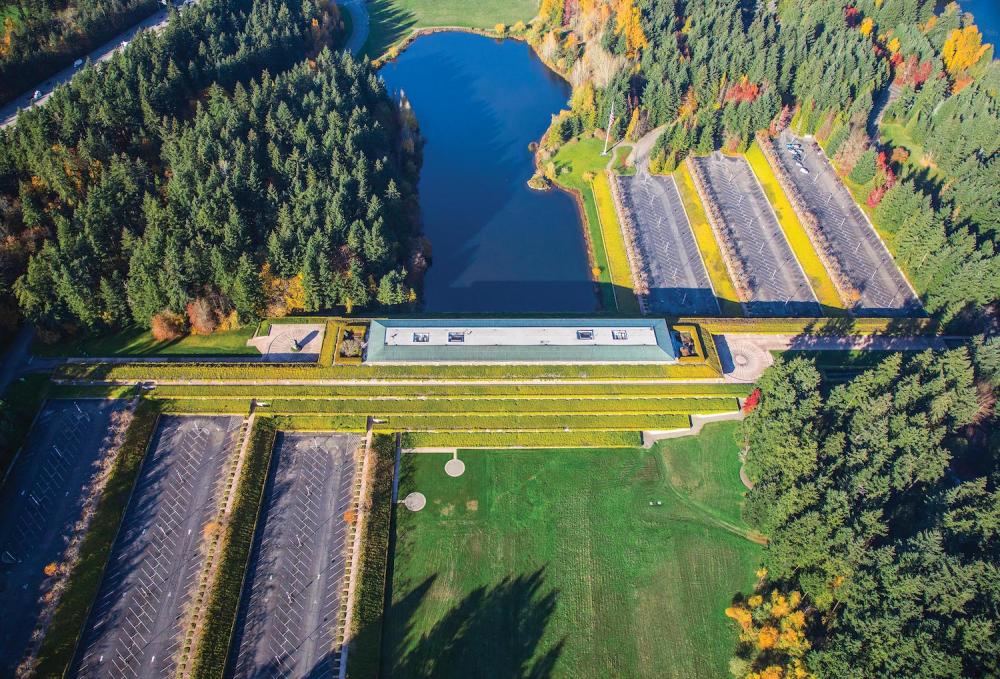 An ambitious redevelopment project in Federal Way promises to create 3,100 family-wage jobs and $9.9 million in annual tax revenue. Detractors are vociferous in their opposition and come from groups and individuals across the country.

In a career-spanning three decades developing commercial real estate, Dana Ostenson says hes never seen anything quite like this.

Ostenson is executive vice president of Los Angeles-based Industrial Realty Group, or IRG. The company purchased the bucolic 425-acre Weyerhaeuser campus for $70.5 million in 2016 after the timber giant decided to move its corporate offices to Pioneer Square.

Its been quite a ride, Ostenson says. All were trying to do is save the core parts of the campus.

IRG operates a portfolio containing more than 150 properties in 28 states with more than 100 million square feet of space. Its holdings include the Johnson Controls Hall of Fame Village adjacent to the NFL Hall of Fame in Canton, Ohio, and the New York Center for Innovation, a 200-acre biotech facility in Pearl River, New York.

IRG has renamed the former Weyerhaeuser property Woodbridge Corporate Park and has proposed creating an industrial campus in accordance with current zoning. It wants to redevelop 63 acres, or approximately 16% of the entire campus. Plans include leasing the 335,000-square-foot, five-story headquarters building and the tech center, a structure that contains lab and office space. IRG also wants to construct five additional warehouses.

Ostenson is quick to point out that IRG is not seeking any zoning changes. Several court rulings have gone in the companys favor, including by the citys hearings examiner and state Superior Court. He insists that the court of public opinion is with us, but opponents have been loud and clear in their hostility toward the project.

Most of the fervent opposition centers around environmental concerns related to IRGs plan to construct the warehouses. The campus also contains forested land, trails, meadows, tree buffers, green open space, a lake, and wetlands, including the Bonsai Garden and Rhododendron Garden.

A local group, Save Weyerhaeuser Campus, says it is concerned about the destruction of wetlands, deforestation, loss of bird and animal habitat, and reduced public access to the campus. It also cites increased noise and air pollution from up to 800 semitrucks that would serve the warehouses daily, as well as an additional 4,600 vehicles used for commuting. The project is opposed by former Weyerhaeuser Chief Executive Officers George Weyerhaeuser and Jack Creighton.

Nationally, opposition has come from several groups, including the Cultural Landscape Foundation, a Washington, D.C.-based nonprofit dedicated to connecting people and places. An entire section on its website is called Weyerhaeuser Letters, missives from numerous architects, educators and historians across the country opposed to the redevelopment for a variety of reasons. The former Weyerhaeuser campus is one of 154 across the country that the foundation considers at risk due to neglect, redevelopment or destruction.

In one letter, acclaimed landscape architect Martha Schwartz wrote in a letter to Federal Way Mayor Jim Ferrell and Col. Alexander Bullock, Seattle district commander of the U.S. Army Corps of Engineers, that the destruction of the Weyerhaeuser headquarters campus is exactly what we should not be doing today. The defiling of this landscape and the forests that are at its heart would be an embarrassment to the city of Federal Way and IRG, adding that the campus is a masterpiece containing a wealth of important and undervalued environmental benefits.

Another critic, Craig Hartman, a partner at Chicago-based global architectural and engineering firm Skidmore, Owings & Merrill, wrote to Ferrell and Bullock that the redevelopment proposal for this bucolic, environmentally sensitive site…is a quick way to monetize the site and perhaps the lowest common denominator in real estate development. He also wrote that a more visionary development could avoid the more than 800 semitrucks that the developer states will move through the site and onto local streets and highways every day.

Other objections cite the architectural beauty of the campus and its cultural and environmental significance. One, by the Society of Architectural Historians, notes that several groups oppose the project, including Rainier Audubon, the Historical Society of Federal Way, and the Washington and National Trusts for Historic Preservation.

The construction of a series of enormous concrete warehouses, replete with concrete truck delivery bays, surface parking and a soulless retention pond, irrefutably diminishes if not destroys the integrity of both architecture and landscape, wrote Bryan Clark Green, chair of the Society of Architectural Historians Heritage Conservation Committee.

Ostenson says three years of construction delays and a year of campus operations have cost Federal Way about 4,000 jobs and $20 million in tax revenue and impact fees. Several global companies have inquired about the space, he adds, including some in the biotech industry.

The Federal Way Chamber of Commerce endorsed the project from the beginning, says President and CEO Rebecca Martin, who notes that IRG has been responsive and sensitive to both citizen concerns and the need to preserve most of the 50-year-old campus.

They want to work with this community in making this a viable economic engine and theyre mindful of that natural setting. Thats not always the case in economic development, says Martin, who has led the chamber for seven years. All these things speak directly to the potential of developing that property as a way to create living-wage incomes.

Ostenson says IRG hired an architectural historian to study the campus, which was considered cutting-edge and visionary when it opened in 1971. He adds that IRG has balanced original development site plans to preserve the property while also maintaining maximum flexibility to lease the buildings. He says the company is planning to break ground this summer.

I think were almost there, he says, noting that IRG has prevailed at every legal and administrative level. The efforts that we have made to preserve the beauty of the campus are above and beyond what developers do.