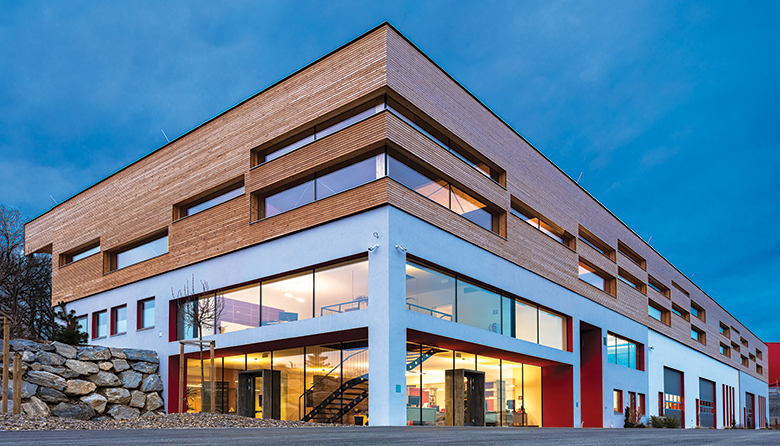 FAST AND STRONG: A warehouse in Altlengbach, Austria measuring 65 feet by 236 feet incorporates massive CLT panels and took only four months to build that annual figure is expected to rise by more than a million people each year. Photo courtesy Luft-Klima Luftungstechnik GMBH

EDITORS NOTE: In June 2015, we introduced readers to cross-laminated timber and its potential to revive a legacy Northwest industry. Here is an update.

Cross-laminated timber (CLT) is the clumsy name for a new construction material whose strength, beauty and ease of use offer the potential for revolutionizing construction of high-rise buildings and multifamily housing in Washington state.

Also called mass timber, which includes laminated beams like glulam, CLT is far stronger because its engineered by crisscrossing and laminating layers of lumber into large panels, a process that allows relatively small trees harvested during forest thinning to be used for structural elements. While steel and concrete more commonly used in large structures produce far more greenhouse gases, CLT stores carbon and wins praise for being environmentally friendly.

Used for years in Europe to build residences and offices, it more recently has been adopted elsewhere. Last year, the University of British Columbia completed an 18-story residence hall made from CLT. Oregon has aggressively promoted the manufacture and use of CLT.

Washington state, once a lumber giant, is now establishing a presence in the sector. Last year, the state allocated $5.5 million for the construction of 20 modular elementary school classrooms made of CLT three in western Washington (including one on Beacon Hill) and two in eastern Washington.

In March, Governor Jay Inslee signed a bill directing the state to update its building code to adopt rules for the use of mass timber. The new codes, which could be adopted as early as next year, would permit mass timber buildings of up to 18 stories, more than twice the current 85-foot height limit.

In September, a groundbreaking cere-mony in Spokane will celebrate Catalyst, a five-story, 150,000-square-foot structure that will be Washingtons first office building built of CLT.

At least two 12-story CLT-buildings are being proposed in the state one in Vancouvers new urban center along its waterfront and the other in Seattle. The Seattle project, for which a site has been selected but not disclosed, will be led by a team that includes Heartland LLC and DLR Group. Matthias Olt, a senior associate with DLR, was part of a group that received an honorable mention from the Seattle chapter of the American Institute of Architects last year for conceptualizing a 40-story high-rise residential building made from mass timber. Coming Soon: The 150,000-square-foot Catalyst Building in Spokane will be the first office building in Washington constructed with CLT. Photo courtesy Stora Enso.

Katerra recently raised $865 million in venture capital to finance its vertical model, which includes prefabrication of materials, architectural design and final assembly of multifamily housing. The company has made a significant commitment to CLT and, in May, acquired Michael Green Architecture, the Vancouver, B.C.-based leader in designing CLT buildings.

Michael Marks, one of Katerras cofounders, a former senior executive in global supply chain and quality at Hewlett-Packard, believes using CLT in construction will allow for the introduction of mass-production techniques common in electronics.

Washington-based CLT manufacturers expect to see strong demand. Mass timber manufacturers in Oregon and British Columbia report full shifts, says Russ Vaagen, owner of Vaagen Timbers. If Vaagen had three full-scale plants running two shifts, we would be sold out right now, he says. Realistically, the market hasnt figured out how big the demand is yet.

Were definitely at that inflection point where almost everything is in place for widespread adoption of mass timber, says Todd Beyreuther, a senior director with Katerra. We now need to demonstrate a few more pilot projects to really get over that last hurdle of jurisdiction and acceptance because everything technically is there.

Beyreuther says Katerra has more than 17 CLT projects in its pipeline, two of them in Washington: the Catalyst building and a new hospitality center on Kootenai Healths Spokane campus. Elements of Style: CLT, which sonsistes of bonded panels arranged at right angles to each other, offers new architectural possibilities.

Despite the current activity, it may take some time before CLT construction goes mainstream in Washington. For one thing, relatively limited production capacity exists now. Katerras manufacturing facility, for example, will only produce panels for its own projects, many of which will be out of state. Oregon-based D.R. Johnsons CLT factory is fully booked for the next 10 to 11 months, according to founder Valerie Johnson, although it has some capacity for minor projects.

One challenge: the high cost of building new factories to produce CLT panels. Several Washington cities including, Port Angeles and Longview, want to attract CLT manufacturers but investors arent willing yet to put up the more than $30 million it typically costs to build a new CLT plant.

As well, CLT panels built at new facilities must be certified to ensure they meet the American National Standards Institutes requirement on such properties as structural performance, type of adhesive used and moisture content. For Vaagen Timbers and Katerra, this will likely mean delays in fulfilling orders from contractors.

Some environmentalists fear that a robust CLT industry would promote more harvesting of Washingtons public forests. Proponents, however, note that Washington state has forest-practices rules that are among the most stringent in the country. Katerra and Vaagen Timbers placed their manufacturing facilities in eastern Washington because of the long-term availability of wood from fuels reduction and restoration work on nearby state, federal and private lands.

CLT proponents also point out that the lumber used for CLT will consume a relatively small proportion of total wood harvested in the state.

It will be a minuscule amount of the overall fiber supply in the region, says Indroneil Ganguly, associate director of the Center for International Trade and Forest Products at the University of Washington and one of the authors of CLT Demand Study for the Pacific Northwest.

If Washington can successfully develop its CLT industry, it will create an economic incentive for thinning forests. That means the CLT industry could end up not only creating jobs and providing materials for more beautiful, environmentally sound wooden structures, but could also limit the severity of wildfires and the risk that they burn out of control.