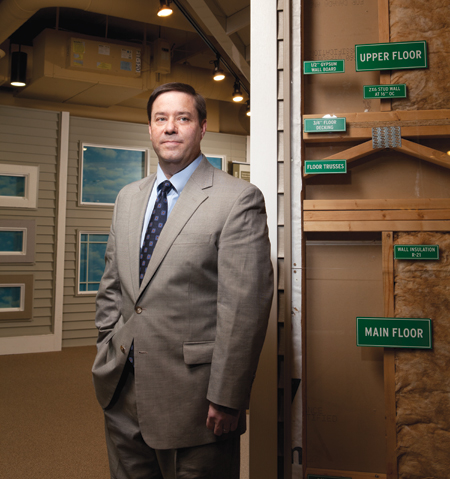 For the past three years, a curious feature has been added to the landscape of Washington: the subdivision with no houses.

Streets, cul-de-sacs, curbs with cutouts for driveways, light posts, utility boxesall the features of a standard suburban housing development would be in place, except for the houses.

Or perhaps one house, standing by its lonesome amid dozens of vacant lots. Those house-free subdivisions were merely the most obvious physical evidence of the collapse of new home construction in this state.

More evidence can be found in the data. While locales such as Las Vegas, Nev., got much of the national attention for the housing industrys precipitous decline, Washington didnt escape the damage. Data compiled by the U.S. Department of Commerce and Washington State Universitys Washington Center for Real Estate Research (WCRER) show a statewide slump of 69 percent in single-family building permits from 2005 to 2009. In some places, the tumble was even worsenearly 72 percent in King County, for example.

Still more evidence can be found in the list of Washington banks that failed during the recession. Many loaded up on land development and residential real estate construction financing, on which borrowers defaulted when the market fell apart and homes didnt sell.

But after a long and brutal winter for the home construction industry, there are signs that spring is arriving metaphorically as well as literally.

Look at the statistics: In the first nine months of 2010, single family building permits in Washington were up 20 percent from a year ago. In King County, when you also include multi-family construction, permits were up 163 percent.

The warming trend is also evident in announcements builders and developers are making. Pulte Group, one of the nations largest housing developers, bought residential lots and other undeveloped land at Snoqualmie Ridge, a large master planned community in King County, from a joint venture of Quadrant Homes (a Weyerhaeuser subsidiary) and the Murray Franklyn Family of Companies.

Pope Resources, the Poulsbo-based timberland management and property development company, said it had received regulatory approval for its Harbor Hill project in Gig Harbor, with plans for 554 single-family homes on the 200-acre site. That approval means the project is poised to react to improving market conditions, the company reported in its announcement.

On the other side of the state, Greenstone Corp., a builder of new homes based in Spokane, says it has already sold 17 of 20 residences in the first phase of development at the Kendall Yards project near downtown; in phase two, 14 of the next 20 were sold even as construction on them started.

Its not a roaring recovery by any means. That same WCRER report on third quarter 2010 showed that housing permits in Snohomish County, a source of real estate headaches for a number of banks, actually dropped by 31 percent from a year ago. Pierce and Kitsap counties were down, too. Ill be interested to know when out of it is, says Ken Krivanec, president of Quadrant Homes, referring to the downturn.

WCRER director Glenn Ellis Crellin cautions, Real estate cycles are longer than most people believe. Nationally, home sales in the previous major cycle peaked at about 4 million units in 1978. We didnt see 4 million resales again until 1997 as the market surged to 6-million-plus by 2005. Between 1978 and 1982, the sales rate declined by half, about the same as during this cycle. During that cycle, a partial rebound was fairly steep, but I expect this cycle to be more gradual because the value declines were much sharper this time and the overall recession was far more severe.

Still, the housing industry does appear to be in recovery mode, however anemic, and if so, thats good news for the economy. Home construction directly accounts for thousands of jobs. The Employment Security Department of Washington State notes residential building jobs dropped from 33,200 in August 2007 to just 20,100 in August 2010a 39 percent slide. And thats not counting all the jobs lost in related and support activities ranging from building products manufacturing and wholesaling to furniture and appliance retailing to finance.

Youre not going to have any kind of recovery without construction, says James Moen, owner of Lexar Homes, which builds houses around the state.

Several factors are contributing to whatever rebound the industry can muster. The builders that are left, the developers that are left, theyve got to do something, Moen says. Theyve got to put people to work. Developers and banks holding land figure they might as well build a few to see if someone will buy them. Builders moving back to the more affordable segment of the market and government programs to encourage home buying are helping too, he adds.

Builders and buyers are also getting a break on the cost of land and materials. Its a market with great opportunities with our suppliers, with our subcontractors, says Jason Wheaton, president and chief operating officer at Greenstone. Were getting pricing we havent seen since 2002.

Moen knows of one instance of a developer buying lots for $150,000 each for spec building, only to hand them back to the bank when the market imploded. Eventually, those lots were resold at half the price.

Whether its building less expensive houses in response to customers constrained budgets or just pricing inventory to move, theres a definite trend toward lower prices for new homes. Data compiled by New Home Trends Inc., a provider of residential real estate information in the Pacific Northwest, show the November 2010 median price for a new home sale in the Puget Sound region was $275,000, down 9.5 percent from the previous year.

There are also opportunities for developers and builders who find niches in which theres still demand. Krivanec and Moen both cite military families and growth at local bases, which could be a long-term boost for housing construction, given the expansion plans for Joint Base Lewis-McChord.

The communities that did really well in 2009 and 2010 were those close to military installations, Krivanec notes. They had very healthy numbers. Not far from the base, Quadrant has lined up a new community, Brink Ranch, near Parkland-Spanaway, and in January 2012 will begin selling homes on the 145 lots currently under development.

For Greenstone, the niche is a range of housing options and prices for downtown workers. Were seeing pent-up demand from people who really want to be within walking distance of the [Spokane] urban core, says sales manager Jayson Hunnel.

Housing construction has undergone slumps before, but this one has been notable for its breadth, depth and duration, which has meant changes for the industry.

For starters, there are fewer participants, and those that survived did so because of conservative financial practices. The guys who really got in trouble were the ones who went and paid too much for dirt, says Moen, whose company doesnt purchase land for development but builds homes on property its customers have already bought.

Weve been very careful in the up market not to get carried away with inventory, adds Greenstones Wheaton. Without such discipline, When the market turns, that just means youve got enormous inventory built into your project. And [property owners] have the ability to sell for less than you can, and probably have to.

Buyers have changed, too, which means builders and developers need to change.

You dont want too much elasticity in distance between what you perceive the buyer wants and what they actually want, Krivanec says. To narrow that gap, Quadrant is putting much more emphasis on market and customer research, getting it right with what the product and the offering is and the experience the buyer wants. What we know is, in the last couple years, the Northwest home buyer has changed dramatically.

For Quadrant, that shift has meant a change in marketing and development strategy from More Home, Less Money, which emphasized the square footage the buyer was getting, to Built Your Way, which puts more emphasis on the degree of customization buyers can put into their homes with the features they select.

Theyre much more discerning, Krivanec says. When you think about the economic pressures that are on a home buyerthe mortgage underwriting, qualifying, the hard-earned down payment requiredtheyre more clear on what they want entering the housing market. … Theyve said just the price of admission to come out and look for any builder, and particularly for us at Quadrant, is a list of features that we once didnt offer.

Moen says houses will get smaller and more energy efficient on average to reduce not only the up-front payment but the continuing cost of utilities to operate that home. 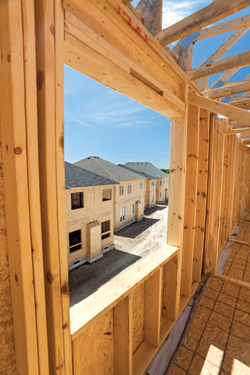 And, of course, the financing has changed for developers and builders and people buying homes. Most [banks] will continue to lend; its still a viable business, says Sara Hasan, banking analyst with McAdams Wright Ragen in Seattle. But with regulators leaning heavily on banks to rebalance their loan portfolios, lenders will be reluctant to rebuild heavy concentrations of real-estate-related lending. Then again, demand wont be there, Hasan adds. Those [builders] who do get financing will tend to be larger, well-capitalized players with a lot of skin in the game.

More now than ever, your past performances make a difference; the relationships you have earned [with banks] are important, Wheaton says.

Banks will influence the home-building industry another way: how they handle the inventory of homes theyve repossessed and want to sell, and those properties theyve yet to take back but may have to.

We cant really ascertain how large that inventory really is, Crellin says. Certainly, lenders have taken back large numbers of properties and they have not resold all of them. Whether they are choosing to operate those properties as rentals until the market stabilizes, are merely holding on to them for a few months in hopes conditions improve or have liquidated them for the best offer, is why [some inventory is] in the shadows.

We certainly know that there is a pipeline which will add to that inventory in the months ahead, and those properties will continue to exert downward pressure on prices for months, probably most if not all 2011. This will restrain significant increases in single-family construction this year. Population and employment growth would allow the market to absorb the inventory more quickly, but the sluggish job growth is not sufficient.

If banks were to flood the market with those properties, then we would be talking Depression time, Moen says. But he thinks builders can counteract the impact of a gradual release of foreclosed properties by emphasizing the attractiveness of a newly completed home against one thats been sitting vacant for months, possibly enduring weather damage and vandalism or theft.

To muddy the picture further, builders and developers are emerging from the recession just as a major demographic trend gains momentum: baby boomers entering their retirement years. Will they downsize and unload their homes, adding more inventory to the market, get out of the single-family detached dwellings in favor of apartments and condos, buy a different type of house or stay put?

The uncertain future will compel builders to remain flexible. Says Wheaton, 2011 will bring us a rebound. But in order to take advantage of it, he adds, You have to be positioned well.