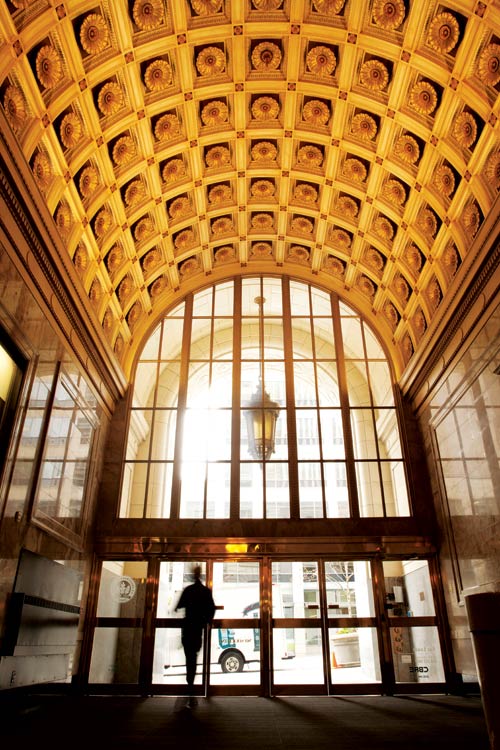 Last year, Seattle was Americas sixth-fastest-growing city, according to Forbes. Much of that growth has involved tearing down old buildings and putting up new high rises, a process that often sacrifices beauty, tradition and sustainability in the service of increased density.

Now, however, more developers are confronting the distinct challenges and rewards that come with extending the lives of old buildings through modern retrofits. While these projects can be more complex, often requiring extensive seismic and energy upgrades, retrofits can reduce the carbon impact of building construction, maintain diverse and thriving neighborhoods, and contribute to a sense of community and city pride.

Seattle has a core group of advocates for older buildings, many of whom have taken their talents to the already dense and desirable Capitol Hill neighborhood and the downtown corridor. For instance, Michael Malone, principal of Hunters Capital LLC, bought the Sorrento Hotel 33 years ago when it was in danger of being torn down for condominiums; he now owns a number of buildings in the Pike/Pine corridor, including the structure now housing The Elliott Bay Book Company, as well as several of the former automobile showroom buildings that dominate the neighborhood. And Liz Dunn, of Dunn and Hobbes, founded Preservation Green Lab (PGL), a department of the National Trust for Historic Preservation that works with cities and environmental organizations to incorporate reuse of buildings into those cities larger sustainability goals.

Were at this really neat inflection point in building design and technology where we have all the strategies available to do high design married to the strengths of the building, says Ric Cochrane, associate director at PGL.

In early 2012, PGL released The Greenest Building: Quantifying the Environmental Value of Building Reuse. The report, nearly 100 pages long, made a detailed analysis of buildings in four climate zones and concluded that in almost every case, reusing an existing structure offers an environmental saving when compared to demolition and new construction.

Seattle is also a participant in the 2030 Challenge, one of many global efforts to reduce the impact of the building sector on climate change. Launched in September 2011, the Seattle 2030 District describes itself as an interdisciplinary public-private collaborative working to create a groundbreaking high-performance building district in downtown Seattle. In many cases, it is doing so by upgrading existing structures to meet current energy standards.

Seattles Dexter-Horton building, a historic downtown landmark that falls within the 2030 District, is a retrofit success story. Opened 90 years ago, the 15-story office building at Second Avenue and Cherry Street is appreciated for its white terra-cotta exterior and stately columns. The buildings management team invested in significant upgrades in 2006, bringing the structure from an energy rating of 60 to 78 within one year and, eventually, to its current rating of 96, meaning it performs better than 96 percent of similar buildings nationwide. Low-flow water fixtures and light sensors helped achieve a LEED-EB Gold certification. Most of the retrofits began generating net savings within three years, and the building team says lower operating costs have made the space desirable to tenants and have kept the building competitive in a tight market.

One reason to keep older structures around is that many of them are surprisingly efficient, even without upgrades. The 2011/2012 City of Seattle building energy benchmarking analysis report, which collected whole-building annual energy use for commercial and multifamily structures of 20,000 square feet or larger, found that those built between 1920 and 1945 had the lowest energy use. The second-lowest energy use was in buildings built before 1920. This is evidence that the simple principles used to design these older buildings still work, says Andrew Lee, a green building consultant and the volunteer chair of the Seattle Living Building Collaborative. Theyre still relevant. Theyre going to continue to work for hundreds of years.

In an era when energy was neither cheap nor abundant, Lee explains, it made sense to maximize daylighting with larger windows and greater distances between floors. The Dexter Horton Building is shaped like a capital E with an extra arm, so daylight can penetrate into much of the office space. Paired with smart sensors that can turn lights up or down as needed, good daylighting makes it easy to keep electrical costs from skyrocketing. Natural ventilation, when supplemented with modern systems that carefully control heating and cooling, is another asset. A lot of times, successful green retrofits rely on returning a building to its original functionality, Cochrane says.

Economically, retrofits are a balancing act for developers, sometimes requiring what Cochrane calls patient capital. Scott Shapiro, managing director of Eagle Rock Ventures LLC, who partnered with Dunn on the Melrose Market building retrofit on Capitol Hill, says that project is about slow gains rather than making money right away. Most of our investors are friends and family, and were in it for the long term, he notes, not only financially, but as a community investment.

But retrofits are sometimes significantly cheaper than building new. Jonathan Heller, an engineer at the Seattle consulting firm Ecotope, says it handles two types of older buildings: those with historic characteristics that make them desirable, such as exposed beams and brick construction, and others that are less charismatic but can still be renovated to a high standard of energy efficiency.

The Bremerton architecture firm Rice Fergus Miller turned an abandoned 1948 automotive center in downtown Bremerton into one of the most energy-efficient office buildings in the nation for $105 per square foot, Heller notes. Thats less than half the cost of new construction. The building now has a LEED v3.0 Platinum rating. He also points to the King County Housing Authoritys new central office building, a renovated strip mall in Tukwila redone for $95 per square foot. Ecotope estimates the green upgrades incorporated into the building redesign will save $35,000 per year in operating costs and 890,000 pounds of carbon dioxide emissions annually.

Heller says the green building movement has greatly influenced the real estate market in Seattle, because theres high demand for low-impact, smartly renovated buildings. While character doesnt hurt, theres little to be lost and much to gain by using the latest design intelligence to upgrade outdated structures. Were growing, but theres not a lot of empty space, Heller adds. If were going to grow, we have to take the old buildings weve got and give them facelifts.

Old buildings are part of the fabric of the city and they are, to some extent, irreplaceable. Although todays world economy allows builders to use materials manufactured thousands of miles away, structures from 100 years ago are likely made with wood and brick that was locally sourced.

By preserving them, Lee says, youre preserving some of the natural history of that place. We dont have that many historic structures compared to older cities, and the structures we have are very precious.

Older neighborhoods also attract young companies and the creative class, and may support a strong local economy. Cochrane says Preservation Green Lab is collecting data on neighborhood performance metrics. What were finding, he says, is that older blocks with diverse building types and certain characteristics that are indicative of older buildings have higher economic performance.

This may be partially explained by the lower rent and smaller storefronts in many older buildings, which make them accessible to small businesses with a greater economic multiplier at a local level. Im not against new construction and Im not anti-high rise, Cochrane says, but theres a lot to be learned from older neighborhoods.

King Street Station is one recent example of that synergy. The 1906 structure is an iconic piece of Seattle history, but it suffered through multiple remodels that hid the original ceiling and removed historic lighting and plaster. After the City of Seattle bought the station from Burlington Northern Railroad in 2008, a team of architects, engineers and designers embarked on an ambitious renovation, restoring historic elements such as the ornate ceiling and 12-story clock tower, bringing the station up to code seismically, and updating electrical, mechanical, plumbing and fire protection systems. The building received a 2014 Honor Award from the American Institute of Architects and a LEED Platinum certification.