Rental Market May Finally Be Cooling Down in Greater Seattle. Still Hot in Tacoma.

With new units on the market and occupancy down, rents are growing more slowly. 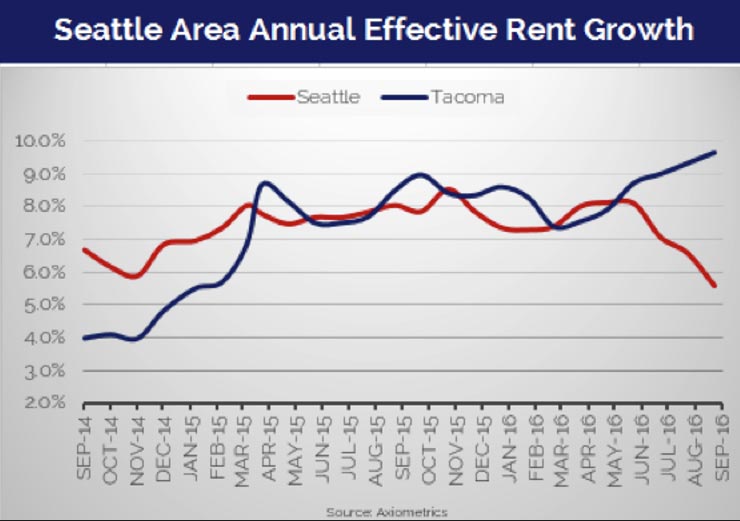 In a sign of what could be the beginning of the end for the hot rental market, average rents are no longer growing at a torrid pace. While average monthly rents increased by 5.6 percent to $1,777 in the Seattle/Bellevue/Everett area in September from the year before, average rents actually declined slightly from the previous month.

Seattle is still among the top-performing metros in the nation, but deliveries of new units accelerated in the third quarter and the pace is expected to quicken through the second quarter of 2017, says Jay Denton, senior vice president of analytics for Axiometrics, a market research firm. Denton says the new supply is weakening the ability of landlords to boost rents as much as they have in the past. That’s good news for tenants, but landlords may not be as excited.

By contrast, rents in Tacoma continue to soar. Check out the story we published on Tacoma’s hot market earlier this year. The average rate of growth for rent in the Tacoma metropolitanTacoma increased for the 11th straight month in September, climbing to $1,266, up 9.6 percent from the year before and far outpacing Seattle. Occupancy is also higher in Tacoma at 96.7 percent in September compared to 95.4 percent in the Seattle area.

Rents in both Seattle and Tacoma increased faster than the nation, where they grew by just 2.6 percent to $1,290 in September from the year before.