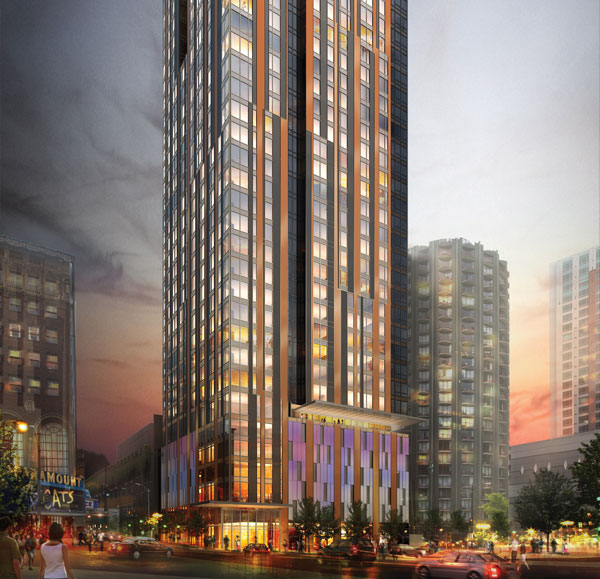 Seattle area real estate developers are making a $5.4-billion bet that the regions rental housing market will not outstrip demand over the next several years despite a 2013 apartment construction boom.

With an estimated 30,000 rental units in some phase of planning and development in the five-county region, as many as 9,000 new apartment units could crowd into the market in each of the next three to five years. If all of those projects are built, apartment production would be more than 10 times what it was as recently as 2011.

How financial backers and landlords are rewarded for this massive investment depends on whether their tenants stay put or feel compelled to buy single-family houses or condos before home prices and mortgage loan rates go up.

Few see the boom turning to bust anytime soon. Strong job growth in the Seattle area is drawing in new residents who are, in turn, adding to tens of thousands of new households being established in the region each year. However, most expect last years hot apartment market to cool a bit. Rent rates already flattened in the fourth quarter of 2012.

Tom Parsons, Pacific Northwest development manager for Holland Partners Group, sees the apartment project pipeline as too big to be easily absorbed. Were going to see a number of starts that people anticipated in 2013 that will be pushed, delayed or put on hold, he says. Capital is beginning to tap the brakes. Weve already seen some projects get delayed.

Tom Cain of the Seattle-based research firm Apartment Insights Washington expects downward pressure on rents and upward pressure on vacancy rates this year as more units comes on line. Its still a landlords market [with vacancy rates in the fourth quarter] at 4.75 percent, Cain says. But by years end we could see an increase in average vacancy rates to as much as 6 percent. Hopefully, there will be enough job growth related to Amazon, Boeing and others to help balance out production.

Investors still see Seattle as one of the best rental housing markets in the United States. Thats because job growth here is running at an annual rate of 2.7 percent as compared to 1.4 percent for the rest of the country. Last year, Puget Sound employers added 47,000 new jobs, lowering the King County unemployment rate to 6.1 percent in December. Thats well below the national jobless rate of 7.8 percent. Seattle-area population growth is also strong, adding new residents at a rate of 1.3 percent a year, far stronger than the national annual average of 0.8 percent.

These indicators are favorable for the housing industry in general, and particularly rental housing, as newcomers arrive.

Economist Dick Conway, who co-authors the monthly Puget Sound Economic Forecaster newsletter, says it is too early to tell whether the regions single-family and condo housing market could begin eating into apartments by attracting buyers, leaving landlords with a rental-unit glut.

Given that houses are more affordable today than anytime in the past 50 years, it will be interesting to see what happens if tight [mortgage] credit begins to loosen up, Conway says. If the kids can get a downpayment together, will that begin to empty out apartment buildings? Its hard to say.

Parsons believes demographic factors plus Seattles job growth have bolstered his companys confidence in the future. Based in Vancouver, Washington, Holland Partners is building projects in Seattle, Portland, Denver and Southern California. Six of those projects, with a total of 1,424 apartment units, are in the Seattle area, including 815 Pine Street, a 40-story, 386-unit high-rise in downtown Seattle.

Right now, 65 percent of newly formed households are going into rental housing, Parsons notes. We are assuming that at some point that number will decline to 50 percent as some renters become homebuyers. The fact is that weve got more than 70 million young Americans [nationwide], ages 16 to 30, who right now are entering the job world and creating households. Many of these people want to live in the urban core more than they want to own a home [in the suburbs]. Parsons thinks it will be a while before single-family housing here and elsewhere will make a dent in the rental housing industry. 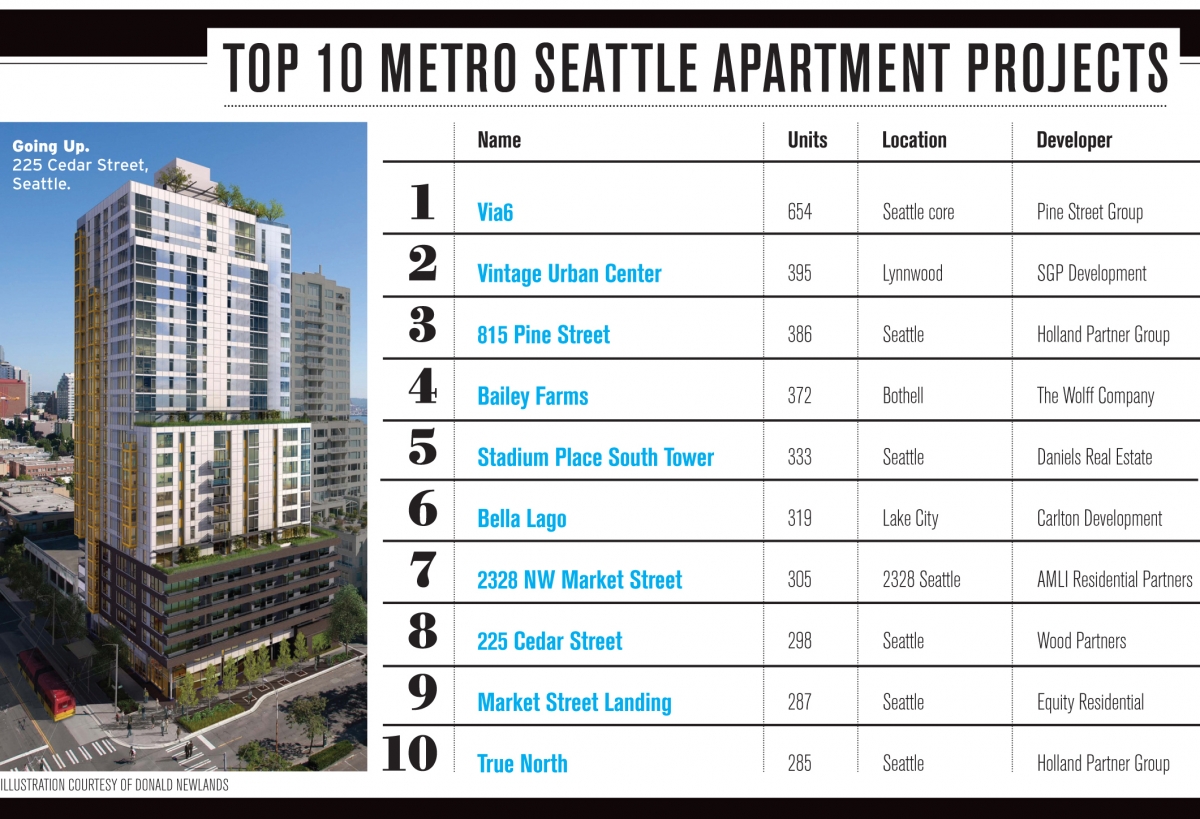 Developers first out of the ground, who lease up their units this year, will likely be the biggest investment winners. George Petrie, president and CEO of Goodman Real Estate Inc. in Seattle, sees the short-term rental housing market as still undersupplied and playing catch-up from the Great Recession when development nearly came to a halt.

Apartment construction declined from 6,459 units in 2009 to 3,271 units in 2010 before hitting bottom in 2011, when only 1,773 units were built as lenders went into deep-freeze survival mode. The industry saw a turnaround last year with 3,391 units coming on line.

We were among the first to pull the trigger [on new development] because we had cash on hand at the bottom and could buy foreclosed land at a discount, Petrie says. We think the market can absorb 4,000 to 8,000 units a year, if employers here continue to add 30,000 to 40,000 new jobs as they have been lately. We think were OK.

Goodman Real Estate is building 14 rental housing projects in the Puget Sound area this year. The portfolio includes the 93-unit Crossroads project in Edmonds and a 164-unit project in Kent. We will have 10 buildings completed that we will either keep or sell, Petrie notes.

Those projects are among 31,790 units in some stage of re-zone application, development or construction in the metro Seattle market of King and Snohomish counties, worth an estimated average of $181,838 per unit, or a total of about $5.4 billion. All of this wont be built, says analyst Cain, as some projects will fall by the wayside while supply catches up with demand.

Meanwhile, rental property values have been climbing as vacancy rates dropped to an average low of 4.75 percent in last years fourth quarter. Some submarkets, such as downtown Seattle and Capitol Hill, are even stronger, with vacancy rates as low as 3 percent.

With developers in mind, apartment investments are generating average capitalization rates of 4.5 percent to 5 percent on newer properties of 50 units or more, he says. Cain sees no permanent effect on the rental market from the Great Recession. There are people who want to rent, jobs being created and builders who want to build. It looks like a typical market, says Cain, who has tracked the rental industry for 30 years.

A vacancy rate around 5 percent still favors landlords, although some submarkets such as Bothell, Federal Way and the north Eastside are already seeing higher rates of 6.5 percent. By years end, average vacancies throughout the region could climb to 6 percent or more.

As more inventory comes on line, renters likely will benefit from a greater selection, slower rent increases and move-in incentives at some properties such as a one-month-free deal on a 12-month lease, Cain says.

In the long term, regional demographics favor developers, Conway asserts. His population analysis indicates that an estimated 22,000 to 23,000 new households are being formed annually in the Puget Sound region. Even if only half those households are renters, growing demand will balance out increasing supply, he says.

Tim Overland of Security Properties in Seattle is counting on that demand as his company moves ahead with construction of Angeline, a 193-unit project in Columbia City a few blocks from the Sound Transit light rail line. The project will include a 25,000-square-foot PCC Natural Markets store, all opening in 2014. Security Properties is partnering with the University of Washington and Seattle Childrens Hospital on a 184-unit affordable housing project in the University District. This project includes a workforce housing component. Completion is expected in late 2014 or early 2015, Overland says. Both are $50-million-plus projects.

Robust job growth is driving the optimism among developers. When you have new jobs at Boeing, Amazon, Costco and Microsoft, you get spinoff over time in secondary employment such as retailing and services, Overland says.

Mike Scott, a principal in Dupre + Scott Apartment Advisers in Seattle, also is positive for the long term. Net operating income from apartments, he says, will increase this year at a slower rate of about 3 percent. It could turn negative in 2014 and 2015, but start to grow again as new construction is absorbed.

Some may think the market is different this time, but really its never different, Scott says. Everyone wants to see things in perfect balance, but they never are.