Plans include splitting KeyArena into two music venues and a theater to complement proposed SoDo arena. 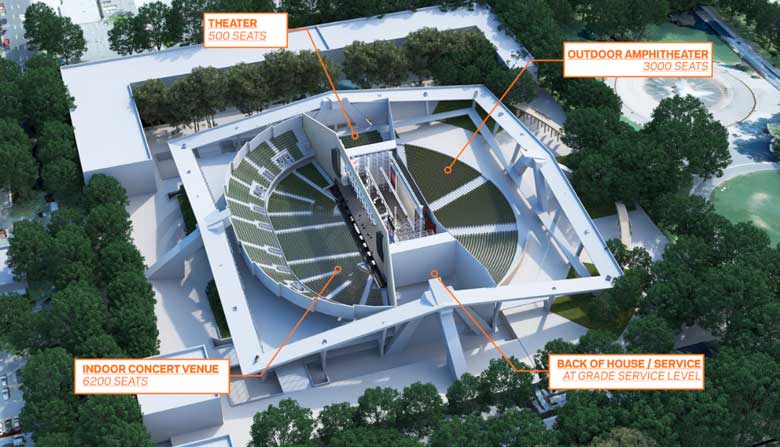 The investment group led by Chris Hansen is adding a new element to its plan for a new NBA/NHL arena in the SoDo neighborhood: redeveloping KeyArena in Lower Queen Anne to make it an indoor-outdoor concert venue.

The newly released Proposal to Redevelop KeyArena outlines plans that would effectively split the arena in half and create a 6,200-seat indoor concert venue and a 3,000-seat outdoor venue. It would also create a 500-seat theater and 500 permanent parking stalls by raising the arfloor.

The group is promising to privately finance the redevelopment that would create these venues.

Our group would cover all construction costs, ongoing capital improvement costs, and cost overruns, it said. We would not seek any public financing or public subsidies except for negotiating a mutually agreed upon long-term ground lease for the arena site. There should also be a short-term waiver of admissions taxes on the arena if an NHL or NBA team plays there as a temporary home during the construction of the SoDo Arena.

The proposal also emphasizes that it would complement the potential SoDo arena and address the citys need for a mid-size concert venue and amphitheater.

We believe the combination of a completely new and modern SoDo sports arena and the new Seattle Center Venues is vastly superior to a single, site-challenged sports venue at KeyArena, it said.

The group is also stressing that this is an offer to the City of Seattle not a demand.

We have always been committed to helping the City find a long-term solution for KeyArena, and under the old MOU had dedicated $7 million to help the city determine a long-term solution. Now, with the MOU expiring in December and the City evaluating a plan to develop KeyArena into a publicly subsidized sports arena, we felt compelled to offer an alternative solution that we believe better meets the needs of the City, the Seattle Center, the Lower Queen Anne neighborhood and prospective professional sports tenants, the proposal said.

See more of the KeyArena proposal from the Sonics Arena group here.

The city already is considering a proposal from the Los Angeles-based Oak View Group to remodel KeyArena into a priately financed venue suitable for NBA and NHL teams. If that plan moves forward, Hansen’s SoDo arena plan would likely wither. Hansen’s proposal today gives the city a new option for revitalizing KeyArena and Seattle Center while keepin alive Hansen’s plan for a SoDo arena.

Update: The Seattle Office of Economic Development (OED) issued a statement in response to the proposal, throwing some cold water on Hansen’s offer. It said:

“Oak View Groups proposal was the strongest of the two, so they were selected. If the SODO Arena Group was interested in redeveloping KeyArena, they should have submitted their proposal during the RFP process, which would have shown a willingness to work with the City on this project. They did not submit a proposal and continue to show no interest in working in partnership with the City.”

“We are well underway negotiating a Memorandum of Understanding (MOU) with Oak View Group, and plan to transmit the MOU to Seattle City Council shortly. We are excited about the future of the Seattle Center Arena and grateful private investors are committed to investing more than half a billion dollars in a venue designed to attract the NBA, NHL and outstanding music and entertainment.”