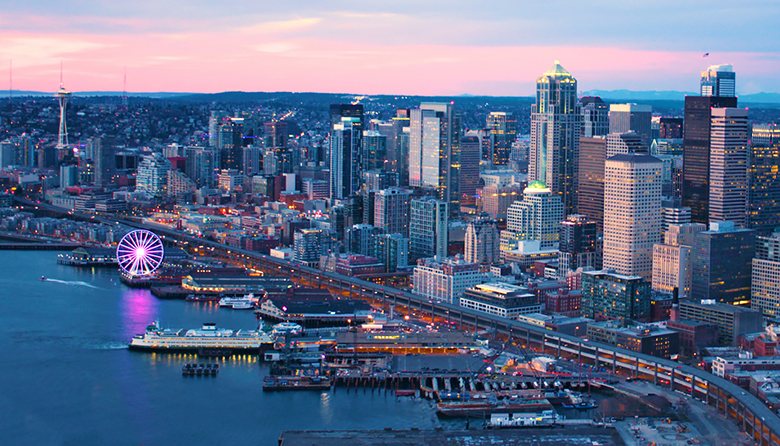 The year-end 2018 tally, outlined in a new report by the Downtown Seattle Association (DSA), includes some 6.4 million square feet of office space under construction; 3,780 residential units completed; and 2,102 new hotel rooms finished. In total, there are 227 downtown construction projects working their way through the pipeline, including the 66 under construction as of the end of 2018.

Including inventory under construction, there is currently nearly 15 million square feet of office space in the pipeline, the DSA report states. Now with more than 16,000 rooms [including 2,102 rooms finished in 2018], downtown has the most hotel capacity in the city of Seattle. With dozens of projects underway, this construction boom is contributing to a vibrant and dynamic economy.

On the housing front, 9,503 apartment units were added to downtown over the past two years, with more than 9,000 additional units scheduled to be ready for occupancy in 2019 and 2020. Roughly two-thirds of all new buildings under development downtown have a residential component, with apartments making up 91 percent of the new housing inventory, the report notes.

Condo development, particularly on the affordable side, however, has been slow to materialize downtown. The study also notes that because of the high cost of construction in Seattle, along with legal barriers that discourage condo development, new condominium units that do come online tend to sell for a higher price.

Over the past eight years, downtown accounted for 49 percent of the estimated value of construction permits issued in Seattle. In 2010, downtown represented less than one-third of that value.

In addition, since 2010, downtown has added more than 13 million square feet of office space, exceeding the entire square footage of downtown Bellevue. The demand for residential units downtown is being driven, in no small measure, by the South Lake Union and Denny Triangle neighborhoods, with each growing by more than 95 percent since 2010, according to the DSA report.

On another high note, the DSA report indicates that employment in downtown Seattle exceeded 300,000 jobs for the first time on record.