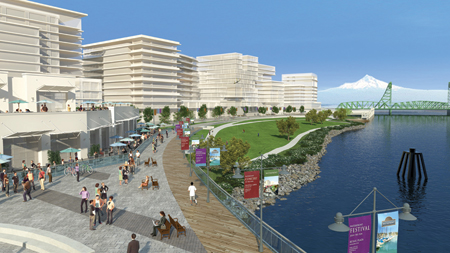 Despite high retail and office vacancy rates in the Portland-Vancouver metro area, developer Barry Cain is confident that the timing is right for new construction at a 32-acre site along Vancouvers Columbia River waterfront. Cains Gramor Development Inc. of Tualatin, Ore., in partnership with a group of private investors, envisions a mix of office, retail and residential buildings as well as a hotel, riverside esplanade and city park. When complete, the projects estimated value will be $1.3 billion.

The Gramor group purchased and cleared the property, once home to a Boise Cascade paper mill, downriver from the Interstate 5 bridge, several years ago. New street access and other infrastructure are to be in place by years end, with building construction slated for early 2013. Were just beginning to see banks thaw out, Cain says about what he sees as a positive lending environment. The first buildings will come online in about four years. That should be about right in terms of the [economic] upswing we see getting under way.

A leading contender to operate a waterfront hotel at the site is Spokane-based Red Lion Hotels Corp., which runs the nearby Red Lion Hotel at the Quay. That facility is targeted for demolition if a new bridge is constructed across the Columbia River between Portland and Vancouver. (Plans for the bridge are moving forward even as officials on both sides of the river debate design, costs and other issues.)

Currently, the city of Vancouver is overseeing $44.6 million in street work that will create access to the site under an elevated BNSF railroad line, which until now has separated Vancouvers business and residential district from the industrialized waterfront.

Cains confidence was buoyed this year after he found backing for three other Gramor projects in the metropolitan area: an east Vancouver Costco store with surrounding retail; a Beaverton, Ore., project anchored by a New Seasons food store and Cinetopia movie-restaurant complex; and a development in Wilsonville, Ore., anchored by a Fred Meyer store.

If a year ago banks were falling apart, life now is starting to return to normal for them, Cain says. Meanwhile, office vacancy rates in the Vancouver area hover near 18 percent and retail vacancies are more than 8 percent, according to a recent report from Norris, Beggs & Simpson, commercial real estate brokers in Portland.

Vancouver city leaders welcome the waterfront project for the roughly 2,500 permanent jobs and the $238 million in estimated state and local tax revenue it will generate during the next 20 years.