Big Changes Are in Store for Seattle’s Uptown Neighborhood

The growth of Seattles tech community is spilling into Uptown, changing its character and creating opportunities for development 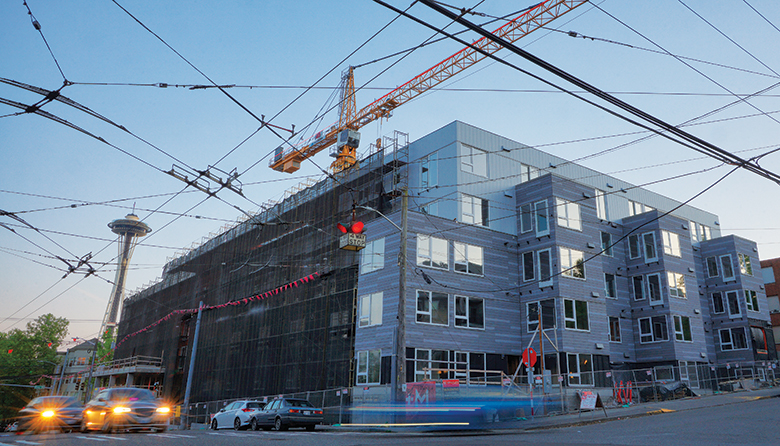 Oak View Groups KeyArena project generates all the headlines, but the surrounding Uptown neighborhood is undergoing a massive transformation that will change its character.

Once the $900 million and rising transformation of KeyArena at Seattle Center is finished in the summer of 2021, it will bring thousands of sports and music fans to the urban neighborhood, which is officially known as Uptown but is still commonly referred to as Lower Queen Anne.

At the same time, new neighborhood design guidelines are in the works that would raise building heights in the more commercial sections of Uptown to 85 feet to allow more multifamily-housing development. Already, the neighborhood is experiencing a spate of construction with 10 new development projects opening this year. They range from a clutch of apartment buildings to the $600 million first phase of Expedias new 40-acre campus in the Interbay neighborhood directly west. Other projects include a new consulate building for the Republic of Korea and the renovation of the Space Needle.

Theres also a growing awareness that the neighborhoods future is being shaped by the rapid growth in Seattles thriving tech mecca in adjacent neighborhoods South Lake Union and Denny Triangle.

Deborah Frausto, the KeyArena subcommittee chair for the Uptown Alliance, says the neighborhood is rapidly evolving and will increasingly continue to do so primarily because of its proximity to growing major employers.

Were getting more younger residents for sure. I never saw baby carriages before now, Frausto says. There are more people on bikes. A younger worker demographic is coming in.

In particular, Uptown is poised to benefit from the aggressive expansion of Google and Facebook in South Lake Union to the east and Expedias relocation, which will bring an estimated 3,500 employees to Interbay every day. A good portion of the thousands of incoming tech workers will be looking for places to live and things to do near work.

As a result, multifamily-housing developers are adding a significant number of new apartments in what is already one of Seattles densest neighborhoods. A tally on the Seattle in Progress website includes some two dozen multifamily projects totaling more than 2,600 new residential units. While not every project proposed will be built, the new developments will bring thousands of square feet of additional ground-floor retail space to the neighborhood. Additionally, there are plans for a new office building and a new hotel. More shelter beds also are in the works for the neighborhoods homeless population.

These new residents will not only support neighborhood bars and restaurants but also Uptown small service businesses, such as hair salons, dry cleaners, accountants and lawyers. NEIGHBORHOOD SEATING. The renovation of KeyArena, once completed in 2021, is expected to fuel more growth in Seattle’s Uptown neighborhood. Photo by Alex Crook

Lower Queen Anne is starting to change, says Matt Goyer, the founder and managing broker at Urban Living Seattle Real Estate. I think the employers will have a bigger impact than the arena. The arena is a nice bonus that will bring more energy and nightlife to the area.

Uptown is positioned to compete with other nearby neighborhoods, says Dean Jones, CEO and owner of Realogics Sothebys International Realty. Close to the Bill & Melinda Gates Foundation, Amazon and other tech companies, Uptown is a cosmopolitan neighborhood thats home to major arts organizations and 74 acres of open space within Seattle Center. Uptown also will benefit from the citys efforts to connect South Lake Union to the planned $2 billion redevelopment of Seattles central waterfront.

I have a lot of confidence in whats happening in the north end of downtown, Jones says.

Seattle developer Martin Selig has bet big on Uptown for years. Ive been building in that area for a long, long time, Selig says. It does not have the complications of downtown, provides a lot of parking and is a fun area.

Seligs company has 10 properties in Uptown, with plans for a six-story, 160,000-square-foot office building at 401 Queen Anne Ave. N, a block from the KeyArena site. The company is marketing the building by emphasizing Interstate 5 and State Route 99 access, its short walk to Seattle Center, its abundant local shops and restaurants, and a nearby 24-hour Safeway store.

Meanwhile, a new branding campaign will raise awareness of the neighborhoods status as a designated arts and cultural district with a deep bench of arts and entertainment options. A slew of performing arts groups call Seattle Center home, including the Pacific Northwest Ballet, the Seattle Opera and the Seattle Repertory Theater. Other cultural attractions include the Museum of Pop Culture, the Pacific Science Center, the Seattle Childrens Museum, and Chihuly Garden and Glass.

Not everyone, however, is happy about the redevelopment of KeyArena and the changes occurring in the neighborhood. Matthew Gardner, chief economist for Seattle-based Windermere Real Estate, is one of them. Gardner lives in Uptown.
He worries what traffic will be like when Seattle has hockey and, eventually, basketball teams playing at the refurbished stadium. Mercer Street is already a very tough drive, Gardner says, and it likely will get worse as thousands of Google, Facebook and Expedia employees join the mix.

While traffic and parking are a worry, there are some potential solutions. Theres interest in boosting usage of the monorail that runs between downtowns Westlake Center and Seattle Center. Improved passenger loading could potentially enable the monorail to ferry some 6,000 people an hour. Those headed to Uptown could park in one of the big parking garages downtown and then take an Uber or the monorail to Seattle Center. Eventually, the regional Link light rail system will have a station in the neighborhood as well.

Selig, for one, isnt worried about parking when there are events at the new arena. We have close to 2,000 stalls in the Lower Queen Anne area, Selig says. They are very seldom used at night and will be available for people to go to the arena.

Additionally, his new project will include extra parking for events at the arena, Selig says.