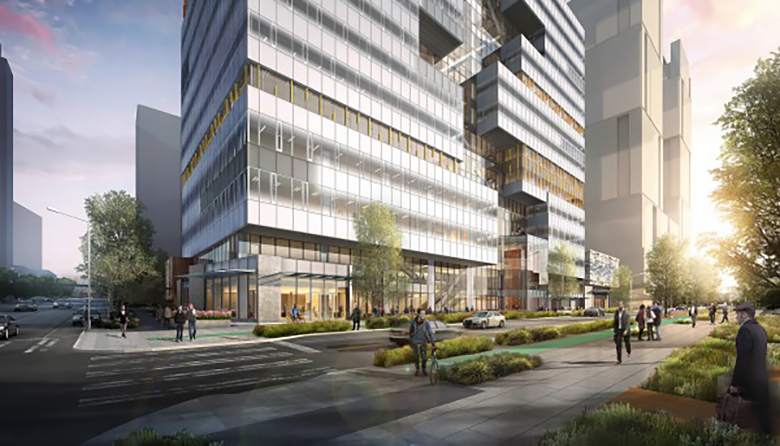 The value of office construction nationally climbed by a robust 18 percent in January, driven by large Amazon projects in Seattle and Boston as well as a couple other cities, according to the latest Dodge Data & Analytics construction-starts report.

The report cites online retailing giant Amazons groundbreaking on the $225 million Seaport Square office building in Boston and the $150 million Amazon Urban Treehouse office building in Seattle for helping to fuel the January construction numbers in the office sector.

The 525,000-square-foot, 17-story Amazon at Seaport Square building in Boston is expected to be home for up to 2,000 new tech workers the company plans to hire in the Boston area an expansion separate from its much-publicized HQ2 effort, according to a report in the Boston Business Journal, which adds that Amazon already employs some 3,500 people in Massachusetts. The new Amazon building will feature 15 floors of office space and two levels of retail and will be located in Bostons Seaport District. It is slated for completion in early 2021.

Amazons Urban Treehouse office building in downtown Seattles Denny Triangle neighborhood is a 17-story, 405,000-square-foot complex that will include 388,000 square feet of office space and 9,000 square feet of retail at street level, according to the Graphite Design Group, the architecture firm for the project. The new office building at 2205 7th Ave., according to City of Seattle records is slated for completion in 2020. The Denny Triangle neighborhood currently has the most office space under construction in the city, according to the Downtown Seattle Association.

After recording a 13 percent decline in December, nonresidential building nationwide was up a modest 1 percent in January, valued at $245.2 billion on an annualized basis, reflecting a stronger pace for [the] commercial-building segment, including large office projects in Reston [Virginia], Houston, Boston, Austin [Texas] and Seattle, Dodge reported.

On another front, residential building nationwide was up 4 percent in January, valued at $309.8 billion on an annualized basis, propelled by a surge in multifamily housing. That compares with a 9 percent declined in December.

In early 2019, there are several near-term positives for construction, Robert A. Murray, chief economist for Dodge Data & Analytic, adds. Interest rates have settled back from levels reached during last years fourth quarter, material prices appear to be rising more slowly, and the partial government shutdown was brought to a close.

Still, the way ahead for the construction market is far from a bed of roses as the benefits of tax reform and economic growth are expected to wane this year, Murray says.