City's home prices slipped in the past year, but the online giants' plans could reignite the market 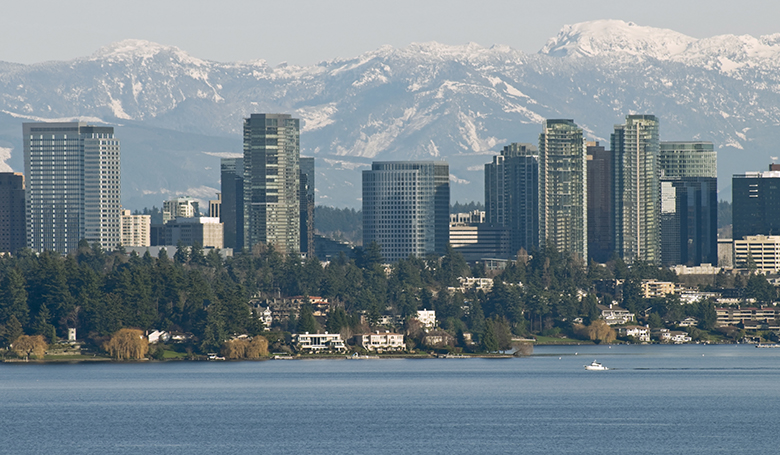 Theres a spotlight on Bellevues real estate market after Amazon gave up plans to occupy a skyscraper with the capacity for up to 5,000 employees in downtown Seattle. The move is intensifying speculation that Amazon will focus its hometown growth on the Eastside suburbs over the next few years.

Located across Lake Washington from Seattle, Bellevue is already a popular place for tech workers who are buying homes in the Seattle area, partly because Microsoft is headquartered in nearby Redmond. Local agents say Amazons growing footprint in the area, along with Facebooks coming locations, will ignite renewed interest from millennial homebuyers with high incomes, modern tastes and desire for a single-family home in a suburban area.

Amazon has already leased enough space in Bellevue to house nearly 7,000 employees and theres speculation that its in talks to lease space that could fit more than 25,000 workers when all is said and done. Facebook has signed leases for a total of nearly 700,000 square feet in Bellevue and 650,000 square feet in Redmond, which together could hold thousands of employees.

Weve always seen a lot of Amazon and Microsoft employees buying homes on the Eastside because of its suburban atmosphere and highly rated schools, said Redfin agent Kathi Kelly-Billings. But as Amazon builds out its presence in Bellevue over the next few years, I expect demand from young homebuyers to put pressure on the real estate market.

As employees from Amazon and other large tech companies move over to the Eastside, whether their job is moving to Bellevue or theyre planning to commute across the lake to work in South Lake Union, theyre creating a whole new cohort of buyers who are looking for something different in a home, Kelly-Billings continued. They dont want their parents or grandparents house. They want new, modern construction. Because Bellevue has such a scarcity of land, I expect well see a lot of teardowns in the coming years, replaced with modern, high-tech homes.

Another potential effect of high-paying jobs on the Eastside is double homeownership. Kelly-Billings said about half of her homebuying clients in Bellevue consider holding onto their existing property when they move up, especially if they bought before 2015 and theyve paid off a chunk of their mortgage. Most of her client base consists of couples who are both high earners in the tech field, and their incomes are enough to qualify for two mortgages. Rents have risen so much in the Seattle area that rent payments often cover their first mortgage, so it makes sense to hold onto properties, she said. Theyve seen firsthand how much home values can appreciate in just a few years, so many of my clients are hesitant to sell if they can afford to pay for two homes.

Bellevue is just across the lake from Seattle, though Bellevue, known as an affluent suburb with high-end homes, is more expensive: Compare Bellevues median sale price of $858,000 with $630,000 in the city of Seattle. Both cities experienced a real estate frenzy in 2017 and the first half of 2018, followed by a slowdown at the end of last year.

Prices in Seattle proper were up year over year every month from April 2012 through December 2018 before falling 10 percent in the first month of 2019. Prices in Bellevue, which fell 6.2 percent in January, have followed a similar trend, though the suburb has experienced a bit more fluctuation. In both cities, homes were flying off the market in the beginning of last year. In Bellevue, the typical home that sold in May 2018 had been on the market for just six days, compared to seven in Seattle. Since then, the number has risen in both cities, to 42 in Bellevue and 47 in Seattle for January 2019.

Supply is a similar story. Inventory dropped year over year throughout 2017 in both Bellevue and Seattle before starting to rise in the beginning of 2018. The extremely low inventory at the end of 2017 and beginning of 2018 created a real estate frenzy in Bellevue, said Kelly-Billings. But with the correction that has happened since then, buyers and sellers are both a bit nervous. Some sellers are waiting to put their homes on the market because prices have been stagnant, and buyers have been wary because they dont know where the market is going.

But Kelly-Billings said shes confident Bellevues housing market will remain robust, especially because of the number of high-paying jobs coming to Seattles eastern suburbs. The market is healthy and getting healthier, she said. Microsoft and Amazon are staying put, which helps create a real estate market on the Eastside that can withstand other fluctuating conditions.