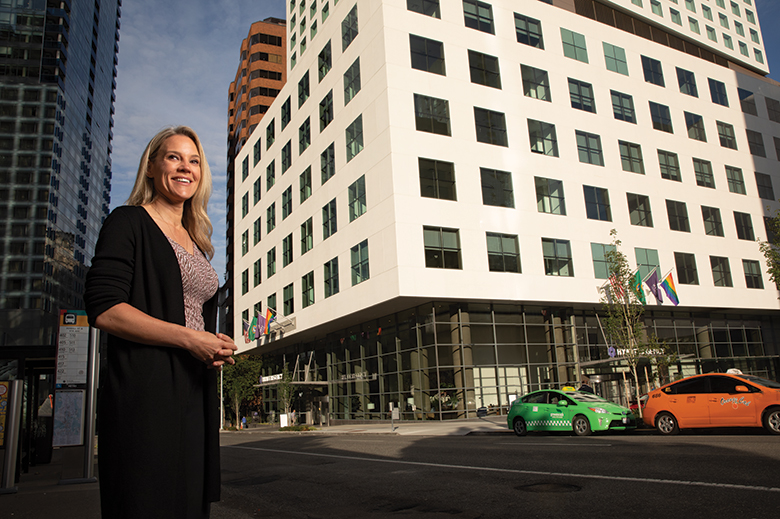 The latest addition to downtown Seattles hotel portfolio, as well as that of local developer R.C. Hedreen and operator Hyatt Regency, was a doozy a 45-story, 1,260-room hotel billed as the largest in the Pacific Northwest. Leveraging its location just two blocks from the existing Washington State Convention Center and adjacent to the planned convention-center expansion scheduled to open in 2022 the Hyatt Regency Seattle also has more than 103,000 square feet of meeting space, including multiple ballrooms and nearly four dozen meeting rooms. The timing of this hotel coming online is an extraordinary asset as we have recently felt the losses of several important annual conventions and conferences normally booked in Seattle, one of our judges noted. The hotel, which cost $470 million to build, has features that will capture the eyes of guests, including floor-to-ceiling windows in every room, 65-inch TV screens, and a lounge with fire pits and wraparound patio with city views. It also has some built-in features guests likely wont see that make for a better, more environmentally friendly building: a light-colored roof to reduce the urban heat-island effect, and a laundry system that captures heat and water after use to reduce the need for added energy to preheat incoming water.

With a prime location near Pioneer Square and the stadiums, the addition to Hiltons Embassy Suites brand is a two-tower project (owned by American Life) with 282 two-room and studio suites; the second tower includes a ballroom, an outdoor-event terrace, indoor pool and leased office space. One other feature: Its the new home of Seattles venerable restaurant 13 Coins. The project, one judge said, rounds out the residential development and redevelopment projects with hospitality and food and beverage in Pioneer Square. By reintroducing downtown businesses and professionals back to Pioneer Square, the success of this project should provide confidence to future development in this area, further strengthening the identity and popularity of Seattles oldest neighborhood.