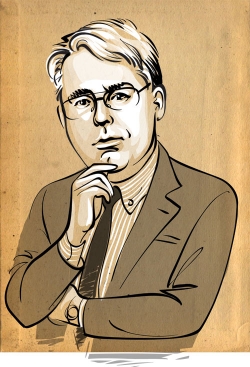 Novus ordo seclorum the new order of the age.

It says so right on our money, and in the conventional wisdom of technological progress.

When that new order
arrives, the old ways of doing things, like being ruled as a colony, are supposed to retreat into obsolescence and obscurity, sometimes gradually, other times quickly and with a forceful shove to the exits.

The marriage of the gasoline-powered internal combustion engine with something it could propel spelled the end of horse-drawn conveyances as practical personal and commercial transportation. But sometimes the old order doesnt putter off into its sunset. It lingers on when users of the particular product or service wont give it up because they find some continuing utility in it. Coexistence of the old and new ways may be more convenient for consumers, but its a more expensive proposition for providers of said product or service.
For illustration, we turn to a decidedly old-order delivery channel for financial services: the bank branch.

KeyBank recently announced it is closing its branch in Tacomas Hilltop area. The reasons seem straightforward: Key has another branch less than a mile away. And the Hilltop building is huge, nearly 10,000 square feet, which is gargantuan given that a bank has no inventory to sell or display. Key, which inherited the 1951 building in an acquisition, has recently built branches of 2,300 to 4,300 square feet. Also, use of that branch has fallen off dramatically: From 2012 to 2014, consumer deposits dropped by 25 percent, and consumer borrowing and small-business lending both slumped by 73 percent.

Those figures are in keeping with long-term trends in banking. The demise of branch banking has been predicted for decades, as the industry rolled out new technologies and delivery channels that gave customers the option of never having to set foot in a bricks-and-mortar bank building. Drive-in lanes. Banking by mail. Then by phone. Then online. Grocery store outlets. ATMs and their connecting networks. Direct deposit. Bill paying. Credit cards and electronic payment systems (further reducing the need for pocket cash). Loan applications handled remotely. Mobile-device banking.

The public eagerly adopted them all as each came along. Many banks trimmed their branch networks, and a few daring companies launched without any branches.

But a curious thing happened. The bank branch stubbornly held on, refusing to quietly fade away.

If you were to name the year of peak branching, youd likely guess far earlier than 2009. Between the aforementioned technology, mergers and consolidations, the trend line should have started downward well before that.

As it is, there are still more than 95,000 bank branches in the United States, an astounding number even with the size of this country. And even as some branches close, others open. Key has added locations elsewhere in the state and remodeled others. Nor is it just the burbs that are getting new branches. In the past year, HomeStreet Bank opened new locations in Seattles Ballard and Phinney Ridge neighborhoods.

Why spend money on a delivery channel that many customers never use once theyve opened the first account? Our clients and not just consumers have told us they want access to branches as well as other channels, says a KeyBank spokeswoman.

Some banks want to expand their presence into new markets, and branches are as much marketing tools as they are service delivery points. The challenge for banks is figuring out just how fast and completely the transition will occur, and how expensive it will be to maintain a presence in both worlds.

Obituaries have been written for landline telephones, email, laptop computers and cable TV. Will they become extinct or endure with shrunken market share?

The branch bank may yet disappear, but that day looks to be a long way off. You might get better odds on betting that physical money evaporates before the buildings intended to store and dispense it do.