Seattle Needs a Branding Boost on the Marketing Front

Seattle is many things to many people, and thats a problem 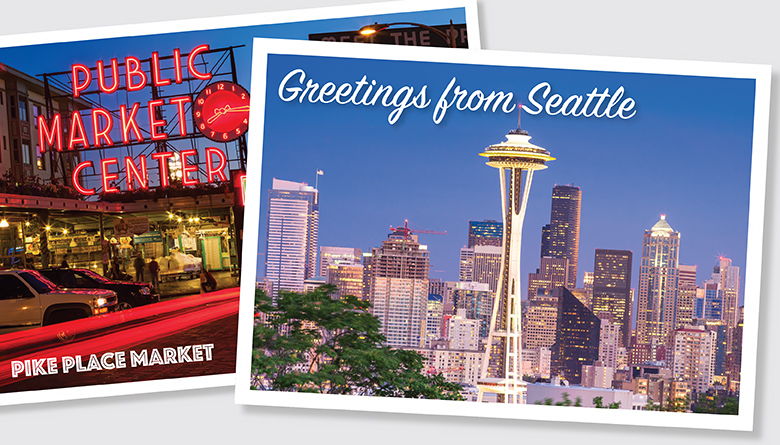 Mention Seattle to a stranger and you get a range of responses: Pike Place Fish Market. Starbucks. Amazon and Microsoft. Boeing. The Space Needle.

Seattle is many things to many people. While overall perceptions are positive, these responses have one thing in common: Theyre nouns, not adjectives. And thats a problem when it comes to Seattles brand.

The more things it tries to be, the less it is, says Dave Miller, founding partner and president of Seattle-based Stoke Strategy, a branding consultancy. Portland is weird. New Orleans is celebratory. Las Vegas is decadent. But what is Seattle? Our brand is healthy, but our city may need a firmer stake in the ground.

In other words, Seattle is branding itself with a dictionary. It needs a thriller instead.
Those impersonal perceptions are huge impediments to economic development and business recruitment. You want residents and corporations alike to feel proud to call that city home, says Jeff Richards, vice president of marketing and community engagement at the NFLs Seattle Seahawks. That can create a powerful synergy that benefits everyone involved and strengthens the city brand and grows its reach.

The study also set out to identify what specific signals Seattle is sending as it seeks to carve a distinct image. The conclusion? The city is viewed as having a positive, innovative business climate with countless strong attributes, but falls short on a key brand area: experience.

The survey found that 80 percent of nonresidents believe Seattle is a major business hub. Seventy percent think the city is a leader in tech. Seattle also is viewed as cutting edge: 71 percent say it pushes the boundaries of innovation and 74 percent say it inspires change.

On a more personal level, 86 percent say the region is beautiful and 74 percent view Seattle as an important center of culture. Seventy-six percent give it a thumbs-up for education and 76 percent for transportation.

Seattles area of weakness is on experience. Compared to the seven other cities, Seattle scores second-to-last on exciting, at just 22 percent and fun, 19 percent. Cities such as Las Vegas and New York build their brands on excitement and fun, and their economies reap the benefit.

Moreover, a paltry one-fourth of survey respondents said Seattle is inspiring and only 23 percent describe it as vibrant. Only 36 percent view the city as an enjoyable place to live or visit.

When it comes to image, Seattle does better comparatively but could also use some work: Only 33 percent of outsiders say Seattle is trendy and just 34 percent say its charming. To put this in perspective, Seattle scores about as well as New Orleans on trendiness but falls far behind New York and Los Angeles.

As businesses continue to set up shop in Seattle, quality talent is being tempted by promises of excellent employment in a beautiful city. But with only half of Americans agreeing that Seattle is a great place to live, it might take work to encourage them to put down roots here.
According to Richards, A city needs to have an identity that resonates with its residents in a way that engenders deep pride and makes them want to be known as from there.

Miller says technology has created creeping sameness across products and services, and that has extended to cities as well. City brands build businesses by creating meaning, and workers are increasingly hungry for connections. Today, what brands represent fosters a sense of personal relationship, he says, which excites commercial relationships. Buyers of products are becoming subscribers to values and ideals.

Values and ideals are generated through stories. Brian McGowan, the new CEO of nascent economic development agency Greater Seattle Partners, says the region has historically done a mediocre job of selling itself. Why do we not tell our story? I dont know, he says. I think what people here dont realize is that the country looks with admiration at this region.

Perhaps city and business leaders should look to cities that excel in brand experience: New York, Las Vegas and New Orleans. Even New Yorks and Las Vegas taglines evoke excitement. New Yorks The City That Never Sleeps. Las Vegas is just as iconic: What Happens in Vegas, Stays In Vegas.

And Seattle? The Emerald City. Sounds pretty, but not terribly riveting. Thankfully, Seattles brand rests on more than fishmongers or coffee. But whats our story?

While Seattle doesnt have the Strip, Broadway, or Mardi Gras, it can still carve its own space by encouraging, supporting and promoting unique Seattle experiences to help shape our national image and our brand. It may come down to focus.

As a community we have so much to offer: geography, industry, culture, history. Miller says. But typically, a brands strength is inverse to its scope.

Maybe Seattles brand identity is uniquely titillating and buried somewhere in its history, waiting to be rediscovered.