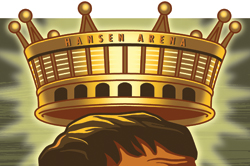 Welcome to the dark months. This is what Mick McHugh calls the period between the end of one baseball season in late September and the beginning of the next one in early April.

McHugh owns F.X. McRorys Steak, Chop & Oyster House, which debuted in Pioneer Square in 1977, the same year the Seattle Mariners were born. If youre a diehard Seattle sports junkie, youve probably quaffed or noshed at McRorys at least once. If you have visited during the dark months, it was probably on a day when the Seattle Seahawks were playing football.

There are only eight Seahawks home games each NFL season, so the dark monthsOctober through Marchare a challenge for establishments like McRorys that rely on the sports-obsessed public for much of their income. Basketball and hockey are played during the dark months, which is why McHugh probably thinks Chris Hansen is a heavenly combination of messiah, mensch and Merlin.

Hansen is the rich guy from San Francisco who wants to put a basketball/hockey arena near the existing football and baseball stadiums in Seattle. He has spent more than $50 million buying up property nearby. In a recent blog post, McHugh described Hansens arena as having the potential to … make a difference in the lives of not only the business owners in the area … but the staff we will be able to keep on during those quiet times and the additional people we will have to hire.

In sporting circles, Hansen has already had his halo fitting. His canonization is likely on the fast track because anyone who can bring professional basketball back to Seattleand maybe a hockey team, toowhile footing much of the bill for a new arena is destined to be seated at the right hand of Oprah come Judgment Day.

But on the day in September that Seattle was celebrating the City Councils tentative agreement over the financing of Hansen Arena, I was moderating a panel discussion about the outlook for the Washington state economy in 2013. Susan Sigl, CEO of the Washington Technology Industry Association, mentioned that our economic future is inexorably linked to our ability to close the high-tech education gapthe yawning chasm between the huge number of available tech jobs in Washington and the small number of graduates qualified to fill them.

Its an oft-heard refrain, but if we dont improve education in the so-called STEM disciplines (science, technology, engineering and mathematics), it doesnt really matter if we get a shiny new version of the Seattle Sonics to play in a shiny new arena. Without a successful economy firing on all cylinders, adding one or two more teams to the professional sports landscape is like putting gas in a car whose fuel tank has a hole in it.

And so as I moderated the discussion, I began to wonder: Wouldnt it be cool if somebody like Chris Hansen, a zillionaire who grew up in Seattle loving the Sonics and who wants to give back to the community he loves, were willing to pony up about $300 million to kick-start a first-class effort to close the tech education gap?

Look, I love sports. But sports is entertainment. It can boost civic identity to a point, but its not as if a city lives or dies according to the number of millionaire athletes its willing to coddle. Trust me. The city of Seattle and the state of Washington will survive without a pro basketball team. But without enough highly qualified tech graduates to stoke our economic engine, Mick McHughs dark months could become an all-year proposition.

JOHN LEVESQUE is the managing editor of Seattle Business magazine.