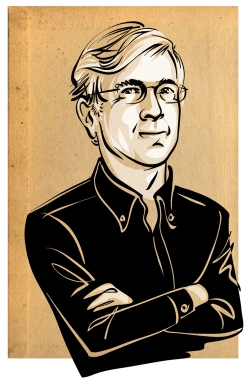 On a brisk seattle morning, a couple dozen of us meet at Seattle Parks and Recreations Denny Park headquarters for a Civic Boot Camp. The goal is to prepare us for civic engagement, says Diane Douglas, executive director of Seattle CityClub and a 2014 honoree in the Community Impact Awards (see page 31 for the class of 2015).

The focus this day will be on South Lake Union, one of the fastest growing neighborhoods in the country and one heavily
affected by rising rents and homelessness. Among the boot camp attendees are retired physicians, wealth managers and community activists. Notably absent are employees of the many technology companies now dotting the neighborhoods landscape. Thats too bad. They have much to contribute, yet it seems they rarely get involved.

Eugenia Woo, director of preservation services at Historic Seattle, begins with a short history of South Lake Union. She explains Lake Union was called Little Lake by the original inhabitants. Westerners arrived in the 1850s and established farms, brick-making operations and sawmills. Seattle annexed the area in 1880 and put in streetcar lines. In the 1900s came commercial steam laundry firms, which sent horse-drawn carriages to hotels, hospitals and residences to pick up mountains of laundry that would be cleaned, starched and pressed.

The 1920s brought the auto age. Streetcar lines disappeared and auto dealerships flourished. By the late 1950s, Interstate 5 created a massive concrete barrier along South Lake Unions eastern edge, cutting it off from Capitol Hill. Decades later, the city rezoned the area as a manufacturing district. More recently, regulations changed yet again to encourage the development of high-rise apartment buildings and office towers to accommodate a booming tech sector. A new streetcar line was extended to downtown.

The boot camps walking tour that comes next gives us a glimpse of South Lake Union today. We see Vulcan Real Estates loving refurbishment of the Terry Avenue Building, built in 1915 to house the Kuhn Tractor Truck Co., as well as less inspiring examples of preservation in which only the facades of beautiful buildings are preserved. We visit an active P-Patch garden where locals tend to vegetables as homeless people sleep on benches nearby. We pass a center for drug and alcohol treatment and take a tour of a well-appointed facility built by Plymouth Housing Group that offers free housing to the homeless.

Lunch is in the basement of a Lutheran church built in 1890. Its congregation, once dormant, is growing again and the building now hosts a food bank. Locals recall a neighborhood that once smelled of chlorine from the laundry facilities and a time when the area was populated mainly by dilapidated boxcars. We hear from expert panels on how nonprofits are addressing issues such as affordable housing and how local organizations can apply for matching grants the city offers to help build community and improve neighborhoods.

By days end, we learn why and how we and the new residents who are pouring into South Lake Union and the rest of Seattle can and should play active roles in our neighborhoods. Only then can Seattle maintain its special identity as a place that cares about its past and its future a city that wants to preserve the human touch even as it evolves into a major metropolis.