Sub Pop Turns 30: How the Unconventional Record Company Put Seattle on the Map

Microsoft, Starbucks and Amazon helped put Seattle on the map in the 1990s, but a record label with a penchant for irreverence and a knack for subversive marketing had a lot to do with it, too. 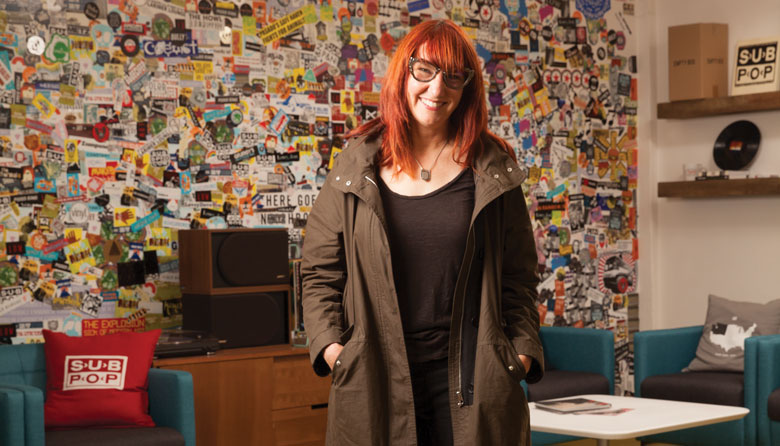 Sub Pop Records, the iconic Seattle music label that started a rock n roll revolution three decades ago with the launch of Northwest bands Soundgarden, Mudhoney and Nirvana, thrives in a challenging and ever-changing marketplace that has seen the demise of labels far less nimble.

The music industry in 2018 is more transitional than its ever been, says Jonathan Poneman, the labels co-owner and longest-serving current employee. We know where it came from. But where its going is happening with the speed of technological change, which seems to quicken with every passing year. Markets open, others close. I dont know if its luck or savvy or a combination of both, but weve been able to benefit from the changes and generally welcome them.

Digital formats such as streaming have become extremely important as older music formats, such as CDs, became less viable. Streaming technology changes constantly, but it allows labels to get music to listeners more quickly and efficiently.

The digital music services are key to our being able to thrive in the present climate, Poneman acknowledges, like being able to withstand the loss of revenue from physical platforms that are diminishing. Still, one platform that is not diminishing is vinyl. What we are seeing is a continual spiking in sales, Poneman says, and while there are things to consider, like inventory management and the pressure on the pressing plants, a lot of these companies that were struggling to survive 10 years ago are now struggling to keep up with demand.

Celebrating its 30th anniversary with a series of events this month, Sub Pop was founded in 1988 by Poneman and Bruce Pavitt, who had been editor of a fanzine called Subterranean Pop at The Evergreen State College. Poneman, a DJ at KCMU (now KEXP), provided money to release Soundgardens first album. They became evangelists for underground or subterranean music, hence the name Sub Pop.

One of the more captivating musical styles at the time was grunge, a subgenre of alternative rock and punk featuring distorted guitars, howling vocals, dark lyrics and scruffy attire (Nirvanas Kurt Cobain helped popularize jeans ripped at the knee).

Seeking a boost from the alternative press, Sub Pop invited Melody Maker critic Everett True to experience and write about the Seattle scene. His stories in Great Britain, where passion for gritty rock n roll ran high, helped pique interest in a music scene far from the established rock capitals. They also gave Seattle a reputation as a hip place and helped attract young people to the city and drive the regions growth.

With Soundgarden, Mudhoney and particularly Nirvana, Sub Pop introduced grunge to the masses, aided by major label DGC/Geffen Records and MTV. When Nirvana jumped to DGC/Geffen, which released the bands sophomore album Nevermind in 1991, Sub Pop received a percentage of the sales a lucrative source of new revenue. MTV then made the bold decision to put the albums debut single, Smells Like Teen Spirit, into regular rotation on the cable channel.
The result was explosive, saving Sub Pop from possible bankruptcy. Viewers loved the songs anarchistic video, filmed in a dingy, smoke-filled gymnasium, and powerful hooks. Unlike many punk songs of the era, it was catchy and tuneful despite raucous instrumentation and ragged vocals. By January 1992, Nevermind had reached the top of the national charts, knocking Michael Jackson from No. 1, an achievement greeted with euphoria on the Seattle music scene. Never had a Seattle band gone so far so fast. At the time, Pavitt likened it to the Mariners going to the World Series.

To date, Nevermind has sold more than 30 million copies. Grunge let the indie label establish a singular identity and put Seattle on the international rock map, turning the city into a music mecca, displacing the prevailing arena rock styles and leaving executives at major record labels in awe.

Feisty and irreverent, Sub Pop promoted itself with its signature Loser T-shirt, sold records through a Single of the Month Club and poked fun at the status quo. In 1992, Megan Jasper, now the labels CEO, famously tricked a reporter for The New York Times into publishing her lexicon of grunge, which she made up on the spur of the moment. Among her invented phrases were wack slacks for ripped jeans and swingin on the flippity-flop for hanging out. Sub Pops rejection letter to artists in the 1990s was characteristically snarky, too. Dear Loser, it began.

Despite reversals, cash-flow issues and near-bankruptcy, Sub Pop has successfully navigated the music industrys turbulence. In 1995, Sub Pop sold a 49 percent stake to Warner Music Group for $20 million, dramatically improving Sub Pops fortunes. Pavitt, unhappy with the corporate atmosphere, later decided to leave and today operates a startup label, 8Stem, which allows listeners to remix and share music. He remains an ally of Sub Pop, however.

Hes been a close friend and advocate and adviser, Poneman says, but never in an official capacity.

Diagnosed with Parkinsons about five years ago, Poneman keeps his focus on the big picture. Ive got people here whove been working closely with each other and with me for a number of years, Poneman says. The thing that Im very reliant on, but also very proud of at Sub Pop, is our ability to work collectively. Im not autocratic.”

Tony brings an expertise in A&R, good instincts about hard business, and hes got the trust of his coworkers and the artists, Poneman says. Hes a talented cat.

Sub Pop has always taken innovative approaches to the business of selling music. A few years ago, it opened a high-profile store at Sea-Tac Airport. Its been a major boon to our global recognition, says Poneman, delighting in the knowledge that airline passengers from all around the world are returning home with the labels Loser T-shirts.

When grunge went out of fashion, it was the alternative rock band Afghan Whigs (from Cincinnati, not Seattle) that led Sub Pop to a more diverse stable. Today, the label features a surprisingly varied corps of critically acclaimed artists, from ethereal pop duo Beach House to beloved Seattle pianist Walt Wagner, who performed at Canlis Restaurant for 20 years. The label has even embraced comedy, releasing the music from the Fox sitcom, Bobs Burgers.

Sub Pops past and present artists includes The Shins, Beach House, The Postal Service, Flight of the Conchords, Father John Misty, Iron & Wine, Shabazz Palaces and Fleet Foxes, all of which received great press. The labels newest artist, Yuno, creates genre-defying music (while also doing his own press photos, designing his album art and directing his music videos). He was discovered via Soundcloud by Ishmael Butler (of Shabazz Palaces and Digable Planets), who is a member of Sub Pops A&R (artist and repertoire) team.

Another Sub Pop hallmark is supporting charitable causes, including raising money for the Northwest Parkinsons Foundation and furthering the education of arts-enthused misfits through its annual Sub Pop Loser Scholarship.

Poneman is especially excited about raising money and awareness for YouthCare, one of the first organizations to serve runaway and homeless young people on the West Coast when it was founded in 1974.

Charitable giving is a big part of why we do what we do, Poneman says. It allows us to let our values dictate where we are going.