Mayor Sly James is reviewing Amazon products and tweeting about it as part of the city's creative pitch to get in the mix for HQ2. 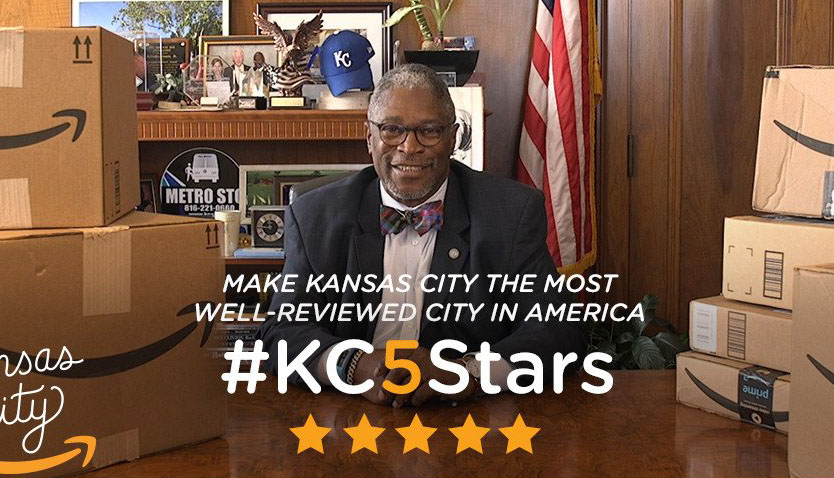 With the proposal deadline a mere week away, cities all over the continent are lining up their pitches to be the next home for Amazons HQ2.

Weve already seen some ideas to get Amazons attention that have been pretty, um… creative. Tucson, Arizona, sent a 21-foot saguaro cactus. Georgia city Stonecrest is offering to change its official name to Amazon. Birmingham, Alabama, created a goofy Twitter bot. Carls Jr. weirdly campaigned for Amazon to buy the restaurant chain, but that might not have a connection to HQ2 (or reality).

Hes also getting the community into the effort by having them post their reasons for KC to be home to HQ2 with the hastag #KC5Stars.

Mayor James’ office explained the HQ2 push in a press release. See below:

Kansas City Metro Area (October 11, 2017) Online retail giant, Amazon, is currently looking for the ideal city to set up its second headquarters and Kansas City has found a way to use Amazons own product reviews to make its case. Mayor Sly James, known for his social media savvy, recently purchased 1,000 items on Amazon.com. But heres the kicker: within each product review, Mayor James tells Kansas Citys story, using a stat, fact or story about his city.

Its no secret we believe Amazon is a great fit for Kansas City, said Mayor James. So the idea was easy make Kansas City the most-well reviewed city on Amazon.

On Wednesday, Mayor James tweeted out his reviews and released a series of videos covering his favorite products and points about Kansas City. In one, he reviews wind chimes and ties in Kansas Citys affordable housing costs:

When it comes to my house and my housewares, theres nothing I value more than bang for my buck. I live in beautiful Kansas City where the average home price is just $122K, so I know luxe living doesnt have to cost a ton. Thats why at $14.99, these wind chimes are music to my ears. They have a soothing timbre, a stylish look, a durable aluminum construction, and they catch the wind just as beautifully as far more expensive models. Ill tell you, when Im sitting out in the backyard of my reasonably priced home in a safe neighborhood with great schools and these chimes start to tinkle, it feels like the whole world is singing just for me.

In other reviews, Mayor James turns an earnest analysis of a label maker into a story about Kansas Citys highly-educated workforce, a detailed look at a car stereo bluetooth adapter into an ode to Kansas Citys open infrastructure and short commute times and even transitioned a FiberOne Cereal review into a look at the nations leading fiber internet hub.

Putting our three key strengths our thriving entrepreneurial culture, our highly-educated workforce and our award-winning quality of life into a bulleted list might not work, but putting them in a review, now thats what people trust, said Mayor James.

If this helps us get in the finals of Amazon HQ2, thats great, said Mayor James. If not, well still be proud of this citys future, and a few of us will be a wind chime or two richer.