Now in its 10th year, Fremont Brewing Company strives to be known for good products and good intentions. 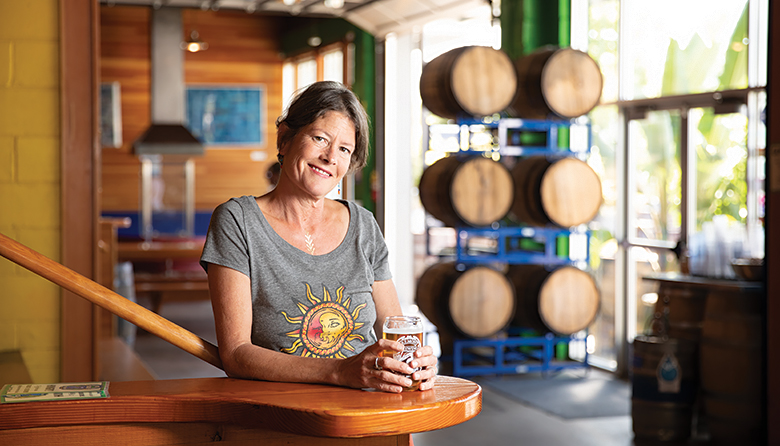 When Sara Nelson and Matt Lincecum launched Fremont Brewing Company in 2009, their endeavor was about more than making good beer. The married couple wanted to be good stewards of their community. And their planet.

Less than a decade later, Nelson and Lincecum operate the third-largest craft brewery in Washington state. Second-largest, if youre counting independent brewers exclusively.

Besides Washington, Fremont Brewing distributes in Alaska, Oregon, Idaho, California and Colorado. With that privilege comes a responsibility to promote the values that are core to our company and to translate those values into policy, says Nelson, who handles everything from environmental issues to government relations.

Right from the gate, Fremont rented space to Blue Marble Energy (now Blue Marble Biomaterials), which used the spent grain from brewing operations to make high-grade food flavorings as well as methane. When Blue Marble moved to Montana in 2011 to focus on methane production, Nelson arranged to ship the 10,000 pounds of spent grain it produces every day to a farm for livestock feed, an approach other brewers have since emulated.

Its a good solution, Nelson says, but shipping the spent grain elsewhere still creates a lot of carbon emissions. She would like to focus on green technology, such as anaerobic digesters, which can process both the spent grain and the brewerys wastewater and generate energy on site. In 2016, Fremont Brewings Ballard location became a pilot site for Impact Bioenergy, a Shoreline-based startup that uses solid waste to produce biofertilizer and electricity. The effort won Fremont Brewing a Sustainability Leadership Award from Sustainable Seattle last year.

Environmentalism has garnered Fremont Brewing a lot of media attention, but its the beer that has kept beer fans coming back. Just three years after launching, Fremonts Cowiche Canyon Fresh Hop Ale, produced with hops from a single farm in the Yakima Valley, won first place at the Fresh Hop Ale Festival. By the end of 2013, the company already needed more room. In 2015, Nelson and Lincecum borrowed $8 million to move into an 80,000-square-foot facility in Ballard. With the added capacity, Fremont Brewing expanded production to 44,000 barrels last year, up from about 19,000 in 2014.

Seattles location near good water and Yakima, where 75 percent of the nations hops are grown, raises the quality of local craft brewing. Nelson was active in launching the Cascadia Grains Conference, a partnership of Washington State University, Oregon State University and farmers in the Skagit Valley to grow a larger variety of local grains, including heirloom strains of barley.

What were trying to do, Nelson says, is revitalize the grain economy west of the Cascades.

Before Prohibition, barley and other grains were grown widely in Kent and in the Skagit Valley, but their production dropped when alcoholic beverages were banned. Specialty grains provide farmers with more options for cash crops and give craft brewers more ingredients to come up with innovative new beers. One example is Fremonts Wandering Wheat unfiltered ale, which uses specialty malt and wheat from the Skagit Valley to create a beer that won gold at the Washington Beer Awards twice in the past five years.

Lincecum was a home brewer before starting Fremont Brewing, and most craft brewers begin with a passion for testing and experimentation that persists as they grow. The company has a lab team of four scientists and a sensory/tasting program to keep the beer consistent. Barrel-aged beer is an area in which Fremont has had great success it has one of the largest barrel-aging programs on the West Coast and its limited releases often sell out quickly. Its popular Cowiche Canyon ale exemplifies the firms triple-bottom-line philosophy: It is Washingtons first certified salmon safe beer, meaning the farmer growing the hops works to protect waterways that support native salmon; proceeds benefit the Cowiche Canyon Conservancy; and Fremonts commitment to buy the hop harvest each year gives farmers the freedom to experiment and test new varieties and growing methods for all-organic hops without risking their livelihood.

The popularity of its beer means the company has had to be thoughtful about growth. Meeting demand while preserving product quality is a priority, Nelson says, and a reason the company has avoided growing too rapidly.

One of the keys to Fremonts success is that we have always invested in the science part of our business, she notes.

The brewery has three full-time employees who work on quality control, and a lab for testing every batch of beer that goes out the door. It only takes a couple of bad batches to give us a bad reputation, Nelson explains. Nelson serves on the government relations committee of the Brewers Association, the national trade organization for craft beer makers brewers producing fewer than six million barrels a year. Craft brewing isnt new to the area; brewers like Hales and Redhook have been around since the early 80s.

But Seattle and the Puget Sound region are at the forefront of a boom. Washington state, with 386 craft breweries, is second only to California among states with the most craft breweries. The industry contributes more than $1.7 billion to the state economy.

All that growth could mean tough times ahead for regional breweries. Beer consumption has stayed fairly flat for the past five years, according to Nielsen, the data analytics firm. And while craft beers market share has grown, competition has intensified.

Regional craft breweries those producing more than 15,000 barrels annually are in a precarious situation, says Chris Furnari, editor of the industry publication Brewbound. Regional breweries are often stuck in the middle, squeezed by larger, more resourced breweries including big beer and their acquired brands and the hyperlocal, taproom-focused operations that rely on scarcity and preach a buy it now, drink it fresh mentality.

Lincecum isnt particularly worried. We are the second-fastest-growing regional brewery in the country, he says, and are just fine with our 45 percent growth rate last year and around 25 percent growth this year. We are trying to limit our growth due to the extreme capital cost of 45-percent-growth years.

Nelson, who has long worked with the Washington Brewers Guild, which represents craft brewers at the Legislature in Olympia, is fighting efforts by beer giants to acquire craft breweries and distributors and use that dominance to elbow out smaller producers. For example, Anheuser-Busch InBev (ABI) introduced an incentive program in 2015 that paid distributors on a sliding scale based on the share of ABI beers they sold. ABI was forced to terminate the program after an antitrust review of its acquisition of its biggest rival, SABMiller PLC.

Its harder and harder for craft breweries to be distributed by independent distributors, Nelson asserts. What ends up happening is that the ABI-affiliated distributors have the power to keep craft beer off tap lists and store shelves.
Nelson sees solutions in state and local regulations that support small brewers. Preserving the right to self-distribute, something Washington allows but some states do not, is crucial, she says. This approach allows small breweries just starting up to market their beer themselves, establishing a record of successful sales that can secure them a spot with a distributor.

Lincecum and Nelson see their local community as an important base of support. We have never sought to be the brewery of the hour, day, month or year, Lincecum says. We built and continue to run Fremont as a long-term family business rooted in the industrial culture of Fremont and Ballard.

Apropos of that sense of community, other brewers lent equipment and expertise when the couple were starting out. The beer-drinking community also helped. When the economy crashed not long after Fremont Brewing launched, the companys beer garden helped get it through the tough times. Craft brewers are now seen as place makers, Nelson observes. Its fun to be Fremonts front porch, in a way.

Nelson ran unsuccessfully for the Seattle City Council in 2017 in part to bring a business voice to the table. Before we started a business, I used to say that if youre not smart enough for academia or good-hearted enough for public service or philanthropy, then you go into business to make a bunch of money and dont come crying to me about taxes and regulations and all these things, she quips.

Opening her own business changed her perspective. Now, shes working with the Brewers Association to keep federal excise taxes low for craft breweries, and at the state and city levels she has advocated incentive programs that support small businesses trying to meet ambitious environmental goals.

Nelson envisions a future in which the industry can grow and bring more beer to grocery stores where choices are limited. There really is creative ferment in Washington and in the craft beer community in general, she says, unconcerned about the prospect of more competition. We all have our different niches.

Last year, it gave away some 20,000 pound of pretzels pretzels that come in boxes containing three separate bags. Thats plastic and cardboard from far away, says Nelson. I want a local pretzel maker that wont package their stuff. Every single decision makes a difference.

Lincecum adds: High-quality beer is not the only measure we use to determine success. We also measure ourselves by how we treat our employees and our community. [But] at the end of the day, when you only make and sell one thing craft beer it better be the best damn craft beer you can possibly imagine.