Mark Okerstrom updates the timeline for the company's planned move from Bellevue to the former Amgen campus overlooking Elliott Bay in Seattle. 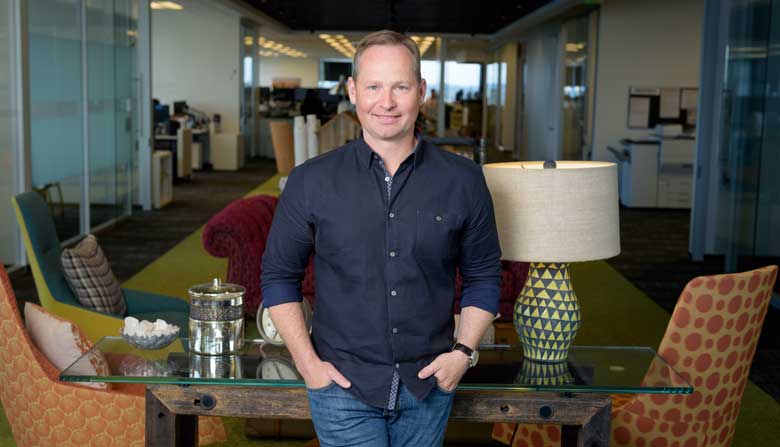 Editor’s Note: Read a longer version of this interview with Mark Okerstrom that was published in the December 2017 issue of Seattle Business magazine.

The goalposts for Expedias move from Bellevue to Seattle have now shifted several times, but plans could be clearing up, according to its new chief executive officer.

The worlds largest online travel business first announced its plans to move its headquarters from Bellevue to the former Amgen campus overlooking Elliott Bay, purchasing the property for $228.9 million. Then came splashy new designs for the 40-acre site. But about two years after the initial announcement, the company announced a new approach and a new project team.

Now, Expedia has a new CEO — Mark Okerstrom, who moves into the companys top leadership position after 11 years moving up the ranks, most recently holding the positions of chief financial officer and executive vice president of operations.

Okerstrom was close with former Expedia CEO, Dara Khosrowshahi, who recently became the CEO of Uber, so a drastic leadership change this is not. But it is a new start, and there will be some differences between his and Khosrowshahis leadership approach, and Okerstrom will pilot the ship as the company moves to its new home.

Because the CEO of Expedia used to be the CFO of Expedia, were going to be responsible financially, and make sure that we [make the move] in a pragmatic way, which is Expedia culture, he said. We dont like to be flashy. We want to have an environment thats going to be amazing for our employees, but were going to do it in a responsible way.

In an interview with Seattle Business at his Bellevue office, Okerstrom detailed whats to come with Expedias move.

We are pretty close to being final on just the design of the exterior structures, building structures, he said. We are working very closely with our landscape architects to get final on the property itself. Its 40 acres — you imagine theres a lot of landscaping to figure out. He says Expedia expects to start construction in early 2018 and begin moving into the new headquarters at the end of 2019. I expect well be probably completely done in the beginning-to-mid part of 2020. Might be some final shrubs to plant through 2020. The bulk of the move is going to happen (in 2020).

Not to give too much away, but we want to embrace Seattle as part of this. I think there will be opportunity for us to enhance some of the public spaces and hopefully make that whole area just a little bit more accessible and pleasant for the people of Seattle.

The new plans, with new architects ZGF and landscape architects Surface Design, will employ a little bit more of a modular approach to how we build things out, said Okerstrom.

This will, of course, be a change for Expedias employees and will significantly impact the commute for many. By 2020, when the move is scheduled to happen, more than 5,000 people could be working for the company, said Okerstrom.

Were going to do our best to make this a seamless transition, he said. It will be difficult for some folks. Well be doing a few things. Okerstrom says there will be shuttles that allow employees to commute with access to wi fi so they can do their first couple of calls from an air conditioned place thats highly comfortable and avoid the stress of traffic.

Okerstrom says its still unclear what Expedias Bellevue office will look like after the move. One of the ideas were thinking about is having essentially bookable space so employees will be able to book into the Bellevue office for certain days depending on what role theyre in. We havent yet decided if there will be specific groups that’ll stay behind; I suspect not. He says the company is developing the approach in close consultation with employees.

Okerstrom added that Expedia has already opened a smaller office in the Elliott Bay area, about two blocks from the new headquarters, where about 300 people are currently employed and are beginning to navigate the companys new life in Seattle. Most of those employees already lived in Seattle or have since chosen to move to the city, he said.

He also said that the public nature of this process was to give employees the opportunity to actually make alternative arrangements.

Its enabled us to hire new employees between 2015 when we announced it, I think, all the way to when we move in, to know where were going to be and make their housing choices, he said.

By the time we move there, we hope it will be a minimal disruption.