Do Shopping Malls Actually Have a Future in the Seattle Area?

The suburban shopping center faces challenges, and many malls will be shuttered in the next five years. But dont write them off completely. Developers believe an astutely targeted mixed-use property has a prominent place in the retailing mix. 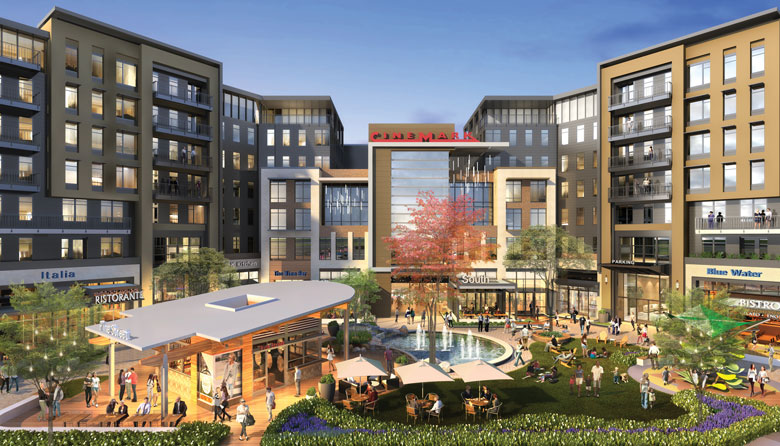 Everyone knows the American shopping mall is dead. The huge department stores that once anchored the nations malls are closed or closing. So are many of the chain stores that used to line the mall corridors between those anchor stores. The consumers who once thronged those corridors now shop from the comfort of their homes, lured by the convenience, pricing and inventory of online services, some offered by those same brick-and-mortar retailers. In some places, entire malls stand vacant. One investment bank says 200 American malls will be bulldozed by 2022.

… Try finding a parking place during the holiday season at the regions shopping malls. Check out the crowds at popular retailers like the Apple store, or whenever a popular, of-the-moment retailer opens a new location.

Perhaps the two biggest validations that theres life remaining in American shopping malls are that the online retailers, those widely credited with the demise of the mall and its traditional tenants, are themselves now opening brick-and-mortar stores in shopping malls, and that property owners are pouring millions into malls, and not just for a new coat of paint or shiny planters.

The American mall is going to live on, but its going to look very different from what it looks like today, says Marcie Merriman, executive director for growth strategy and retail innovation with Ernst & Young in Columbus, Ohio.

The transformation is already well underway at properties in the Seattle area. Simon Property Group, the largest shopping mall operator in the United State, plans a dramatic remaking of Northgate Mall in North Seattle. One of the regions oldest, it will still be a shopping mall, although retail space could be trimmed from close to 1 million square feet now to 500,000 to 700,000 square feet in the new configuration. Added to that, however, will be several hundred units of housing, 500,000 to 750,000 square feet of Class A office space and a hotel.

In the south end of the Puget Sound region, Simon is taking space at Tacoma Mall occupied by a Sears store designated for closing and replacing it with several buildings to hold smaller retail tenants and a new movie theater.

Considered one of the nations most successful retail properties, Kemper Development’s Bellevue Square and the adjoining and connected Lincoln Square and Bellevue Place (marketed jointly as The Bellevue Connection) have grown to more than 5 million square feet of retail, office, hotel, entertainment, dining and residence space. Toward a mall and the right visitors: When it opened in 1950, Northgate Mall was suburban in concept even though it sat inside Seattle city limits. Its owner, Simon Property Group, plans a “reimagining” that will coincide with the arrival of a Northgate light-rail station, changing the mall’s footprint from the traditional, above, to a more urban center encompassing retail, residential and office space, below. Perhaps the most dramatic remake of a retail property can be found in Kirkland, home of the former Totem Lake Mall. A relatively nondescript 35-year-old property is being transformed into the Village at Totem Lake, a mixed-use development designed to combine all the elements of a small town and a suburban mall in one property.

This sort of transformation is what a lot of malls will need to accomplish if they plan to remain relevant, says Fred Bruning, CEO of CenterCal Properties. Totem Lake had fallen out of relevance in part because of other centers built in the area, he says, but also because the way people shop and live is a bit different than it was in the 60s and 70s.
In a 40-year career in retail development, Bruning has seen the life cycle of the American mall. Hes a former real estate director for Sears and helped negotiate leases for that once-dominant retailers locations at Southcenter, Alderwood and Tacoma.

The mall, especially a big regional development of the type that would be anchored by a Sears and other department stores like The Bon Marche (now Macys) or Frederick & Nelson, replaced the tired, dowdy downtown business districts with a variety of stores in one place and acres of free parking.

Malls were new and fresh, he says. It was a big event for a community when one opened.

In their standard barbell configuration of two or four anchor stores at either end of long corridors, [Malls] were the destinations you wanted to seek out and hang out in, says Matt Billerbeck, SVP in the Seattle office of CallisonRTKL and global leader for shopping and entertainment districts at the architectural firm. They pulled together a collection of retailers that didnt exist in your community, put them in one place, with parking. They didnt try to do anything too sophisticated. They just put together great stores with enough amenities to keep you shopping.

And that practice, says Kemper Freeman, contributed to todays problems for malls. One of the biggest mistakes people who own real estate make is to think you have bought an annuity, says the CEO of Kemper Development Company. You have to think of the property as a living organism that you have to continually feed and remodel and update, and if youre not doing that, youre on your way to losing money.

A lack of reinvestment wasnt the only problem malls built in the 50s, 60s and 70s encountered in the 2000s. The United States built far more retail space per consumer than anywhere else.

Weve been overbuilt since the 1990s, Freeman says. I cant explain how it continued to work as well as it did for as long as it did.

Then came the internet. Interestingly, those in the business dont put nearly as much blame on it as conventional thinking might suggest, but with online shopping duplicating much of what could be found at the mall, those properties lost a compelling draw to pull people out of their homes and into their buildings.

Bruning says some department-store leases actually prohibited or limited other uses and activities, such as restaurants (beyond the typical food court). The attempt to keep retail purity was what led to some of the problems malls are having today, he says. It became a very one-dimensional structure. You only came to the mall to do retail shopping and then you left.

The obvious answer is to remake malls into true community hubs and social centers, far more than they were when they were the shopping district of the suburbs.

Thats the plan CenterCal Properties, which bought Totem Lake in 2016, is trying. Most of the existing structure is gone. In its place, CenterCal, whose holdings also include malls in Silverdale and Union Gap, is building offices, 850 luxury apartments, restaurants and movie theaters, constructed around a central plaza/park/public space that people will, theoretically, want to congregate in.

Your more traditional shopping malls that are evolving and doing relatively well tend to be open and form a community, Merriman says. The ones that continue to struggle are the ones that maintain the old footprint. The ones that are succeeding have better spaces and better environments. They feel like little towns rather than a mall.

And yes, even in the internet era, retailing is still an important component, although its share may decline (at the new Totem Lake, the retail square footage will be about half that in the old mall).

The internet is the least of our problems, Freeman declares. I take the position the internet is our friend, not our enemy. Virtually all of our stores have internet activity as well as bricks and mortar.
The two complement each other. Buzz about a new product on the internet, he explains, results in increased traffic in the store. People may do their research online, but many of them want to see what theyre buying firsthand.

Once they get to the store, however, shoppers expect something more than a shelf of goods and uninformed clerks. They expect some related emotional satisfaction from the purchase, Freeman says. They expect the clerks are as well informed about the products as they are.

Retailers not prepared for these new shoppers will suffer.

We can still screw it up with the customer right in front of us if were not on our game, Freeman warns.

People being social animals, they like to shop, and they like to be with other people, Bruning adds. They want shopping to be experiential, whether that means entertainment or a wine bar. Theres a bottom-line component to the synergies of physical and online retailing as well; stores that are demonstration sites or places for customers to order, pick up or return merchandise often entice patrons to make additional purchases while there.

The malls at which they shop will look markedly different from those built in past decades. Many will be true mixed-used properties, with offices and residences onsite, creating self-contained villages. Parking wont get as much emphasis. Simon is looking to tie in Northgate to a planned light rail station; the Village at Totem Lake is next to EvergreenHealth Medical Center and its hospital-office complex; Bruning hopes his development will appeal to those looking to walk or bike to work.

The key is execution, Merriman cautions. The concept [of mixed use] is great, but if you throw it together hoping it works, that never ends pretty.

The mix of tenants will change and expand to include types and uses rarely seen in malls before. Tesla drew lines of people looking to order cars when it opened a showroom in Bellevue Square. Fresh food and groceries as a category of mall tenant has waxed and waned through the years; Bellevue Square and Tacoma Mall both had grocery stores in their earliest days, and prepared foods is a growing category. The former Mervyns space at Westfield Southcenter in Tukwila is now a Seafood City Supermarket, specializing in Filipino and other Asian goods. Gyms, fitness centers and high-end spas are appearing frequently. And online retailers will expand their brand presence and marketing reach with brick-and-mortar stores, as Amazon has done with bookstores and its purchase of Whole Foods. Bruning predicts Amazon will be one of the largest physical-store retailers in the next 15 years.

Churn will continue to be a feature of malls, too. Freeman says its a necessity. He favors turnover of 10 percent to 15 percent in the tenant mix. If its not that much, he says, youre not keeping up with what customers want now.

Mall properties that provide no compelling reason for consumers to come and check out whats new will be in trouble, and that ultimately is OK. As Bruning explains, Retail is not overbuilt. Its underdemolished. Courtesy of the Bellevue Collection

What constitutes a mall, anyway?
Your handy guide to shopping-center identification.

Is there a difference between malls and shopping centers? The International Council of Shopping Centers (ICSC) says there is indeed. It has no fewer than five classifications of general-purpose shopping centers in the United States.

Strip/convenience centers are the smallest and most prevalent type, typified by a row of small storefronts anchored by a convenience store.

Neighborhood centers are convenience oriented, usually anchored by a supermarket.

Regional malls, up to 800,000 square feet, are enclosed with inward-facing stores connected by a common walkway, with full-line or junior department stores as anchors.

Super-regional malls are similar in concept to regional malls but offer more variety and assortment and are usually larger than 800,000 square feet. Bellevue Square, above, is an example.

The ICSC also has categories for “specialized-purpose centers,” including power centers, lifestyle centers, factory-outlet malls and theme/festival centers. Add airport retail and you get nearly 116,000 shopping centers in the United States and 7.6 billion square feet of gross leasable area.