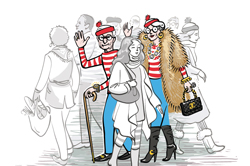 RETAILING > Higher and Higher
Washington voters who thought they would get a price break on booze when they voted to break up the state monopoly on liquor sales got an unpleasant surprise in June when private store sales went into effect. An unscientific Seattle Times survey indicated about half of 170 prices reported by its readers were higher than they had been at state liquor stores, and about half were lower. Some irritated buyers called the results outrageous. Others called the retailers deceptive. It might have been the Washington State Liquor Control Boards last laugh. D.V.

BRANDING > Ballmers Going To Be Angry!
Microsoft grabbed headlines and generated buzz when it announced it was changing its 25 year-old logo, but the excitement died down quickly once the new logo was unveiled. Its not all that surprising, given that the new logo merely thinned out the font used for the companys name and changed the wavy, four-colored window to a flat one. Many wondered why Microsoft bothered. As it turns out, the change became necessary when a summer intern dropped the trademark off for its annual dry cleaning and returned to discover the cleaners had laundered it, pressed it and used way too much starch. D.V.

ADVERTISING > Hu Needz Editers?
When Starbucks opened its first Evolution Fresh juice bar at Bellevue Square earlier this year, it proudly did so with a large sign touting the health benefits of fruits and vegatables. The misspelling might not have been so bad if the company hadnt included an image of the sign in its press and internet marketing materials. D.V.

LAW > Nordstrom Has Its Limits
Weve all heard the stories about Nordstroms legendary customer service and its willingness to accept returns years after an items purchase. It has always seemed that there were no limits to the companys courtesy. That was before Nordstrom met the brothers Chiu and lost $1.4 million. Andrew and Allen Chiu were banned from Nordstrom.com in 2008 for ordering merchandise, then claiming it never arrived and asking for refunds. Yet they still managed to take the Seattle-based retailer for a long, expensive ride. The Chius joined the internet rebates site FatWallet and started shopping again. Thanks to agreements that sites like FatWallet have with major retailers, members can order merchandise and get a small percentage of the purchase price back in the form of a rebate. Thats exactly what the brothers were trying to do when they started ordering from Nordstrom again. Although the once-scorned fashion retailer routinely rejected their orders without charging their credit cards, a computer programming error prompted Nordstrom to pay a commission to FatWallet, which dutifully passed a portion of it on to the devious duo in the form of a cash-back award. In a buying binge from January 2010 to October 2011, the brothers racked up $23 million worth of failed transactions, generating $1.4 million for FatWallet and a cool $650,000 for themselves. While theres no word what finally did them in, the brothers ended up pleading guilty to wire fraud, had $970,000 in assets seized by the U.S. Attorneys office and were sentenced to two years in prison. D.V.

REAL ESTATE > Location, Location, Location
Three years after the financial empire of real estate developer Michael Mastro started collapsing, and about 16 months after Mastro and his wife, Linda, disappeared, the story that keeps on giving took another turn when the Mastros were arrested in France. In case you just joined this saga, the Mastros skipped town last year when a bankruptcy judge ordered that two diamond rings valued at $1.4 million were the property of Mastros creditors, who are owed approximately $250 million in an investment scheme that unraveled as the economy collapsed. The day the rings were due to be turned over, both the jewelry and the Mastros disappeared. French police arrested them at Lake Annecy in the French Alps in late October. The couple intends to fight extradition to the United States. A French newspaper reported that the couple had been renting a house under their own names in Doussard, at the south end of the lake, and had been living in the area for about a year. At their last residence, their name was on the mailbox. Apparently there is no truth to the rumor that the Mastros success in avoiding detection for so long has a publisher considering changing the name of the Wheres Waldo? books to Wheres Mastro? D.V.