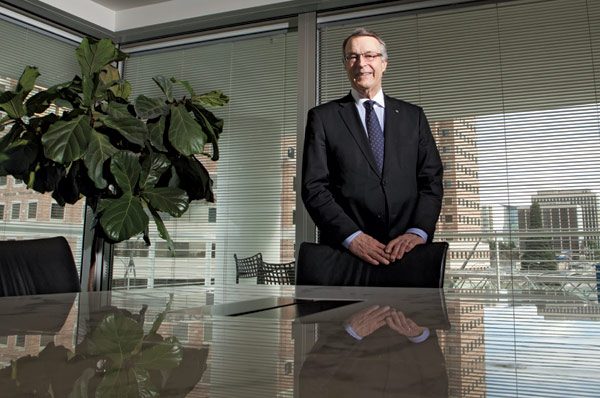 Ever since Miller Freeman moved from Seattle to the rural Eastside in 1927, his family’s fate and fortune have been closely entwined with Bellevue’s. Miller Freeman’s son and grandson helped transform the farming hamlet into a bedroom community and then into a major commercial center with its own bustling malls and skyscrapers.

Now, as Bellevue takes the next steps toward becoming a major metropolitan center in its own right, not everybody is sure grandson Kemper Freeman Jr. should play the same pivotal role in shaping the city’s destiny as he has had in shaping its present.

Consider the issue of public transit, deemed critical to the future of Bellevue, which is Washington state’s fifth-largest city (population: 123,000). Last fall, voters defeated a Freeman-backed public referendum to prevent a light rail line from linking Seattle and Bellevue. And in February 2011, Freeman split with the Bellevue Downtown Association, which his father helped found in 1974, in part because of the association’s support for light rail.

While Freeman has lost some recent battles, allies and critics agree that the 70-year-old Harley-riding real estate magnate is still a force to be reckoned with. “He is highly relevant and will remain so for a long, long time,” says Bellevue City Council member John Chelminiak, who won a council race against a Freeman-backed opponent last November.

Those who know Freeman well say he is an engaging straight shooter who is smart, hard-working and always well prepared. “He is a very gracious man and a gentleman,” says Greg Johnson, president of Seattle-based Wright Runstad & Co., who is on the other side of the battle with Freeman over light rail. Johnson’s real estate development company is developing Spring District, a 36-acre mixed-use urban neighborhood planned for the old Safeway Distribution Center in Bellevue’s Bel-Red Corridor, which comprises 27 percent of the commercial and industrial zoned land in Bellevue. The project’s success depends heavily on the completion of a light rail line from Seattle to Bellevue, and eventually to Redmond, and Wright Runstad was a key supporter of a slate of city council candidates who successfully ran against the candidates supported by Freeman.

It’s ironic that Kemper Freeman Jr. would ever be on the other side of someone promoting development in Bellevue. But Freeman tends to focus his interests on a small part of the city: downtown Bellevue. Freeman is owner and developer of the Bellevue Collection, a 50-acre area of downtown that includes Bellevue Square, Bellevue Place and Lincoln Square. Those 50 acres—the heart of downtown Bellevue—contain 4 million square feet of commercial space and include roughly 250 stores, about 20 sit-down restaurants and just as many fast-food options, two hotels and a 16-screen cinema. The site also offers 10,000 free parking spaces, a huge competitive advantage that draws shoppers away from downtown Seattle and its expensive parking.

Few doubt Freeman’s commitment to Bellevue. Last year, when it looked as if his heavy campaign spending on the light rail issue might be canceled out by Microsoft, which is strongly in favor of light rail, Freeman agreed with Microsoft that the two should each donate $1 million instead toward construction of the $160 million Tateuchi Center, a 2,000-seat concert hall and 250-seat cabaret that will boost Bellevue’s attractiveness as a city center. Freeman has been a strong supporter of the project and earlier donated close to $12 million worth of downtown land for the center.

The Freeman family’s stake in Bellevue dates back to 1897, when Miller Freeman, Kemper Jr.’s grandfather, moved to Seattle with little more than $3 and a bicycle. Miller Freeman, who had become estranged from his father, a Yakima newspaperman, built a small chain of niche business publications. He became politically active in the region, pushing for construction of the shipping canal to create a waterway connecting Lake Washington to Puget Sound and a floating bridge across Lake Washington to connect Seattle, Mercer Island and Bellevue. He moved his family from Seattle to the Medina area in 1927.

Miller Freeman was a controversial man who railed against Japanese immigrants and organized associations as early as 1916 that targeted Japanese Americans. But David Neiwert, author of Strawberry Days, says there is no evidence to support the belief that Freeman benefited from the relocation of Japanese Americans to internment camps during World War II. It was from a prominent white landowner that Freeman bought the 10 acres of land that his son, Kemper Sr., used to build a shopping center in 1946.

That shopping center, Bellevue Square, would help to create a downtown for Bellevue and become the first of the Freeman family’s extensive landholdings in the area. Kemper Sr. was also civically active, playing a key role in building Overlake Medical Center, Bellevue’s first hospital.

Although the three Freeman generations have all promoted Bellevue’s development, there has often been tension among them. “The only thing that I knew in my life is that I’d never work for my dad,” says Kemper Freeman Jr., who ended up working for his dad. And the family tradition continues: Freeman’s two daughters are executives in his company.

Freeman, a former state legislator, believes there is plenty of room for downtown Bellevue to grow. He plans to add up to 4 million square feet of new stores, residences, hotels and restaurants over the next 10 years—ready to adjust to whatever the unfolding economic picture allows. Freeman says he loves to study how pieces fit together to make something work. To build the Bellevue Collection, he kept track of shoppers’ changing tastes as well as the psychology of retail tenants. A shop next to an anchor store has to operate differently than one on a side corridor. You have to have a strong retail core before you can begin attracting restaurants and hotels. A lot of success, Freeman says, lies in knowing when to wait and when to take a bet.

Freeman avoided the huge losses suffered by rival Dan Ivanoff, who founded Schnitzer West and whose high-end shopping center, The Bravern, struggled after opened just as the economy plunged into a deep recession. “I’d characterize [Freeman] as an expert of national renown in developing commercial real estate,” says Johnson of Wright Runstad. “He has his fingers on the pulse of the shoppers.”

Bob Wallace, another Bellevue commercial property baron and Freeman ally, is impressed by Freeman’s thoroughness: “He does his homework,” Wallace says. “Once he makes up his mind, he doesn’t change it, and 99 percent of the time, it works.”

Freeman doesn’t disagree. “If I get an epiphany in the shower,” he says, “the first thing I do is get an expert … to find out if my epiphany is worth screwing around with.” So why is Freeman so adamantly opposed to light rail?

For one thing, he says there has never been a train built across a floating bridge and there could be all kinds of unforeseen problems. He thinks, for example, that constructing the rail line would require removing so much concrete that it would weaken the structure. And with Bellevue so spread out, he believes residents are best served by cars and buses.

“A bus can be just as fancy and efficient and environmentally friendly as any rail car,” he says.

Freeman filed a lawsuit in 2009 arguing that state gasoline-tax money was used to build the I-90 bridge and that the bridge should not be used for any purpose other than a highway. Last year, the Washington Supreme Court sent the suit to a lower court, which ruled in March that Sound Transit’s plan was legal. Freeman also joined with initiative gadfly Tim Eyman last year to sponsor a statewide ballot measure to fight light rail, contributing 81 percent of the $1.347 million the campaign raised. The initiative lost 53 percent to 47 percent. In the two Eastside state legislative districts that include Bellevue, it lost 61 percent to 39 percent.

Freeman, who sees himself as something of a maverick, says he lost to “this strange coalition of big government and big business” that outspent his campaign. But developer Wallace says Eyman’s controversial reputation hurt Freeman’s cause. “He got tarred with the same brush,” Wallace says.

Last October, The Seattle Times ran a story portraying the council races as a conflict between dueling developers: those such as Freeman and Wallace interested in maintaining downtown Bellevue as the city’s commercial sector, and those such as Wright Runstad’s Johnson who have a major interest in developing new transit-oriented centers such as the Bel-Red Corridor to the east. Both Freeman and Johnson contend the dueling developers characterization was overplayed. Wallace notes that he also owns property to be developed in Bel-Red. Freeman says his concern with the Bel-Red Corridor is that the city has not done sufficient planning to develop it.

Chelminiak believes Freeman opposes Bel-Red development because it will compete with his downtown properties. “Kemper has always gone out and tried to kill any competition,” says Chelminiak. “From the city’s standpoint, we don’t think they handicap each other. They complement each other.”

For decades, the Freeman family has helped Bellevue evolve into what it is today. And observers say Freeman has been good at reading how the economy and shoppers’ habits have changed to mold and remold the Bellevue Collection complex to keep current with the times.

In recent years, Bellevue has been evolving again. Its leasable office space has grown 45 percent since 2000, some of it accommodating 6,500 Microsoft employees occupying 1.3 million square feet of new commercial space. In 1990, 13.3 percent of the city’s population was foreign born. By 2010, that figure had risen to 30.5 percent, according to Bellevue Chamber of Commerce figures.

Today, more people work in Bellevue than live there. Chamber of Commerce figures put the population at slightly more than 123,000. The Puget Sound Regional Council puts the number of jobs at 131,000. And the city’s Planning and Community Development Department estimates the number of people in the city during the day at roughly 200,000. Also, the greater downtown area has become more residential.

Chelminiak contends Freeman has not understood that central Bellevue has changed as more people have begun to live in the area. “Shoppers and residents don’t think the same. I don’t think people have picked up on this dynamic. … Bellevue would not be the city it is without Kemper Freeman. But we’re beyond the point where he thought it would be,” Chelminiak said.

Freeman insists he still knows what’s best for Bellevue. He says he and his firm are continually researching the public and economy. And he has bet hundreds of millions of dollars based on that research.

“If I’m wrong,” he says, “I’ll have trouble paying the mortgage.”

And to any doubters out there, Freeman points to his track record. “We’ve done a pretty good job,” he says, “of building what people want.”