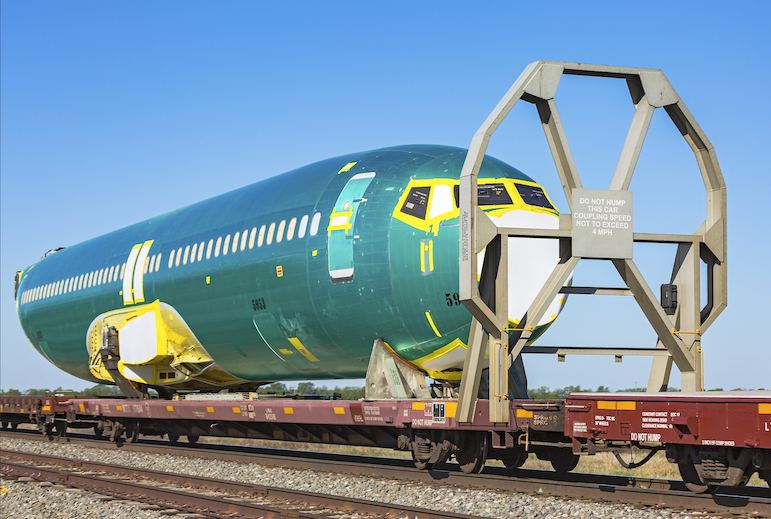 The Boeing 737 aircraft fuselage train transporting 737 fuselages on specially modified freight railcars passes the town of Walton near the start of its journey from Spirit Aerosystems (Boeing) in Wichita Kansas, to aircraft assembly plants in Renton and Everett near Seattle.

Beleaguered aircraft manufacturer the Boeing Co. is temporarily suspending production operations in the Puget Sound for 14 days “to protect our employees and the communities where they live and work,” the company announced.

Puget Sound Boeing employees who can work from home will continue to do so, but those who are unable to work remotely will continue to receive paid leave for the first 10 days, covering the work days during the 14-day the suspension period.

“We continue to work closely with public health officials, and we’re in contact with our customers, suppliers and other stakeholders who are affected by this temporary suspension,” Boeing President and Chief Executive Officer Dave Calhoun says. “We regret the difficulty this will cause them, as well as our employees, but it’s vital to maintain health and safety for all those who support our products and services, and to assist in the national effort to combat the spread of COVID-19.”

As of this past Sunday, March 22, a total of 29 employees had tested positive for COVID-19 infections, and one had died of the infection, according to media reports.

Prior to the onslaught of the coronavirus crisis, Boeing had already suspended production of new 737 Max aircraft starting in January 2020, indicating then that it planned to prioritize the delivery of the 400 aircraft it now has in storage. Prior to suspending production of the 737 Max, the  company had continued to assemble about 40 of the 737 Max aircraft a month at the plant in the wake of the passenger jet’s grounding this in March 2019 following two fatal crashes in Indonesia and Ethiopia in less than half a year that together claimed the lives of 346 people.

Boeing said in January that no layoffs or furloughs were expected. The coronavirus outbreak has clearly changed those plans. Boeing’s factory in Renton where the planes are produced employs 12,000 workers across three shifts. Statewide, as of Jan. 1, Boeing employed nearly 72,000 people, including its operations in Everette.

“When the [current] suspension is lifted, Boeing will take an orderly approach to restarting production with a focus on safety, quality and meeting customer commitments,” the company says. “This will be a key step to enabling the aerospace sector to bridge to recovery.”